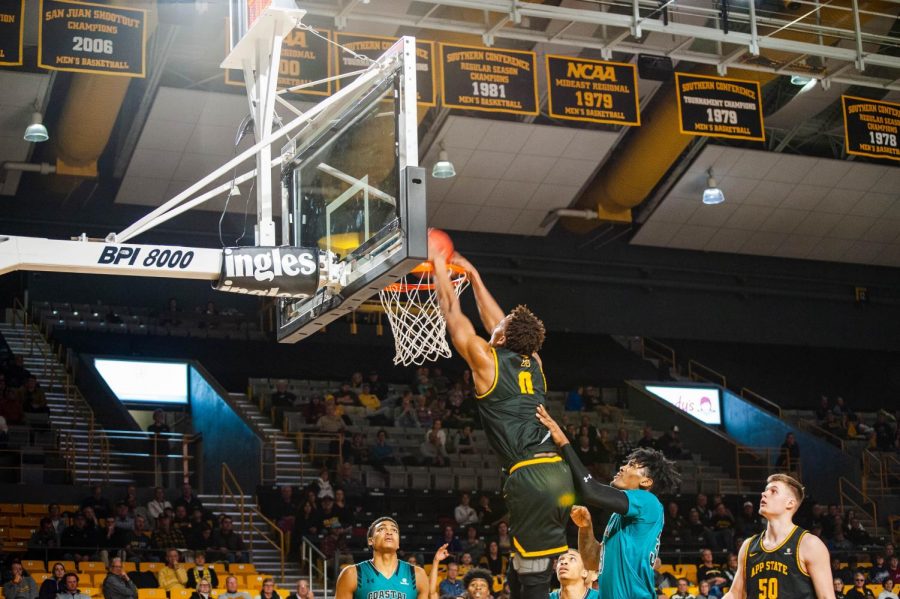 Senior forward Isaac Johnson dunks the ball over a defender in the Mountaineer's game against Coastal Carolina. Johnson recently scored his 1000th career point this season and feels it "is a blessing."

With 16:50 left to play against Georgia Southern, senior forward Isaac Johnson flew down the lane and slammed home his 1,000th career point, a feat only accomplished by 33 Mountaineers before him.

“It was the greatest feeling,” Johnson said. “Being able to reach a milestone that not a lot of people make is a blessing. I just thank my teammates, all my coaches, and I’m just happy to get that.”

Johnson grew up in Charlotte with his two parents, Ronnie and Vanessa Johnson, and his two sisters, Varonica and Tierra. He was introduced to many sports at a young age because of his family’s love for track and his father’s career in the NFL with the Chicago Bears.

“I played almost every sport … basketball, track, T-ball,” Johnson said. “My whole family ran track, so we did a lot of that.”

Family is important to Johnson, and he credits his family’s love and support as his purpose for playing basketball.

“They’re the main reason I play basketball. I just want to make them proud,” Johnson said. “My family, not just my parents, have been a big help for me on and off the court.”

More specifically, Johnson has always seen his father as a role model, and someone to look up to as an example.

“After work, he goes to help me if I need to get shots up or coach me in track or basketball,” Johnson said. “It didn’t really matter, he would still give 100% every day.”

Johnson said he loved growing up in Charlotte, and it’s an amazing place to raise a family.

“Growing up, I didn’t get in a lot of trouble, so it was easy to get to know Charlotte, and I love it,” Johnson said.

It wasn’t until his uncle recommended it that Johnson began to play basketball. However, he didn’t start to take the game seriously until middle school, playing for Providence Day and for an AAU travel team.

“Every coach has brought something to my game that I can emphasize more to become a better player,” Johnson said.

Johnson played all four years of his high school career on the varsity team at Providence Day, winning nearly 85% of games. In 2016, he helped lead the Chargers to their first 3-A state championship since 1999. The multi-sport athlete was named second-team all-conference during his senior year, and was named South Charlotte Weekly’s Track and Field Athlete of the Year. He competed in seven events, including the 100m, 200m, 110m hurdles, 300m hurdles, 4×100 relay, 4×200 relay, and high jump.

After his successful high school career, Johnson was off to the High Country to join the Mountaineers.

“I really liked the team, and I really liked how close-knit they were. I liked how they were like a family, so when I came, I just wanted to be a part of a family and have fun,” Johnson said. “I just like the atmosphere, and I also liked the scenery outside of Boone. Just coming up and seeing the mountains, and we get a lot of snow, so it’s great to see the snow with the scenery.”

Johnson has gone on to start for three years and lead the Mountaineers in rebounding all four years of his time at App State.

“This season has been great. The crowd has been improving every game, and we just love the energy and the atmosphere for this year,” Johnson said.

With his career coming to a close, Johnson said he wants to finish strong and continue to emphasize one game at a time. The Mountaineers will take on ULM in their final game of the regular season. With a win at ULM or UT Arlington loss to Troy, the Mountaineers will clinch the No. 6 seed in the Sun Belt Tournament and open play on Monday in Boone. App State will be the No. 7 seed with a loss at ULM and a UT Arlington victory over Troy.

“We have a chance to do something we’ve never done before here. I want to come out of my senior season with one of the best seasons of my four years,” Johnson said. “I just love how we focus on every game. We don’t focus on the game two weeks ahead. We just focus on one game at a time.”

Johnson will graduate with a sustainable technology major and a general business minor, and plans to pursue a future in basketball.

“I want to see how far basketball will take me, either overseas or in the States. I want to graduate for sure,” Johnson said.