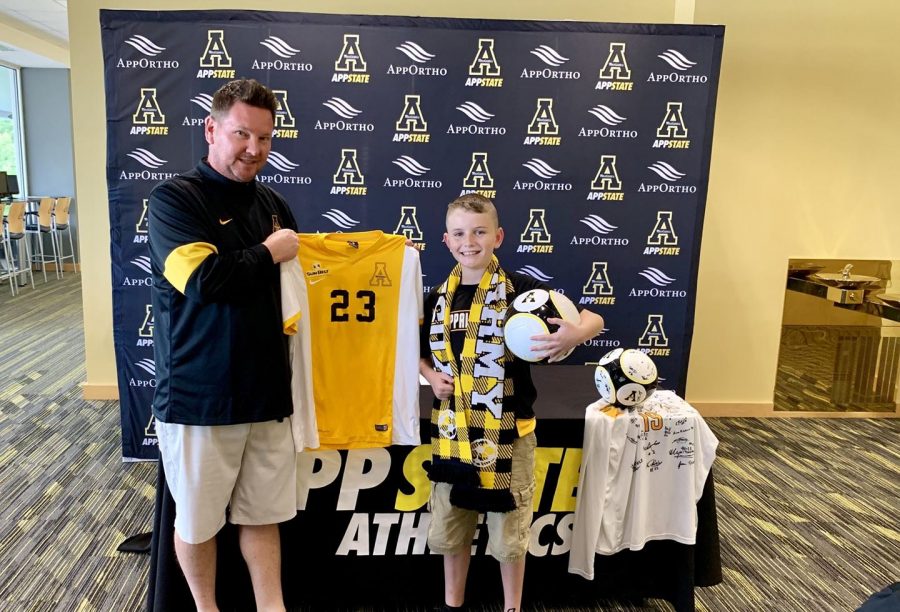 “Jacob is going to add a lot of things to our program,” O’Keefe said. “His passion, courage and intelligence all fall in line with our core values.”

Brown is participating in the Team IMPACT program, a national nonprofit organization that “connects children facing serious and chronic illnesses with local college athletic teams, forming life-long bonds and life-changing outcomes,” according to its website.

“Jacob is going to enjoy it, and he’s going to get a lot out of it, but we’re going to get tenfold out of being around him, getting to know him,” O’Keefe said. “He’s going to be a constant reminder to show up everyday with a big smile and just live life because that’s what he does.”

O’Keefe and the team’s leadership group met with Brown for the first time two weeks before the team’s first scrimmage of the year on August 16, O’Keefe said.

“He had stitches from the opening minute. We ended up scheduling an hour, and we actually stayed two hours,” O’Keefe said. “He’s fitting in great, (we’re) looking forward to having him on this journey with us. ”

Brown will participate in pre-game meals, training sessions, home games, team-building activities and travel with the team to local away games.

O’Keefe knows Brown will play a big part in the Mountaineers’ lives, but he wants his team to play a role in Brown’s life, too.

“We’ll try and figure out what we can get involved with in his life,” O’Keefe said. “It’s going to be about going and giving back in his world, as well, and then it really starts to take a whole other level, and we all get so much more out of it.”

App State had a turnaround campaign in 2018 and finished the year with an 8-6-3 record, its first season with a winning percentage better than .500 since 2012. The 2018 team was youthful and only lost three graduating seniors.

The majority of the nucleus is back for 2019, and Brown is sure to have a great experience with the Mountaineers.

“Having 11 home games and hosting the Sun Belt Tournament, there’s going to be a lot of opportunities for him to see a handful of games and be a big part of the team,” O’Keefe said.