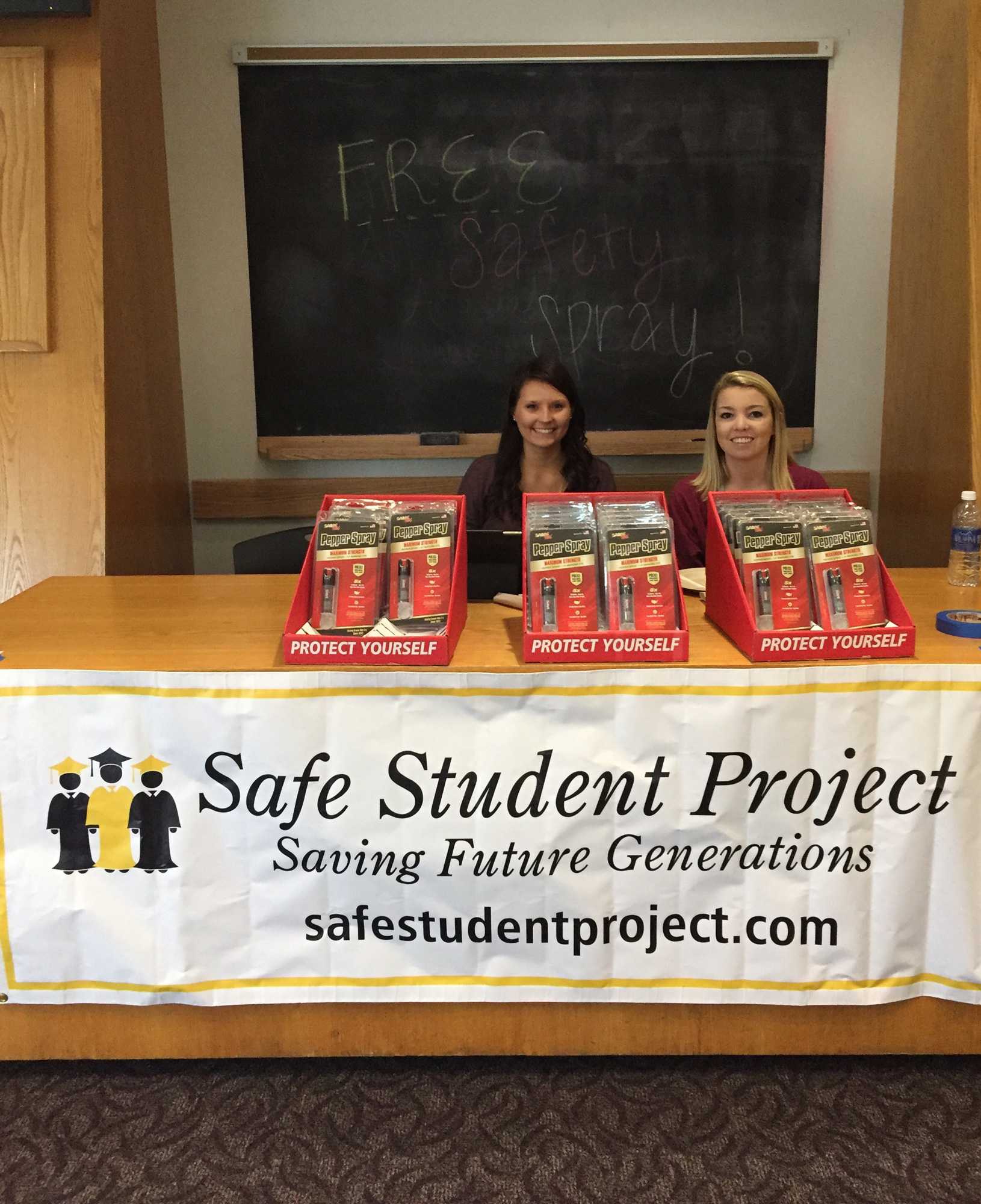 Kristen Howell and Sara Bailey of the Safe Student Project with some of the pepper spray they give out for free at the project’s sessions. They give about out 30-50 units per session and host them at least once a semester. Photo courtesy of Kritsen Howell.

Two Appalachian State seniors are offering a sense of security to students and staff by equipping students with free pepper spray and self-defense classes through the Safe Student Project, a new club and local business they started toward the end of spring 2015.

Kristen Howell, senior marketing major and president of SSP, and Sara Bailey, senior risk management and insurance major and vice president of SSP, formed the club with help from the campus police in response to the violence and sexual assaults that were reported on campus last year.

“We just felt that was the right time to do it,” Howell said. “I feel like there are people out there doing something about it, but not as proactive as they need to be.”

Howell and Bailey lead two hour sessions at least once per semester. About 30-50 units of pepper spray are handed out per session completely free. At retail price, pepper spray sells for about $15, Bailey said.

Funding for the club that allows them to give out free pepper spray comes from sponsors such as the Winkler Organization, New River Tire and Auto Company, Alpine Insurance Company and others. Individuals also donate money in support of SSP’s mission.

“You can’t really pass out things like brass knuckles or knives and be like ‘Here, protect yourself,’” Bailey said. “[Pepper spray] is also nice because it has a dye in it. If you spray someone with pepper spray it dyes their face for about a week and it’s really hard to get off, so the police can identify them.”

As opposed to weapons like guns and knives, pepper spray is actually the only weapon that students are legally allowed to have in their possession, according to Bailey.

One of the struggles the club has faced is getting males to take the pepper spray for themselves.

“People should know that it’s not just for girls,” Howell said. “A lot of guys will be like ‘I’ll give it to my girlfriend,’ and that’s great but you can only fight so much. When someone comes up to you with a weapon there’s only so much you can do with a punch.”

Still, SSP is working to partner with the Boone Docks Mixed Martial Arts, a club that focuses on the culmination of several self-defense styles into an effective system, said Spencer Reeves, manager and head Brazilian Jiu Jitsu coach.

Reeves said he met with the leaders of SSP at the Winter Club Expo and instantly thought both organizations could benefit from partnering, especially since all branches of martial arts were founded as a reason to give people the confidence and technical ability to protect themselves in a worst case scenario of physical confrontation.

“I believe that everyone, in school or not, has the right to feel safe at all times,” Reeves said. “As someone who teaches self-defense for a living, I was interested in offering to help them out with training the people in their organization. After talking for a while, we found that we were all on the same page and are currently figuring out how best to come together.”

Currently, classes led by Boone Docks Mixed Martial Arts consist of about 20 students. Plans are being made to organize self-defense seminars for students.

“We are hoping to introduce people to the martial arts in a way that will give them some skills and confidence as well as encouraging them to continue their martial arts and self-defense journey outside of the set seminars,” Reeves said. “[We] take pride in knowing that every student that comes through the door is one less potential victim.”

Howell and Bailey also have long-term goals that will help to grow the club as well as raise awareness on preventative measures against sexual assault and other types of violence.

Some goals include presenting at freshmen orientation and selling pepper spray and drink test kits through their website to raise funds in support of the cause.

“We just want to raise awareness in general,” Howell said. “You don’t think something is going to happen to you unless something does happen. It’s about thinking about it before it gets to that point.”