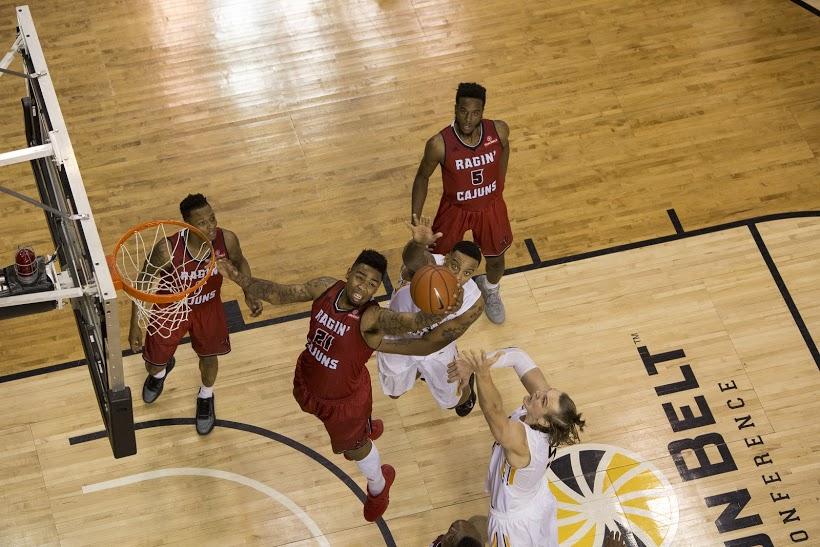 As the Louisiana Lafayette Ragin’ Cajuns stomped into the Holmes Convocation Center Thursday night, they looked to extend their seven-game winning streak. The first half of the game told one story, but it was the second half that saw the conference matchup become compelling and heated. In the end, however, App State would fall to the Ragin’ Cajuns 87 to 76.

The Appalachian State Mountaineers jumped ahead following the tip-off with a 3-pointer from Ronshad Shabazz. Following the three, however, points weren’t easy to come by for the Mountaineers. Frank Eaves, who currently leads the team with 20 points per game, was cold starting from the field — going 0-4 on his first shots and only managing to sink one of two free throws with his first trip to the line. Eaves finished the half 1-9 from the field and 0-3 from 3-point range, but managed the majority of his seven points from the charity stripe, going 5-8.

The first half saw the Ragin’ Cajuns shoot 60 percent from the field and establish themselves as a major force inside, scoring 30 of their 52 points in the paint. Despite Lafayette’s numerous trips to the free throw line, they only managed to shoot 13-24.

Lafayette did not let down in the first half and went on a 14-2 tear until Griffin Kinney managed some inside layups. Nothing halted the Ragin’ Cajun’s momentum in the first, however, because whether they shot a three, worked in a jumper from the elbow, or found a lane to the basket, the ball either went in or they were fouled.

The first half was also a story of careless ball handling by the Mountaineers which resulted in seven turnovers and 18 points off turnovers for the Ragin’ Cajuns.

“I thought we missed a lot of easy shots at the basket,” Fox said.  He continued to say that the team wasn’t poised and balanced and as a result, it cost them. “We missed ones at the basket and not only does it cost you two points, but its a little bit deflating also in that we have a chance right there point blank and then we have to go back and play defense again.”

Coming out of the gate in the second half, the Mountaineers visibly looked like a completely different team. The scoring for App State started with a layup from Kinney, and then the Holmes Convocation Center finally became energized as Tyrell Johnson hit a 3-pointer. Twenty seconds later Chris Burgess followed the sequence with a three of his own.

Slowly but surely the Mountaineers began to cut their deficit.  Five minutes into the second half, freshman Ronshad Shabazz would drain a three that would cut the Ragin’ Cajun’s lead to 14 and Eaves would head to the free throw line shortly after to cut the deficit to 12.

The Mountaineers would prove to be more defensively sound in the second half and found more success in the paint as well.

With eight minutes and change remaining, Burgess would show some fancy hand work only to sink a pull-up three right after to cut the lead to just 10. The made shot would be part of an 11-3 run.

With just over 6 minutes left, Jacob Lawson stopped Shawn Long at the rim with his only rejection of the game, but one that would send elation into the crowd with the Mountaineers down 77-70.

As time continued to tick down, Eaves rolled in a layup to cut the deficit to four.

Four points, however, would be the closest the Mountaineers got as the Ragin’ Cajuns would go on a 9-2 run to finish the game.

Although the Mountaineers didn’t come out on the winning side, they found a way to be more aggressive in the second half — something they’ve struggled with all season. A big turning point, other than Johnson and Burgess’ 3-pointers, was the switch to the 1-3-1 zone, which often saw a double team on Long, who ended the night with a double double scoring 19 points and grabbing 10 boards.

“They were used to us playing man and it was hard to guard the bigs down low,” Shabazz said. “It was throwing something different at them to kind of throw them off and it helped us rebound a little more.”

Shabazz finished the night with 18 points, five rebounds and two steals. He’s currently second on the team in scoring with 11 points per game.

“He’s done everything we’ve asked and more,” Fox said. “It’s absolutely incredible what he’s done and he still has a long way to go and a lot to learn, but the good thing about him is he’s such a sponge and he’ll get it done.”

“Coach ripped into us at the half, talking about not taking care of the ball,” Kinney said. “It shouldn’t take a horrible half of basketball to realize what we’re doing wrong.  When we had our run in the second half it wasn’t anything special, it’s what we do all the time. We just played within the system.”

The Mountaineers hope to have a better outcome at home as they face the UL-Monroe Warhawks at the Holmes Convocation Center at 3:30 p.m. on Saturday.