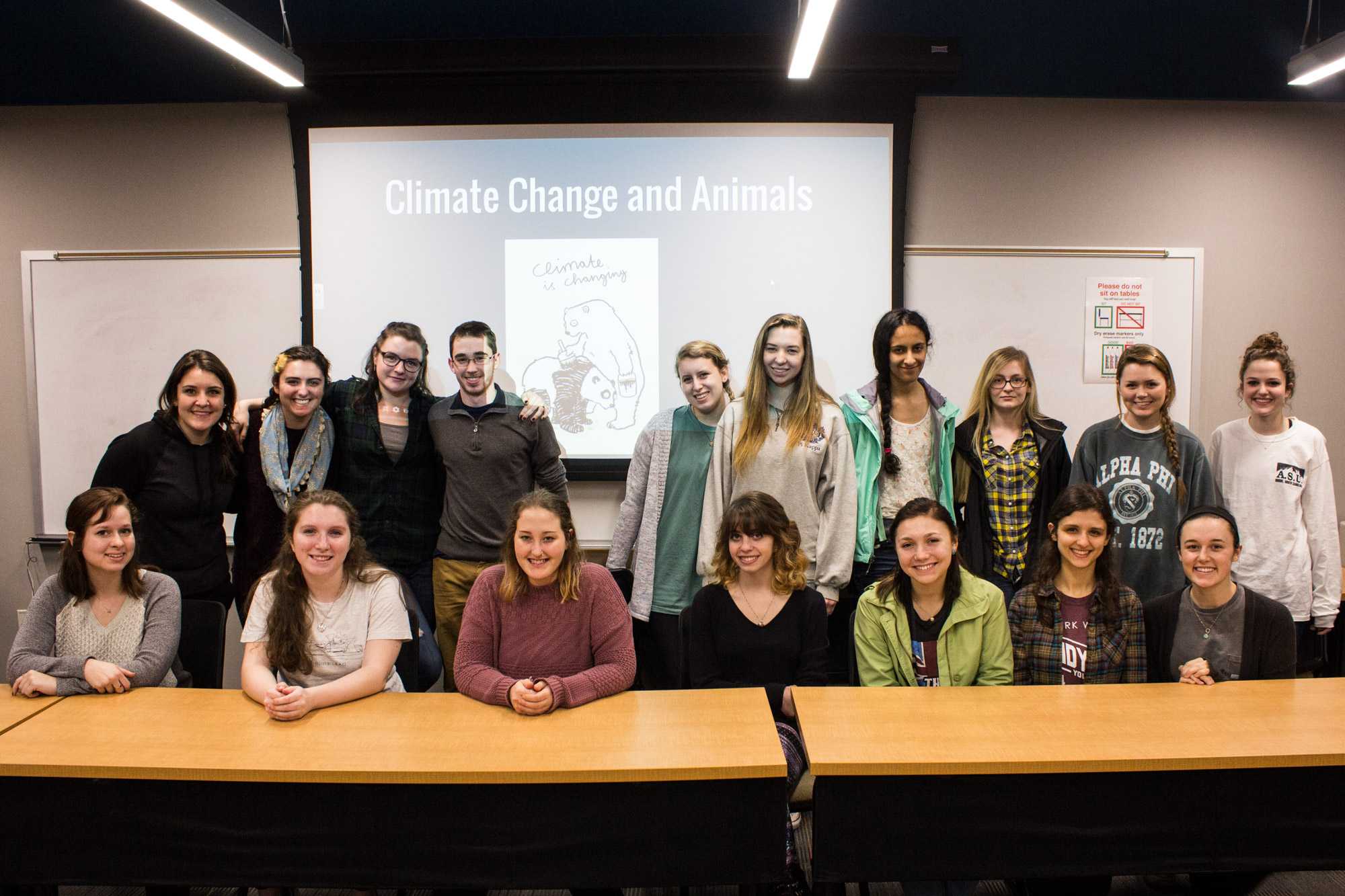 The Animal Welfare Club met in Linville Gorge on Tuesday evening. The club talks about the welfare of animals and often members volunteer at the local Humane Society. Photo by Halle Keighton.

On a campus that prides itself in making great efforts to be sustainable, one club is trying to reach out about the importance of including animal rights in the sustainability conversation.

The Animal Welfare Club, founded in 2014 by its president Madalene Smith, spreads awareness about animal rights and environmental issues including the use of animal products, the effects of animal agriculture and testing or experimenting on animals.

“I founded it because there were no animal rights clubs on campus,” Smith, a junior advertising major, said. “I felt like a lot of people would be interested and could get behind it.”

The Animal Welfare Club meets at 7:30 p.m. every other Tuesday in the Linville Gorge room of the Plemmons Student Union. During a typical meeting, the club watches a presentation by Smith or one of the other members, followed by a discussion.

The topics of these presentations vary depending on what the different presenters are passionate about, and can range from hunting to factory farming to domesticated animals.

Several of the club’s members also participate in other animal-related groups, ranging from national organizations to the local Humane Society.

Hannah Kinder, a senior biology major and the club’s event planner and social media officer, is a campus representative for PETA. PETA sometimes sends Kinder its own materials for campus outreach, but she often comes up with her own ideas and incorporates the Animal Welfare Club into them.

“For Valentine’s Day, PETA sent me vegan chocolates to pass out,” Kinder said. “I just expanded that into an entire week, Love Week, where I talked about loving animals better.”

She partnered with Full Circle Farm Sanctuary, a nonprofit organization located in western North Carolina, for Love Week. Students made valentines for the animals at the sanctuary and Kinder educated about the importance of spaying and neutering among other topics.

Madeline Lippy, a sophomore nutrition major and member of the Animal Welfare Club, is also a campus organizer for the Humane League, a nonprofit dedicated to fighting animal cruelty.

Lippy spreads awareness of animal rights subjects and promotes Humane League campaigns around campus. One of these campaigns is Meatless Monday, in which students pledge to go vegetarian for one day a week.

“I read this book about animal activism, and it had a quote that stood out to me,” Lippy said. “It talked about how someday, no one will use animal products anymore. But if we go our whole lives doing things to move that day just one day closer, then we can really make a difference.”

However, members of the Animal Welfare Club acknowledge that it can be very difficult to get people to adjust their lifestyles in order to better the environment.

“I think people just really don’t want to change their diets,” Smith said. “They’re in denial about it being harmful.”

Kinder said many people on campus have a blind spot when it comes to sustainability. Though Appalachian State is one of the greenest schools in the U.S. according to Sierra magazine’s 2014 list of sustainable universities, there is less emphasis on animals and factory farming’s effect on the environment. Factory farms are industrial operations that raise large amounts of animals for food; they focus on profit and efficiency at the expense of the animals’ welfare, according to the American Society for the Prevention of Cruelty to Animals.

“Everyone talks about sustainability and being so concerned about the environment, but what they don’t realize is animal agriculture is literally destroying the planet,” Kinder said. “I think educating about that is important. It should definitely be a part of the campus conversation.”

Despite the topic of animal rights being a huge global issue, the Animal Welfare Club prides itself in taking small steps to enact change locally, Smith said. Although she previously felt powerless as an individual to fight all of the harm being done, she recognizes that the club can make a difference simply by reaching out to the community.

“I know we don’t do a whole lot for animals, like we don’t go to Africa to stop poachers or anything, but I like to think I’m educating people through presentations so they can spread the word locally,” Smith said. “I just want to do as much as I can for the animals around me.”