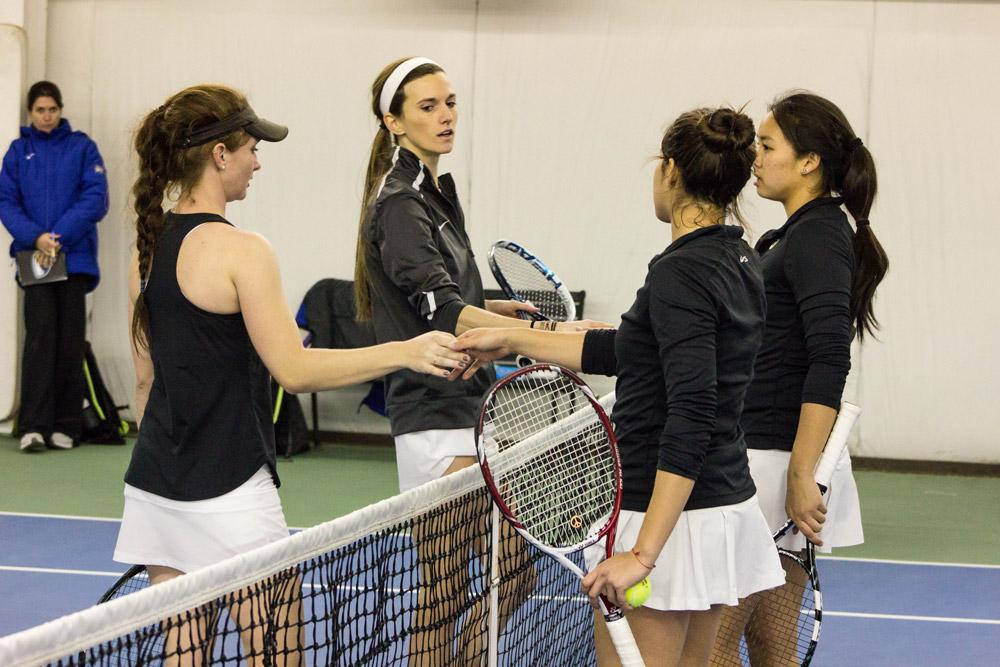 Taylor Bygrave, freshman, and her teammate Mackenzie LaSure, senior shake hands with the Emory Univeristy players after their doubles competition on Saturday, February 27th. The game resulted in App State loosing 7-2 in a tie breaker match. Photo by Halle Keighton.

Traveling 9,567 miles from her home in Queensland, Australia, to play college tennis at Appalachian State has been a whirlwind of change for App State freshman Taylor Bygrave.

Coming out of high school ranked in the top 200 high school tennis players (No. 146) in Australia, No. 7 in Queensland in her age bracket and a four-time regional selection, Bygrave did not have the same experience that most American high school athletes receive.

“We do not have tennis in high school but we try out one day a year and there is one tournament which is all the tennis for the year,” Bygrave said.

Coached by her parents Trish and Rob, both former Australian tennis players, Bygrave wanted to do something her parents never had the opportunity to do: play in the U.S.

“Basically the goal was to get to the U.S.,” Bygrave said. “We don’t have tennis in colleges so you either have to play and don’t go to school or go to school and don’t play.”

Bygrave’s dream became reality when she accepted an offer to become part of the 2015-16 recruiting class at Appalachian State. A recruiting class that was highly regarded, having received top 25 votes in various national recruiting polls.

After arriving in the U.S. for the first time last year, Bygrave had to sit out a season, which she said was tough, but it gave her a year to adjust to the culture in America.

“I think last year was better for me overall because I got my head around the U.S. a little bit before I started playing,” Bygrave said. “It helped me ease into it a little more.”

For Bygrave, coming to Boone was like entering a new world after growing up in a place with an average year round temperature of 85 degrees Fahrenheit with the motto “Beautiful one day, perfect the next.”

Bygrave said she didn’t expect some of the freezing temperatures that she experienced after she arrived in Boone.

“I like the weather in Queensland, and it is a lot warmer,” Bygrave said. “When I go back home in May, it is winter again, but it is still a lot warmer than Boone.”

Women’s tennis head coach Colin Crothers has been coaching for more than 18 years and looks at the 2015-16 class as one of his best ever. Crothers is especially excited about his acquisition from down under in Bygraves.

“She had a very good Australian ranking and she had some really nice tournaments right before she came over here,” Crothers said. “Australia is a good quality country in tennis.”

Crothers has recruited many foreign players through his time at App State but hasn’t had a player from Australia since 2010, when Olivia Stannard from Chittaway Point, Australia, was in her last season with the team.

“I am always happy to have an international player bring variety to the team,” Crothers said. “Taylor is a great doubles player and is in a tough spot at the No. 3 spot where she has done very well.”

The Mountaineers most recently have been the international home for Olivia Isbey from New Zealand and Ellie Linsell from England. Isbey played one season in 2014 and Linsell played from 2010 to 2013. Since 2008-09, App State has seen seven international players including Bygrave.

“She was very quiet when we met, but now she has become a lot more outgoing and we always chat with when we see each other on campus,” Webster said. “She is starting to find her place and has settled down a lot.”

Webster, an Australian standout, finished with a 36-0 record in singles and doubles throughout his career in Australia. Webster also won the Sun Belt Freshman of the Year award last season with an 18-4 record in singles matches to go along with a 12-7 record in doubles.

Webster is still finding his place in the U.S. as well, but has had the opportunity to play with two other Aussies at App State. Casey and Maddocks were already a part of the team at App State when Webster arrived. His brother, also an Australian tennis player, is on the team at Queens College in New York.

“It’s just comfortable knowing my brother has settled into America and helped me know I could live here,” Webster said.

Casey can relate to both Webster and Bygrave, recalling when he joined the team as the only Australian four years ago.

“When I came in, it was very surreal being around people from a different country and everything was a bit different,” Casey said.

When Maddocks joined the team in 2014, he paired up with Casey as a strong doubles team matchup that finished 12-6 last season and was named to the Sun Belt all-second team.

“Ollie showed me around and it was easy having someone to talk to and learn the ropes from,” Maddocks said.

Acceptance of America, and Boone specifically, is crucial to making the adjustment from Australia, according to Casey.

“You just have to be willing to accept that Boone is different compared to where you are from, and you have to have a willingness to learn,” Casey said. “I have learned so much since I have been here. You have to keep a positive frame of mind because it keeps getting better and better.”

For Bygrave, this season is more about performance rather than adjustment, having used her redshirt season to adjust to her new home. She has had the opportunity to learn from senior Mackenzie LaSure, competing in five doubles matches with her this season for a 3-2 record.

“She is playing a lot better just because she has been so open building her relationships with the team,” LaSure said. “It has been cool seeing her grow and I have loved playing with her.”

Joining a team thousands of miles from home can be hard to adjust and fully accept being part of a team. While LaSure is from the U.S., she knows how tough it can be to join a new team in college.

“Mackenzie knows a lot and has helped me with her experience,” Bygrave said. “She has told me how to hit certain shots and how to help the team. It has been easy to play with her.”

LaSure played with anothrer foreign player, Linsell, when she was a freshman in doubles, but now as the upperclassmen, has embraced her leadership role with hopes that Bygrave will do the same.

“I can definitely see her filling that leadership role and speaking up about what she believes in,” LaSure said. “It is amazing how much she has opened up and been able to adjust so quickly.”

Aside from getting to know her teammates, LaSure said there are still some fun laughs as Bygrave adjusts to the culture. “We will have group messages and there are plenty of times she gets confused about some of the things we say.”

Yet, Bygrave has some of her own laughs about some of the things in America.

“Ordering food is so difficult and there is a lot of cheese here,” Bygrave said. “You can get canned cheese.”

Bygrave’s younger sister, Sophie, is currently a rising tennis star in Australia and has told the Burnett Times in an interview that she wants to follow in Bygrave’s footsteps.

“When I am home I sit with her a lot and try to help her with technique, and my mom has helped her as a coach also,” Bygrave said.

Despite Australia being home to some of the biggest tennis tournaments in the world, the culture at App State continues to attract players from Australia to the mountains of North Carolina.

“I feel App State is one of the fastest expanding universities on the east coast,” Casey said. “The faculty and connections you make are great and it’s a nice part of the country.”

Continuing to represent Australia and learn the new culture of America, Bygrave has already made a strong impact at App State and will only continue to grow as a tennis player and person.

Bygrave has helped lead her team to a 4-8 overall record and holds a 6-4 doubles record and 1-3 singles record.

“I just want her to continue and have fun and embrace these four years,” LaSure said. “I don’t want her to be afraid of speaking her mind.”