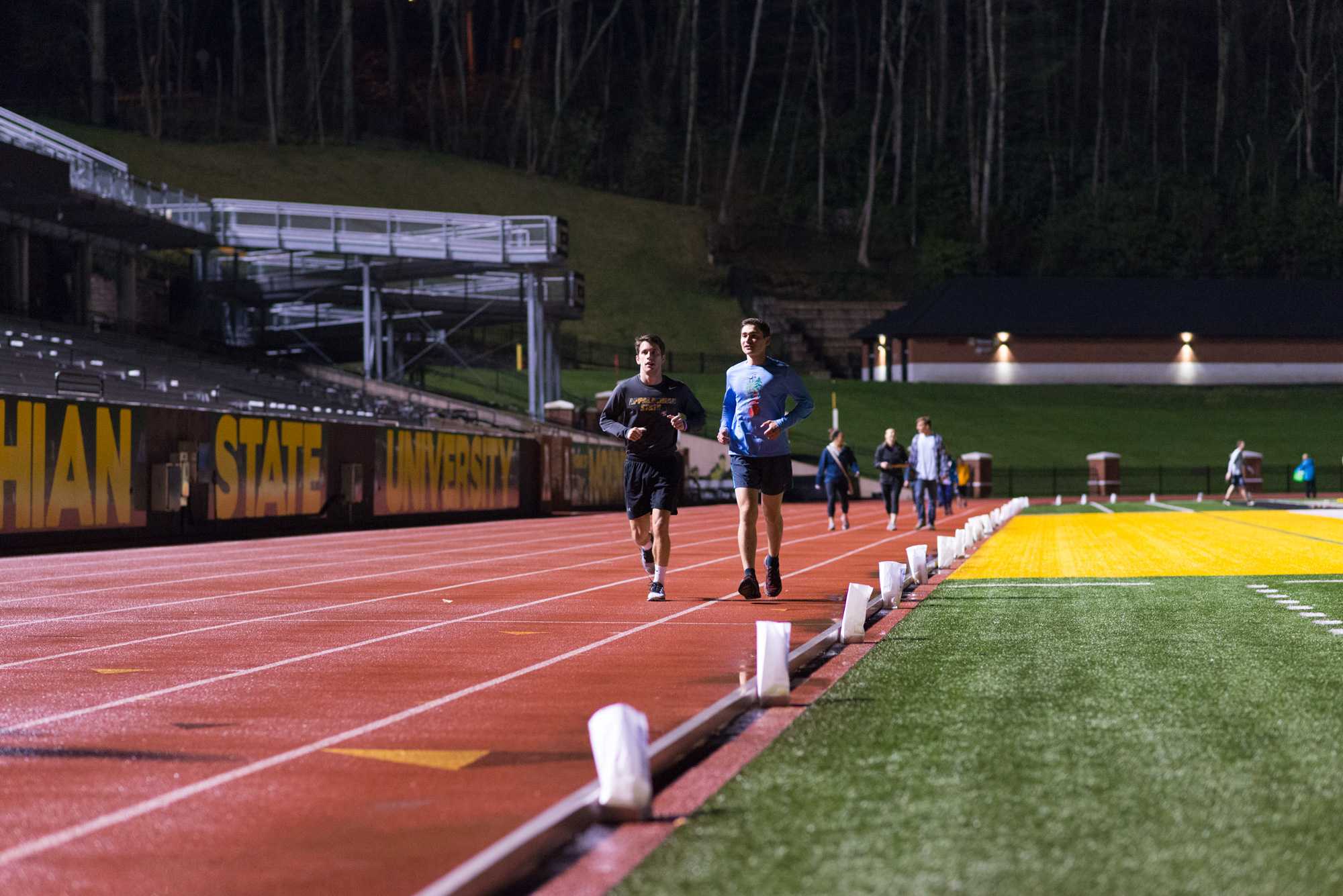 Participants of Relay for Life run or walk around the track Friday night at Kidd Brewer Stadium. The relay started at 6:00 p.m. on Friday and ended at 6:00 a.m. on Saturday. Photo by Dallas Linger.

The American Cancer Society Relay For Life took over Kidd Brewer Stadium for 12 hours last weekend, starting at 6 p.m. on Friday and ending at 6 a.m. on Saturday.

The event kicked off with a Survivors Lap, which consisted of cancer survivors in the community walking around the track carrying a sign reading “We Are Hope.”

Music played through the night as App students, community members and cancer survivors ran and walked around the track.

Volunteers worked in fundraising booths, representing different organizations contributing to the cause. Participants ate and socialized as they meandered through the stalls.

At 10 p.m. there was a luminaria ceremony consisting of participants walking a few laps around the track, which was surrounded by luminaria bags. Each of the bags represented a cancer patient.

“It really reminds everyone of why they’re at the event,” Angel Mathis, one of the relay planners, said. “To take a stand against cancer.”

Everyone remained silent throughout the ceremony out of respect and remembrance for those who have passed away.

“It was truly touching,” Maura Schaffer said. Schaffer is the president of Colleges Against Cancer, the service club that makes Relay For Life at Appalachian possible by planning and executing the event.

Most Appalachian students know someone who has been affected by cancer, so many of the volunteers and participants are there in honor or in memoriam of someone.

“I’m not just here because I have to be here for service hours,” Will Hackley, freshman business major, said. “My mom and grandma both had melanoma.”

Funds are raised both before and during the event.

Thanks to sponsors and early donations, this year’s fundraising goal, $30,000, was met before the event even began.

Money is raised during the event by participants who get a set amount of money from a sponsor for each lap they walk. Some participants pay a fee to run in relays on the field.

Each organization and club chooses how they want to fundraise at their booths. some offered games, some sold products or food and some offered services like the $1 photo booth.

“It’s important for people to participate in something bigger than themselves, that impacts the community in a positive way,” Anderson Clayton, a freshman journalism major and event volunteer, said.

Because cancer survivors in the Boone community, like 6-year-old Aiden Amason, participate in Relay for Life, App students have the opportunity to see and connect with the people they’re helping.

The American Cancer Society is the nonprofit voluntary health organization that holds Relay For Life events. Over 6,000 of these events happen each year, all over the U.S. and in other countries.

Relay For Life has been happening at Appalachian since 2001, consistently drawing a big crowd. The final tally isn’t in yet, but there were between 1,000 and 1,500 people at Relay For Life this year.

“I am extremely proud of the entire community,” Mathis said.