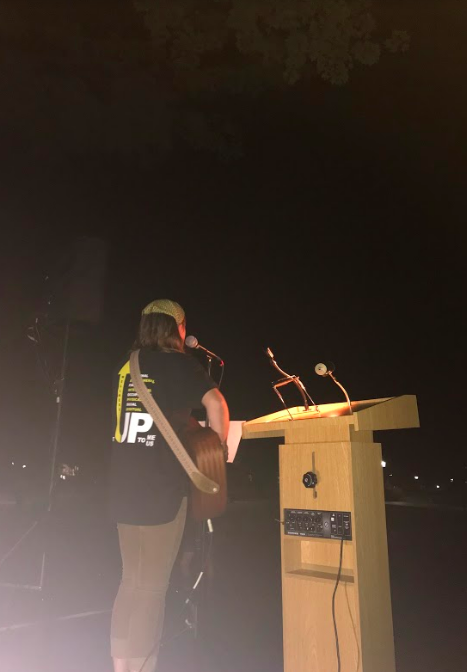 Sophomore creative writing major Mac Utter sings to the crowd during the 29th Annual Walk for Awareness. The event was held in memory of Jeni Gray, Leigh Cooper Wallace, and others affected by violence.

“Each and every one of you has the power to make a difference,” Barbara Daye, founder of the walk, said.

Daye began the walk 29 years ago when she worked in the Dean’s Office at App State. During Daye’s employment, two women from App State were abducted and raped by the same attacker.

Daye knew Gray, who was a writer for App State’s news bureau and reporter for the Watauga Democrat, and Wallace, a member of App State’s varsity track and field team and later a coach in the Boone community.

Before students embarked on their march to Sanford Mall from the Schaefer Center for the Performing Arts, Cooper said Wallace credited Gray with saving her life. If Gray had not been abducted 5 days earlier, Wallace might not have reacted so quickly to the danger she was in.

Wayne Clawson, App State alumni and former vice chancellor, said that it is appreciable App State does the walk every year. Clawson also wrote “Jake’s Mountain Road,” which discusses the story behind the Walk for Awareness, including the trial of attacker Daniel Lee.

Wallace passed away from pneumonia in 2012, but spoke numerous times at App State’s annual walk, remembering Gray and standing against violence.

“Violence is such a huge issue right now,” Mac Utter, sophomore creative writing major, said. “I think with any movement like this it unites people and people that feel alone, whether they have been affected by the issue or in general, it gives them a sense of unity and comfort.”

Utter played “Bridge Over Troubled Water” by Elvis Presley at the end of the walk.

Martha McCaughey, sociology professor at App State and the director of First Year Seminar, was the night’s keynote speaker. McCaughey noted how this year’s common reading book “The Laramie Project” is closely tied to the violence App State experienced that week in 1989.

“We must remember Jeni Gray, Matthew Shepard, and so, so, so many others whose lives have been shattered or cut short by interpersonal violence,” McCaughey said. “We vow to pursue our highest purpose at Appalachian in protecting (the) university communities ultimate objective.”

McCaughey encouraged students to recognize their duties as members of a community and how to change it for the better.

Student leaders took to the stage after McCaughey, expressing why they walk for awareness.

“Be loud and stand with me,” Dejon Milbourne, senior and SGA president, said. “Walk with me as we stand against violence on our campus.”

Matt Raynor, senior hospitality and tourism major at App, expressed his support for the LGBT community, mentioning this year’s common reading “The Laramie Project,” a story that tells of Shepard’s tragic death because of his sexuality as a university student.

“As a queer community member, I know that these acts of assault can scar someone forever,” Raynor said. “I walk in support of the trans people of color who are assaulted at a disproportionately higher rate in comparison to their non-queer peers.”

After student leadership ended their thoughts on violence, April Baer, the Title IX coordinator for App State, closed out the night of remembrance and reflection.

“I want to make sure that everyone is aware of the key message, that we are all stronger than we think, but as one Appalachian, we are stronger together,” Baer said.

Featured photo caption: Sophomore creative writing major Mac Utter sings to the crowd during the 29th Annual Walk for Awareness. The event was held in memory of Jeni Gray, Leigh Cooper Wallace, and others affected by violence.