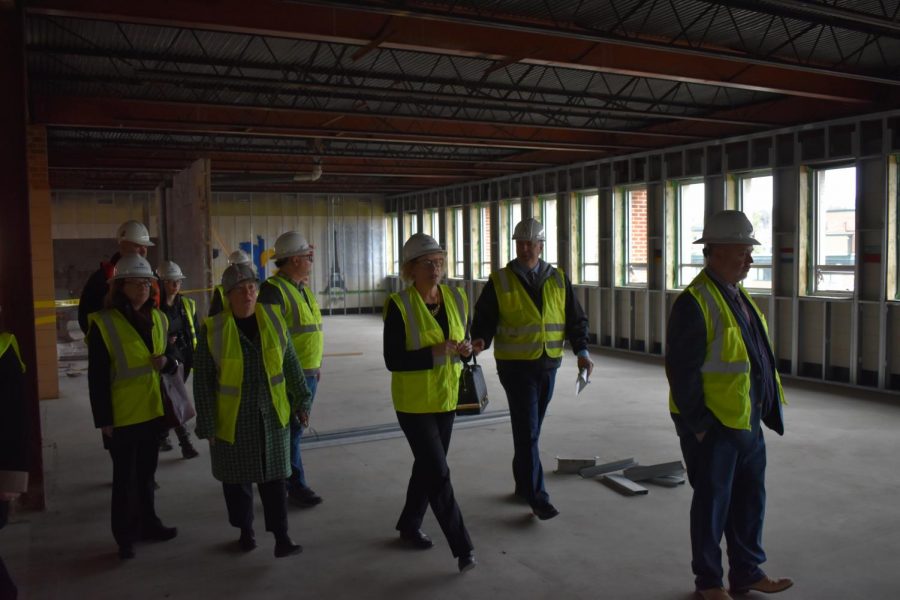 University officials make their way through Sanford Hall as it currently stands on Feb. 19. Nick Katers, associate vice chancellor for facilities management, said that the building already had a good structure and base and that "there was a lot of benefit to renewing this building rather than tearing it down and starting over.”

On Feb. 19, Nick Katers, associate vice chancellor for facilities management, took university officials on a tour of Sanford Hall to bring them up to speed on where the project is in its development, and what can be expected when construction is completed.

“The Sanford Hall renovation is an $18 million project to take a 1960s-era building and put another 25-40 years of life into it,” Katers said. “It’s a holistic renovation of all floors to include a complete redesign of office spaces and classrooms, all-new utilities and all upgraded HVAC and other systems inside the building.”

Student fees funded the project, meaning students are supporting the revamping of the building. Katers says Sanford Hall is an important building for App State, and all students are likely to find themselves in the building at some point.

“Most freshmen and sophomores take at least one class in Sanford Hall, so it’s one of the anchor-point buildings for the university and widely used,” Katers said. “I don’t think there are too many students that go four years without having at least one class here.”

The construction, which began in July, is now in the framing stage. The layout of classrooms and office spaces are now visible from inside the building.

“We have another couple of months of framing to do, and then we’ll start putting in conduit, electrical, automation, a new HVAC system and starting to push drywall in,” Katers said.

For those walking by, the new elevator system will be the most obvious improvement to the outside. There will be two elevators, which is one more than the building had.

“The old elevator had frequent maintenance issues, so I think this will make everyone a lot happier being able to get in and out of the building a lot faster,” Katers said.

The classrooms will be ready for use by spring 2021, and faculty will move into the office spaces shortly after.