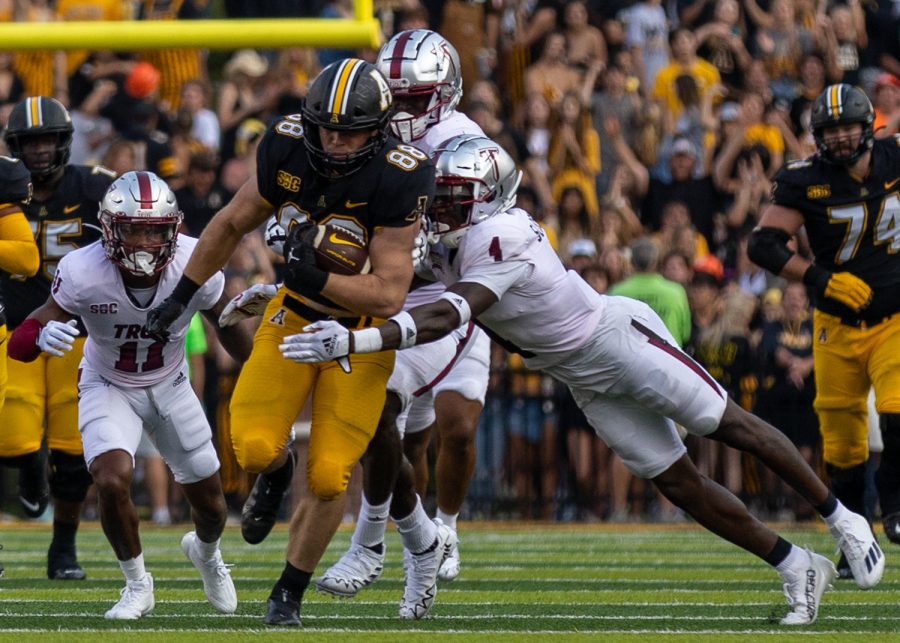 Boone welcomed ESPN’s College GameDay for the first time Saturday, drawing in national media attention and crowding Sanford Mall with thousands of fans. Not only did the small college town put on a great show, it exceeded the standard set by larger schools that host College GameDay more frequently.

“That was one of the most memorable shows I’ve ever done,” said College GameDay host Rece Davis following Saturday’s three-hour filming.

Boone is also special for its loyalty and love for its own. That’s always been evidenced by the support given to the football team, but when former App State student and country music star Luke Combs returned home to appear as the guest picker on GameDay, Sanford Mall reached its peak volume and cheered louder for Combs than any of the sports celebrities on the GameDay set.

With two seconds left and 53 yards separating the Mountaineers and a game-winning touchdown, hope seemed to be all but snuffed out in Kidd Brewer Stadium. In fact, many fans headed for their cars ahead of the fourth down Hail Mary attempt.

As they hiked down Stadium Drive en route to their vehicles, The Rock erupted and fireworks shot out above the stadium. They missed one of the greatest finishes in App State football history.

Similarly, in the season opener vs. North Carolina, App State trailed by eight when it took the field with 19 seconds remaining. This time, the Mountaineers needed just two plays to march into the end zone and have an opportunity at a game-tying two-point conversion.

If there’s anything to know about this year’s App State team, it’s that you can never rule them out, no matter how dire the circumstance.

3. The offense is highly capable, but often inconsistent

The Mountaineer offense constantly shows flashes of greatness, marching down the field and scoring with ease at times. Their opening drives of both halves against Troy and the entire 40-point fourth quarter against North Carolina displayed just how potent the offense can be.

On the flip side, the Mountaineers were held scoreless through the middle two quarters against the Tar Heels, and came up empty on nine of 17 drives against No. 6 Texas A&M and Troy.

Still, they have just five three-and-outs through three games against highly-talented defenses.

Hundreds of App State students camped out on Sanford Mall Friday night in anticipation of College GameDay the next morning. Only, the camping aspect turned out to be unrealistic as it more so turned into a massive fraternity party. Music blared and games were played throughout the night, and a line to enter the GameDay pit began to form at 1:50 a.m. Instead of sleeping, students were standing all night long, and those students kept standing through the 9 a.m. – noon taping of GameDay.

After GameDay, many students left Sanford for various tailgates across campus, finding little to no rest before the 3:30 p.m. kickoff between App State and Troy. By the time they filled the stands in Kidd Brewer Stadium, many students had well exceeded 24 consecutive hours awake. Still, they packed The Rock, cheered loud for the Mountaineers and helped post the fourth largest attendance mark in Kidd Brewer Stadium.

“That was, to me, one of the best atmospheres,” head coach Shawn Clark said. “I mean, you have the best of the best here in Boone, North Carolina.”

The first three weeks of the 2022 App State football season have been historic. Two of the top four attendance records in Kidd Brewer Stadium, two of the wilder finishes in the program’s history and a victory over the No. 6 team in the country; this time in Mountaineer football will be remembered forever in the High Country.

While it’s easy to get wrapped up in the insanity that has been the opening to this season, the bottom line for Clark and his team is that they are 1-0 in conference play, and all of their goals are still ahead of them.

“Our goal is to win the Sun Belt Championship, and all of our goals are in front of us,” Clark said.

It may have taken a last second Hail Mary to get there, but App State sits in the Sun Belt drivers seat at 1-0.