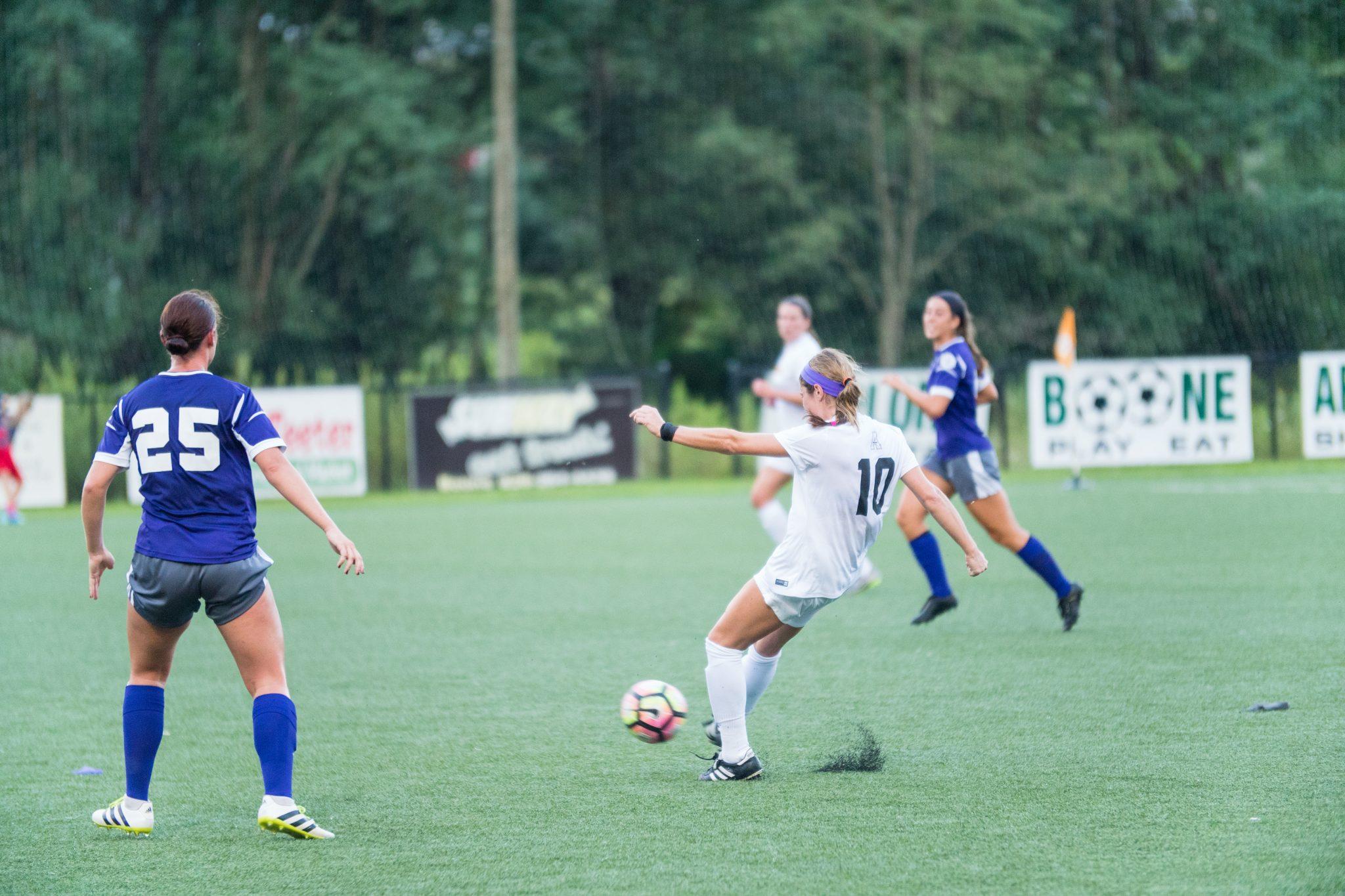 Coming through in big game moments defines the tenacity and skills an athlete attains. Gaining the respect from coaches and teammates, along with not being afraid to hold yourself accountable, defines the leadership qualities one earns.

App State women’s soccer senior and co-team captain Jane Cline went from an offensive threat on the ball as a freshman to a leader on the team. She proved her big game tactics in last season’s Sun Belt conference tournament, and became an all-around player, working her way up in the record books while defining herself as a true team leader.

Now as the face of the team, Cline, who led the Mountaineers in points last season, is ready to help guide a strong team to their first Sun Belt championship.

“I think some leaders are afraid to say the words ‘winning,’ ‘championships’ and ‘scoring goals,’” head coach Sarah Strickland said. “Jane is not afraid to say those things because she is willing to put the team on her back, run down balls, get assists and grind things out that others sometimes are afraid to do.”

Cline committed to App State as a freshman in 2013 and immediately showed her offensive strengths, appearing in 18 games with 10 starts and finishing her freshman campaign with five assists, 13 points and 22 shots en route to being named to the SoCon all-freshman team.

“She was just an offensive threat,” Strickland said. “If the ball was near her, she would be dangerous.”

After increasing her play and stats her sophomore year, Cline had her breakout season in 2015 as a junior. Leading the team in career high points (19), goals (8), shots (54) and shots on goal (32). Her eight goals were tied for sixth in App State women’s soccer history and placed herself eighth all time in career goals with 16.

She has taken notice that she is inching up in the programs records but it isn’t a priority of hers.

“It’s in the back of my head but at the same time the reason I like to score is for our team and I like our team to win,” Cline said. “If me scoring goals means getting our team to the conference championship then that’s what I am here for.”

Not only did Cline break out offensively and defensively last year, she helped guide the Mountaineers to the Sun Belt conference tournament semifinals in only their second year in the league.

Named one of three co-captains this season with junior defender Lindsey Tully and senior defender Carrie Taylor, Cline says they all have different opinions and personalities which help the team look up to diverse leaders.

“Jane is a very strong leader and very vocal,” Tully said. “She leads by example and is someone we can constantly rely on and we know she can score goals.”

Strickland defines Cline as a leader that is not afraid to speak up and hold her and the team accountable even when the team may not always want to hear it, but needs to.

“She is the grit leader who wants you to dig down and not always inspire you the way you may want based on accountability, but she will always be like ‘let’s go,’” Strickland said. “And that’s just Jane.”

But for Cline, the pressure is just part of the fun.

One of the keys to helping those young players is listening.

“Not only is she good at being vocal and stepping up, but she is also good at listening to us,” junior midfielder Kelly Flanders said. “If we have something to say, she is willing to take our input and help us as a team.”

Arguably having one of the healthiest teams since she has been a Mountaineer, Cline has one goal and one goal only: win the Sun Belt and get a ring.

“We are really focused on doing well in the season so we can get a good ranking for the tournament, but if we can win a ring, that would be the best thing ever,” Cline said. “I have thought about all the players before who haven’t won a championship and if we can win one for anyone that has played for this program, then that would be awesome.”

With the season starting at home Aug. 19 against Northern Kentucky, Cline looks to cherish her final season, but most importantly be the key leader and contributor the Mountaineers can look up to.

“She does a great job leading by example on the field and if you put her on for 45 minutes, she will give you 45 minutes,” Tully said.