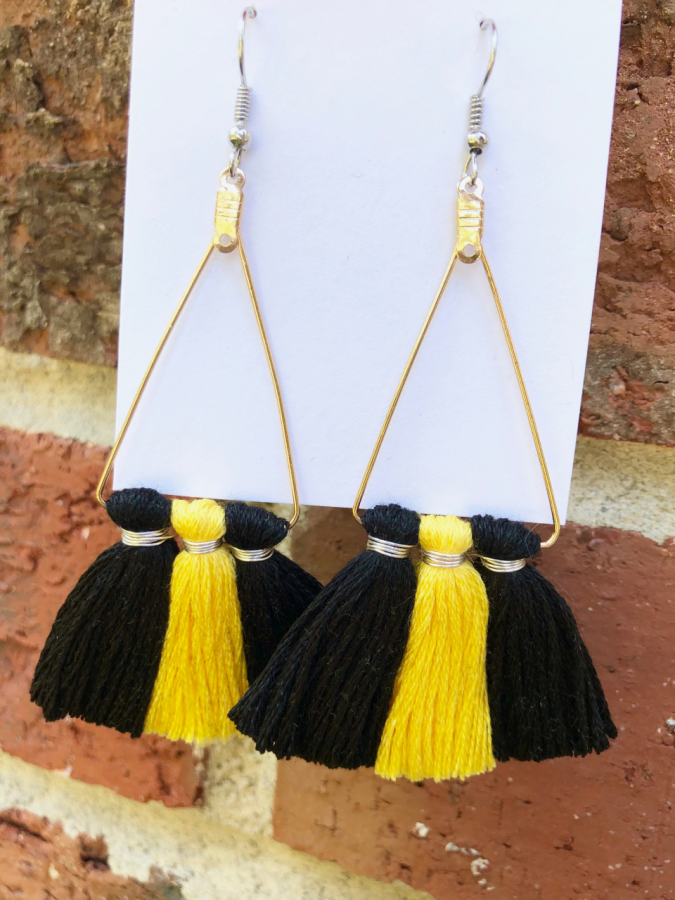 WINSTON-SALEM, N.C. — What started as a hobby on Instagram one summer, AnnaBanana Jewelry has become a functioning e-commerce shop selling earrings, necklaces, bracelets, scrunchies and more for a largely collegiate clientele.

Created by Anna Jordan, a rising junior at UNC-Chapel Hill, the shop features mostly “trendy” styles and has personalized jewelry for multiple colleges, including App State.

“I try to make a whole bunch of stuff based on college colors because incoming freshmen or transfer students would like them for football season,” Jordan said. “When I have looked for jewelry for colleges, I know they are usually pretty expensive, so I try to make them at fair prices.”

All of AnnaBanana’s jewelry and products range from around $5 to $10 plus a shipping and e-commerce tax.

Bateski has “well over ten” pieces of AnnaBanana jewelry, including some UNC-themed pieces.

“It’s gotten more and more popular these days to wear cute jewelry for football games,” Bateski said. “You may not even want to dress up as much for basketball games, but it’s easy to throw on a pair of earrings and it not be that dressy.”

AnnaBanana is one of the reasons Jordan became a business administration major at UNC. Without AnnaBanana to show that she was motivated, she may not have gotten into the Kenan-Flagler Business School, Jordan said.

“Having started AnnaBanana gave me a lot to talk about for the application to the school, and I think it really helped out,” Jordan said.

Through her major, Jordan has worked with multiple organizations to create connections in the community including Carolina Women in Business and Changing Health, Attitudes and Actions to Recreate Girls.

At this spring’s fundraiser, Jordan was one of two student vendors. She sold around $600 worth of AnnaBanana jewelry, and donated over $300 to the fundraiser. In total, the event raised around $2,000, Murray said.

“Anna’s pieces were our best selling out of the student vendors,” Murray said. “We had to ask her multiple times to make more because there was such high demand for it. She contributed a lot to how successful and profitable the whole fundraiser was.”

Events like these are the highlight of running AnnaBanana, Jordan said. Not only does it give community exposure, but it’s also rewarding to raise money for organizations, she said.

She often sees her jewelry around UNC’s campus after fundraisers.

“I’ve had random people come up to me at school and say, ‘Oh, are you Anna Banana?’ Which is fun to be known as that,” she said.

Getting AnnaBanana to where it is now was not an easy process, Jordan said. The store has changed internet platforms two times.

The products were originally sold on Instagram in 2018, but were moved to a new website that didn’t have the capacity for orders and sales later that year, Jordan said.

“As I started getting more orders, I wanted to make it more professional and have my own website,” Jordan said. “When the first website I created was pretty successful, but I wanted to move on to making an actual online store.”

Jordan now uses a website that she pays a small fee to use, she said. Jordan has plans to register the website as a small business through North Carolina now that the COVID-19 pandemic canceled many of her summer plans, including studying abroad.

“It’s given me a lot of time to work on the business,” Jordan said. “I’ve had more time to make more products and put them up online, which has given me a lot more sales recently compared to when I’m more busy with school.”

Jordan encourages anyone who may be interested in starting a small business to try it out. The experience of running AnnaBanana has given Jordan a lot of experience and inspiration for her future by doing something she loves, Jordan said.

“Starting small, you don’t have a lot to lose,” Jordan said.