“A level 10 desire to cook meat over fire:” Local chef pursues his own food truck 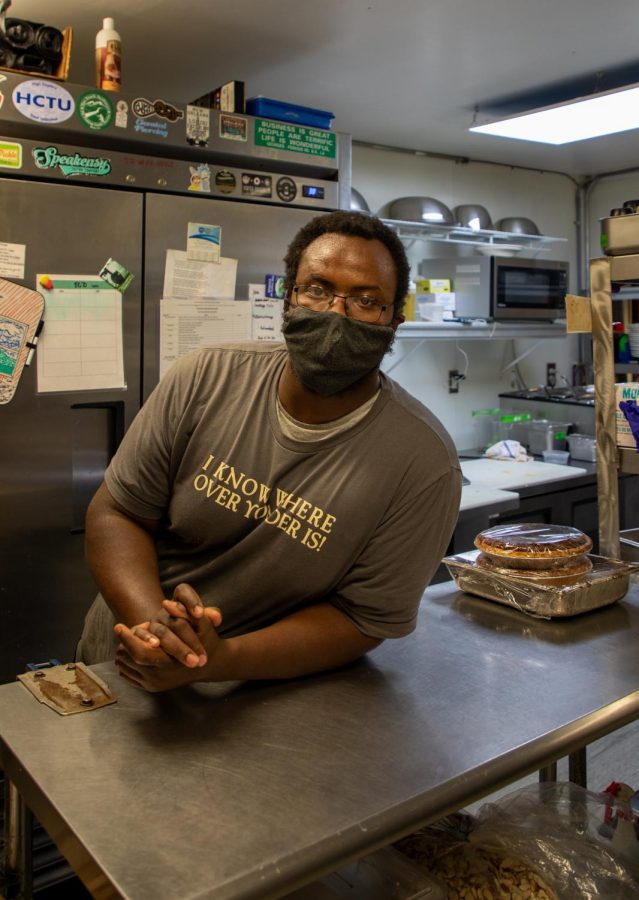 Ambrose has the hopes of one day opening his own food truck.

Cold wind and sputtering rain slashed the mountainside throughout the night as a local chef fought to maintain three wood fires over the course of his 10-hour brisket smoke.

Ambrose Young, began smoking the brisket at approximately 11 p.m. the night before his pop-up barbecue showcase. Young is a Boone local and works as a chef in multiple restaurants in the High Country.

Over Yonder, a southern restaurant and market in Valle Crucis, hosted the pop-up event. When owner and chef at Over Yonder, Andy Long, arrived at the restaurant the next morning around 9 a.m., Young was pulling the tender briskets out of the smokers.

Long and Young put on the pop-up event to get the word out about Young’s hope to open his own all-wood barbecue food truck sometime in 2021 and give him the opportunity to hone his skill.

“This past week was the second time I’ve ever actually cooked brisket,” Young said. “The very first brisket I ever did came out perfect. This round of it showed me, ‘OK, I see where I could have done better or something I could have done differently.’”

Barbecue — brisket specifically — is more about technique than recipe or rub, Young and Long both said. The key to a proper brisket is consistent temperature.

“Low and slow,” Long said, which is even more difficult when you are cooking with fire instead of gas.

Unable to get his hands on a large commercial smoker, which is typically optimized to maintain a consistent temperature, Young had to use three smaller, borrowed smokers for his event, adding to the challenge.

Young wants to bring all-wood barbecue to the High Country because of the bigger flavor and more natural taste, even though he knows it is a much more difficult task.

Cooking with wood has a profound difference on the food, Young said. Wood is able to not only “pack more flavor” but also avoids the gas taste in the product.

In 2014, Young graduated from App State with a degree in English creative writing, but decided not to pursue that field any further.

“I had a few opportunities where I could have left the mountain with some serious writing, but the neighborhood they would take me to was not a place I wanted to go,” Young said.

After graduating, Young quickly started working in restaurants because it was easy to get into, he said.

“Then I actually got to meet some chefs and start working with them, and it was like, ‘man, this is rekindling the passion I had as a kid,’” he said.

Young and his sister, Shandel Harris, were raised mostly by their grandmother, Harris said.

After their grandmother got sick, Harris said she took over caring for herself and Young.

“A lot of times, he had to, you know, pretty much learn to fend for himself,” Harris said. “Our grandmother … She would be our inspiration for cooking. We had our own garden, we raised animals, so cooking has always been a daily part of life.”

Harris and Young’s grandmother also taught them many things in the kitchen, but eventually, they branched out to “self-taught experiments,” she said.

Harris said she was surprised when Young decided to pursue a career as a chef and restaurant owner, but now that he is working to open his own restaurant, she thinks he will be very successful because of his passion for flavor and desire to make people happy.

“He doesn’t meet a stranger,” Harris said. “He really cares about what people want and how their food is.”

Working at both Over Yonder and Vidalia in Boone has shown Young how much he prefers to work in small kitchen restaurants, he said.

“I’ve worked in some places that will definitely kill your passion because they are so corporate,” Young said. “They are more strict on what you can and can’t do.”

Young said it’s easier to learn and improve your skills in smaller restaurants where there is more freedom to be creative.

Long said Young will be successful because of his constant desire to learn and newfound obsession with barbecue that afflicts many chefs.

“There’s a lot of cooks that are fascinated with barbecue,” Long said. “It’s kind of a bug. Once cooks get into barbecue, it’s really hard to think about anything else.”

Long said Young has a “level-10 desire to cook meat over fire and develop that into a business.”

Over Yonder opened for the take-out-only event at noon on Oct. 30 and provided all-wood barbecue lunches to nearly 100 hungry customers.

Young hopes to have more pop-up showcases at Over Yonder in the coming months to build momentum as he works to open his barbecue food truck.