A new kind of theater: Department of Theatre and Dance debut “The COVID Chronicles” 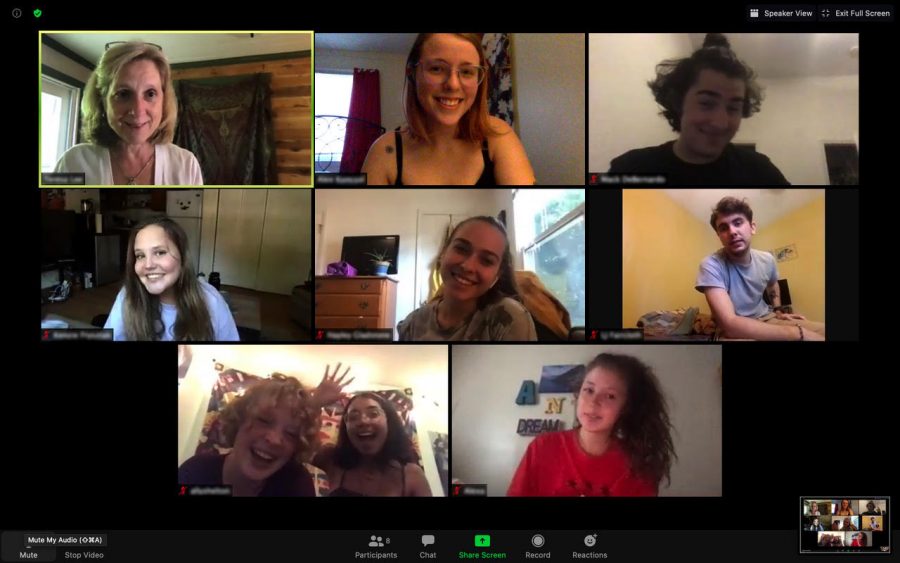 Courtesy of the Department of Theatre and Dance

Production members of "The COVID Chronicles" pose on Zoom. The production will feature four acts of original monologues written and performed over Zoom by App State students.

Watching theater through a Zoom screen is not a normal way to see a performance, but App State’s Department of Theatre and Dance is bringing Boone a Zoom meeting unlike any other.

This fall, the department will begin its season with “The COVID Chronicles: Monologues Created During the Pandemic.”

The production, spanning from Sept. 18 to Oct. 23, will feature four acts of original monologues written and performed over Zoom by App State students.

The New York production “The Line” inspired the creators of “The COVID Chronicles” to make an original production.

According to theater professor Derek Davidson, the department sent out a call for student-written monologues last semester and was overwhelmed by the response, with some students submitting up to five monologues.

“It’s really just a testament to the students here. I just love the ASU students, they’re great,” Davidson said. “It’s just so cool to see, we give them this opportunity, and they always, always rise up to the occasion here.”

Although students all wrote the monologues during their time at home during the pandemic, they feature a diverse range of topics.

“My monologue is given from the perspective of a Miami spring breaker, and other monologues are given in the perspective of themselves or the character they thought up so it doesn’t have to be specifically about COVID, but these were just written during COVID,” actor Mack DeBernardo said.

“I love that this is inimitably uniquely our students’ work,” Davidson said. “They’ve written it, they’re performing it, and in some occasions, they’ve even directed it. Each of the acts will be very different, and I’m excited to see what those differences will be.”

Cielo Gomez, a junior theatre performance major who will be performing in acts one and two, says the performances will be a chance for people to connect with others again through theater.

“I feel like it’s more intimate because I’m right in front of the camera, and everybody that comes and watches the show is going to be right there, really up close and personal,” Gomez said. “It’s also cool that we’re doing monologues from people, from our own peers that wrote them. I think that’s also very intimate and needed at a time like this.”

According to DeBernardo, the performance is not the only part of the production that is over Zoom.

“Theater is a very community-driven thing, and so we meet as a group on Zoom occasionally, but our rehearsal process looks very different from what a normal rehearsal process would look like at Appalachian State,” Debernardo said. “Specifically, that we have one-on-ones as a majority of our rehearsal period instead of coming together for two to four hours a night to rehearse these monologues.”

Gomez looks forward to bringing theater back to Boone after a long period without it.

“I guess a positive is that we’re able to share art still during this time when theaters are closed everywhere else,” Gomez said. “We found a way to use the technology that we have and be innovative in order to still share art and theater with everyone.”

“The COVID Chronicles” is free of charge to the public, and spectators can access the performance through the department’s web page 15 minutes before the 7 p.m. showings on Oct. 2, Oct. 16 and Oct. 23.