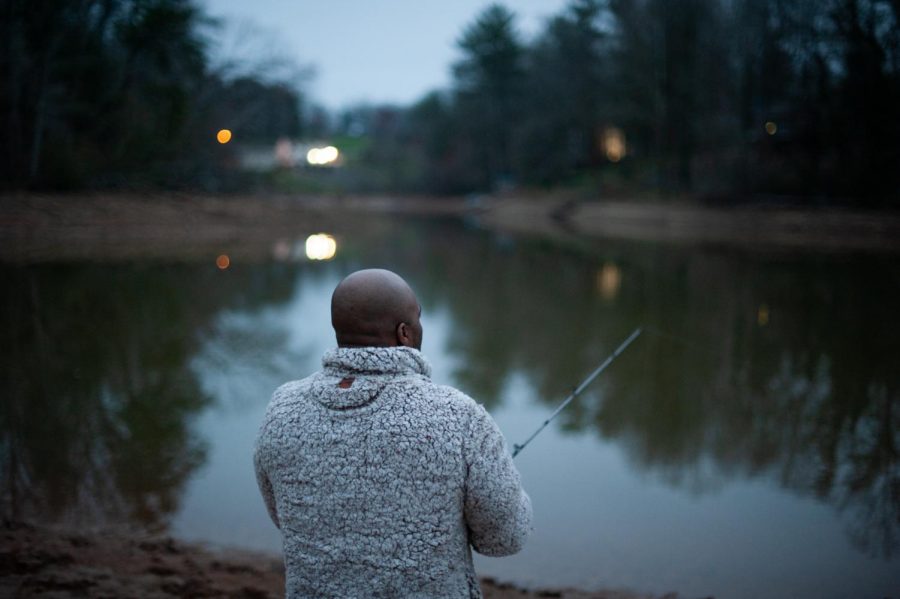 James Murdock of Granite Falls fishes as the sun sets in Caldwell County. “I’m not gonna let anything stop me from fishing. I love to fish,” he said.

James Murdock cast his fishing line into the water as the sun set behind the clouds in Caldwell County, standing on the muddy banks of Old Millpond with his son.

Murdock said he’s not going to let fear over the coronavirus consume him, as he has seen in the news, like fighting over toilet paper in stores.

Murdock, of Granite Falls, a rural town of 4,600 people, had yet to catch a fish during his fishing session.

“Usually I catch a bass, but not today,” Murdock said.

The end of his fishing pole began to bend as he had a bite. “It’s just a baby.”

Murdock said it’s starting to become fishing season because of the warmer weather.

“I’m not gonna let anything stop me from fishing. I love to fish,” Murdock said.

On April 3, The New York Times journalist Alexander Burns, spoke with Michael Barbaro, host of the NYT podcast “The Daily,” about the partisan differences between red and blue states in response to the virus.

Burns said that without clear guidance from the White House, more rural and Republican states have been reluctant to react with aggressive measures like mandated social distancing to slow the spread of the virus.

“In much of the country, I think even to this day, there’s still the perception that the coronavirus is an urban problem,” Burns said.

Across the Millpond Bridge and into the center of Granite Falls, a group of men in athletic clothing gathered outside the PC Paramedix storefront.

The men were part of F3 Nation, a men’s workout group that seeks to create “the invigoration of male community leadership,” according to its website. “F3” stands for fitness, fellowship and faith.

Under the light of street lamps, the men set up two U.S. flags to distinguish the “Area of Operations” or “AO” as the group called it.

Despite the evolving news of the COVID-19 pandemic and recommendations to practice social distancing, the men still gathered for a group workout.

“Most of the F3 groups across the nation are canceled,” Ben Johnston, a member of the local F3 chapter said. In response to the growing pandemic, F3 Nation posted a letter to their website stating, “Men, THIS is the kind of thing that we were made for … we will get through this just fine.”

F3 Nation group workouts in the Hickory region postponed workouts and meetings March 17, and are meeting virtually until further notice.

This men’s group relies heavily on group meetups to build leadership and fitness through camaraderie. In a statement to F3 Nation chapters on March 25 on their website, the leadership said that “F3 doesn’t close” calling what F3 stands for a movement and set of shared ideas more than an institution or place that can be closed down.

Johnston said “people should go outside and do some burpees, push-ups, squats, lunges and run a little” to stay active at home during social distancing and isolation.

Most of the confirmed cases in North Carolina are in Mecklenburg and Wake counties, 830 and 363 cases respectively on April 8. The only visible signs of a pandemic in rural towns like Granite Falls are the elimination of restaurant dine-in services and school closures. Some residents even question the severity of this outbreak.

In The Daily episode, Burns and Barbaro discussed how rural areas that are more socially distant in geographical and infrastructural design are hesitant to react to safety measures like limiting travel to essential trips only that may be happening in a more urban setting. Governors with a large support base in rural areas are looking to their constituents who may see what is happening in major urban areas as irrelevant to their livelihoods.

Mckensey Coffey asked her coworkers, “Are you afraid of the coronavirus?”

Each responded with a resounding, “No.”

The perception of severity over the pandemic is low in their answers, giving a smile and laugh at the question. An employee working the grill said people need to be sharing more positivity to fight against the spread of the virus.

Coffey works the register of City BBQ, a diner on the main street of Granite Falls, which is known as the place “where good friends meet to eat,” according to its Facebook description. But, on March 20, the only sound came from the grill frying up hamburgers for curbside pickup.

The band Buffalo Country was playing outside the front door as part of a “social distancing” concert for those who came out to eat barbeque.

As Tim Hall and Buffalo Country, a self proclaimed “real country” band, performed a set, a family of three sat in front of their vehicle to enjoy the show. Coffey said she told the family to eat in their car in accordance with the governor’s executive orders.

Coffey told customers that to enjoy the show, they have to eat in their cars.

“It’s a misdemeanor to City BBQ if anyone is caught standing outside their car eating,”  Coffey said.