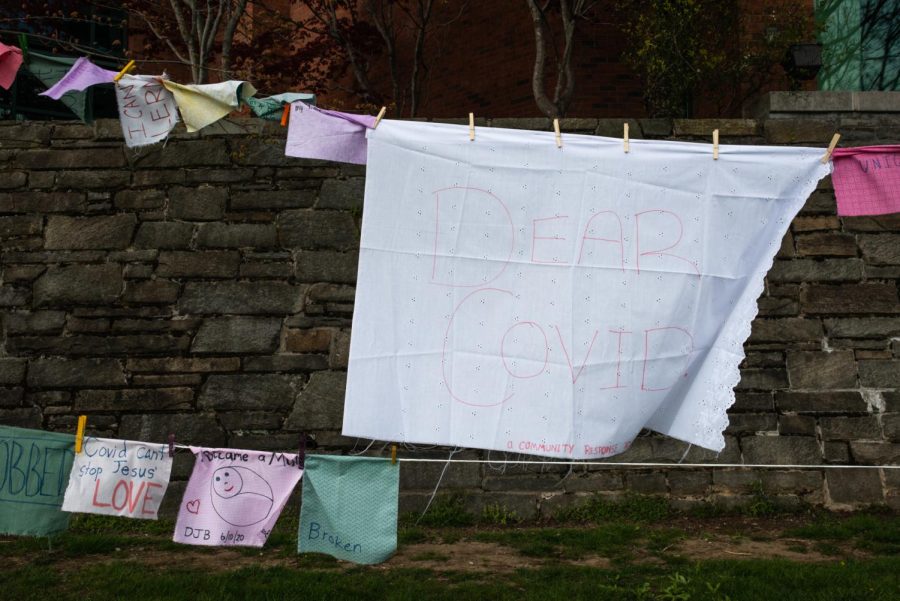 Students shared their COVID-19 experience on a display on Sanford Mall throughout April and May.

Change defined the spirit of 2021 from the very first days of the year, with an unprecedented attack on the heart of American democracy and its repercussions, and the inauguration of a new president. Politics stayed on the forefront of life in Boone, as students engaged in town council elections, in protests, and with all levels of government, resulting in the introduction of anti-discrimination ordinances and the banning of anti-homeless architecture. Student-led organizations continued to work toward their goals, as Black at App State tracked progress toward their goals for the university administration, and ClimACT sparked conversations about environmental and social issues in Boone.

A year into a pandemic, the university and Boone community  moved forward in exploring what life could look like six feet apart from one another. App State offered the first on-campus vaccination clinics in March, AppalCart transported patients to and from vaccine appointments, and the Hunger Health Coalition delivered supplies to those in need after the pandemic intensified food insecurity. The administration continued to “build the plane as we fly it,” according to Margaret McCoy, executive director of university events, as graduating students returned to the Holmes Convocation Center for socially distanced, masked and sanitized commencement ceremonies.

Tragedy forged stronger bonds in the community, as the lives of loved ones, family members and public servants were remembered. Chancellor Sheri Everts described her predecessor, John E. Thomas, who passed away at 90 in September, as the embodiment of a Mountaineer. Community member Lindsey Taylor described her daughter as the “number one joy” of her husband Johnny Bunton, an 18-year university employee who died due to COVID-19 complications. Law enforcement officers from across the state traveled to Boone to memorialize K-9 Deputy Logan Fox and Sgt. Chris Ward, who were killed in a standoff in April.

Though  moments of tragedy affected our community, the moments of joy and success, big and small, helped us move back toward normalcy — the return of live concerts, crowds rushing the field at Kidd Brewer Stadium for the upset over a top 15 ranked football program, and the return of one of App State’s best known alumni after an 18-month delay. Students searched for Squishmallows and rode a double-decker bus across Boone. A local bookstore found itself in the national spotlight after a Stephen Colbert feature on Super Bowl Sunday. After paying for studio use for the first time ever, student Dylan Innes released his first album with help from Avett Brothers producer Doug Williams, and artists founded a new studio to hone their craft.

The changes that occurred throughout 2021 impacted us all in unique ways. Moving forward into the new year, these changes should not just be left behind. Learning from them, embracing them, will help prepare us as we continue to adapt to the world around us. In order to move forward, we must also take time to look back and embrace the change.