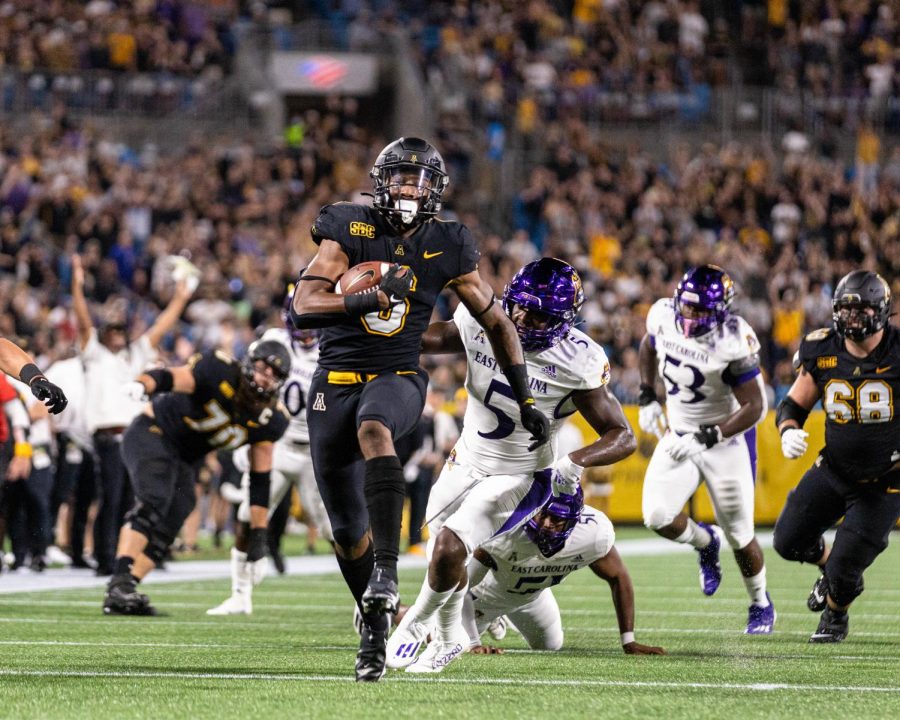 Junior running back Cam Peoples sprints to the end zone, scoring his first of two touchdowns on the day. The 6-2 back posted 100 rushing yards on 14 attempts while splitting the backfield with sophomore Nate Noel, who accumulated 126 yards on 15 rushes.

After a year of empty stadiums and half-capacity crowds, App State opened up the 2021 season in front of 36,752 rowdy fans in Bank of America Stadium as the Mountaineers thumped ECU 33-19.

“Just seeing the supporters back in the stands, it was like a different type of energy,” senior linebacker D’Marco Jackson said. “We were up, and we were just taking it all in, looking behind us. It was a memory I’ll cherish for the rest of my life.”

Both teams opened the game rusty on offense as the in-state foes traded three-and-outs on their first possessions. The Pirates threw the first punch on their second drive, attacking the App State blitz by tossing a screen pass resulting in a 63-yard touchdown. ECU claimed a 6-0 lead after a missed extra point.

“I just told coach Ponce ‘Hey man, go have fun.’ It’s his first time as coordinator,” head coach Shawn Clark said. “I told him, ‘You only get one time to make a first impression, so let’s go score a touchdown.’”

The Mountaineers wasted little time responding, putting together a seven-play, 66-yard touchdown drive capped off with a 34-yard connection between graduate transfer quarterback Chase Brice and super senior receiver Thomas Hennigan. Brice completed all four of his passes in the scoring drive and punched in his first touchdown as a Mountaineer with a dime across the middle of the field.

“When Chase came in, he wanted to be a part of this program. He wanted to come in and learn our culture,” Clark said. “He’s a natural leader for us. He’s not about him. He doesn’t care who gets the ball or who gets credit. It’s about winning football games.”

After allowing the early 63-yard touchdown, App State’s defense held the Pirates scoreless through the rest of the half, forcing three punts and one touchdown-saving interception. Senior safety Ryan Huff snagged a last-second hail mary attempt by ECU after the ball was tipped around the end zone and nearly brought down by a Pirate.

The Mountaineers entered halftime with a 20-6 lead.

App State started the second half with a quick punt, and the Pirates marched down the field, challenging the red zone before super senior defensive end Demetrius Taylor had a QB pressure to end the drive. ECU cashed in with a 38-yard field goal to make it a 20-9 game.

Brice and the offense wasted no time getting the score back, starting with a 68-yard strike to Hennigan over the middle to get to the ECU 18. App State rushed to the line, and Brice completed a quick throw to super senior wide receiver Corey Sutton, who shook off the lone defender and scored an 18-yard touchdown to stretch the lead out to 27-9.

“When I got here in January, I really just put my head down and focused on how I can better myself as a quarterback here at App and how we can win football games and keep the winning mentality and tradition alive,” Brice said. “A lot of that lonely work, a lot of that extra time really showed up tonight.”

With time waning in the third quarter, junior linebacker Brendan Harrington silenced the response drive with a blindside sack on ECU quarterback Holton Ahlers that the Pirates wouldn’t recover from. On the following Pirate drive, Harrington and super senior defensive end Tommy Dawkins Jr. combined for a sack.

In the first Mountaineer drive of the fourth quarter, sophomore running back Nate Noel rattled off a 46-yard run to get within the ECU 20-yard line. Junior running back Cam Peoples quickly subbed in for Noel and finished the drive with a 12-yard scamper to take a 33-9 lead and put the game out of reach for the Pirates.

“I told Nate tonight we were the one-two punch. That’s going to be hectic for somebody trying to stop. You can’t really gameplan for both of us,” Peoples said. “Me and Nate, I think we got a pretty good little duo going on, but you know, all of our guys bring something different to the table and that’s one thing about how our running back room is so special.”

After the touchdown, senior linebacker Tyler Bird forced a fumble on the kickoff, and sophomore running back Anderson Castle jumped on the ball, giving App State possession at the ECU 14. Brice attempted a touchdown pass to super senior wide receiver Malik Williams in the corner of the endzone, but cornerback Ja’Quan McMillan intercepted it.

The Pirates scored 10 points late in the fourth quarter, scoring a 39-yard field goal before Ahlers completed a 38-yard touchdown to tight end Ryan Jones to cut the lead down to 33-19 with 2:10 left in the game. The Mountaineers ran the ball three times on the final drive, ending the game and starting the season with a win.

“This was something we should do every year to an in-state opponent because the money stays in the state, and it’s great for both universities,” Clark said. “It was a great crowd. That’s what college football is about.”