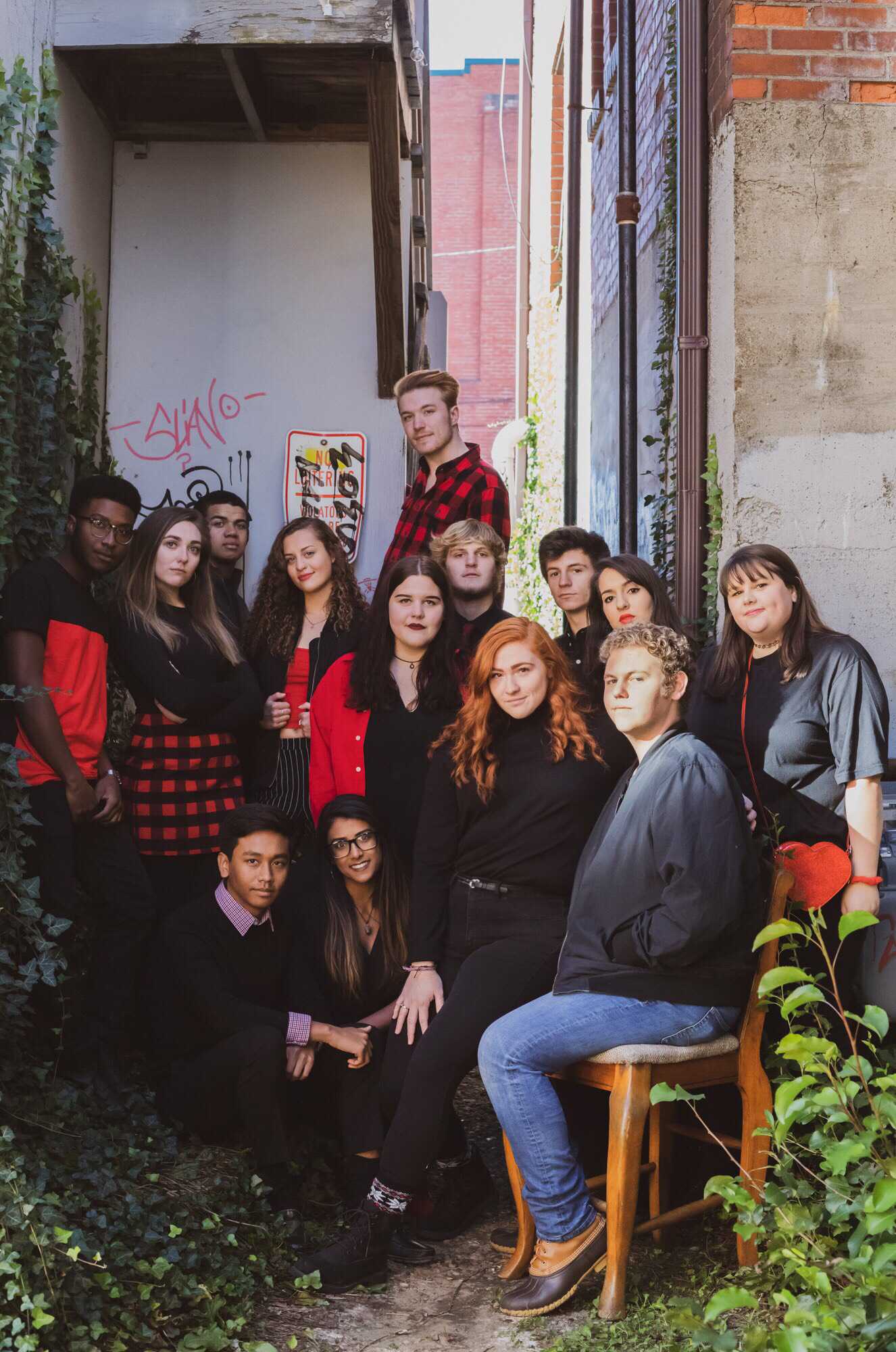 Members of the acapella group, Enharmonix pose together.

Year Established: 2000, one of the first groups

Sophomore marketing major Dalton Stroup’s favorite song he has performed with his group is “For Emma” by Bon Iver.

“It’s very simplistic and has to have a good soloist with it. A beautiful song when put all together,” Stroup said.

As the group celebrates its 18th year, it hopes to celebrate its long history at Acapellageddon this year with fun and engaging songs. “We were started with a clear purpose to have fun, hang out, and sing,” Stroup said.

“We won Best Co-Ed group last year at Acapellageddon,” senior public relations major Cayla Edwards said. “Having that opportunity to lead and shape the group and have that result was absolutely phenomenal.”

Apart from the competition, Edwards said it’s all about being with the friends she made through a cappella.

“The most important thing to us is having fun, and at the end of the day we’re not a competitive group, we are a social group. We are all friendly and supportive.”

“It’s something that we always keep in our back pocket,” Masin said. “It’s so fun whenever we play it, it’s always fun to have the crowd singing with you.”

Masin said the group’s diversity makes them special and gives them that extra spunk.

“We have had someone from Spain, someone from England, and having those different interests in music and ideologies is a really cool mixture that makes us unique,” Masin said.

Senior public relations major Lauren Small said one of the greatest moments for her group was when they went to the International Championship of Collegiate A Cappella for the first time her sophomore year in 2016. That year, Enharmonix made it to the semi-finals.

“That was the first time we ever competed in anything that big. Realizing we were good enough to be there and move on, that was one of the coolest moments,” Small said.

One of her favorite songs Enharmonix has performed was a cover of “Ultralight Beam” by Kanye West.

“Every time we travel, we grow so much closer,” senior hospitality and tourism management major Zac Jones said. “Anytime that we are growing closer, that is always a favorite moment for me.”

Strong Ties does philanthropic work on and off-campus, as it is considered a not-for-profit group. Overall, however, it is the relationships the members build with each other that matter most.

“We’re called Strong Ties because we want to build strong, lasting relationships between each other, the a cappella community, App State, Boone, North Carolina, wherever we can touch,” Jones said.

Colors: A light purple, or lilac

“We used to do retreat weekends where we would all go up to a mountain house near Sparta and hang out. We would make a circle and say good things about each other, and create fun memories,” senior English major Elizabeth Orange said. “Those sweet moments are my favorite, when we can put aside any worries and be together.”

For Acapellageddon, the group will go for a bold, feminine look on stage to accompany its “girl power” songs. “We always like looking a little sassy,” Orange said.

Genre Mostly Covered: Anything, though the group was founded as a Christian group and sings more Christian songs than the other groups

A special moment for junior recreation management major Rachel Keane was two years ago before Ear Candy went on stage for Acapocalypse (App State’s spring a cappella competition) and did its group chant.

“It’s a call and repeat. We start really quietly and then get louder and louder. It’s so much fun,” Keane said. Keane’s favorite song the group has covered is “Love, Where is Your Fire” by Brooke Fraser.

“When we sing it all together it is just so powerful with all of our harmonies. It just sounds so perfect all together,” Keane said.

Year Established: Has been revamped a couple of times, but really found its feet in 2016

Something special about Lost in Sound is that despite being reformed several times in the past few years, it all comes together in the end.

“We’re kind of a down-and-out group right now, not many people know who we are, but we really want people to have an outlet and a chance to get their feet wet with us,” junior building science major Mason Hill said. “It’s because we have reformed so many times that our group is so special. Falling apart and being able to bring ourselves back together has really tested our metal. It’s made us stronger each time.”