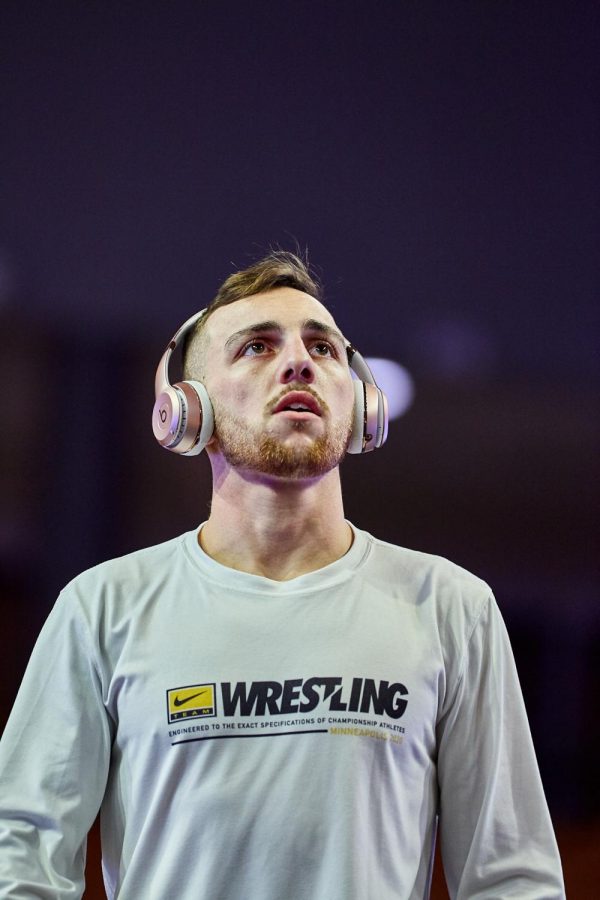 App State redshirt senior wrestler Codi Russell looks on before a match this season. The Atlanta native is currently ranked in the Top 25 in the NCAA at 125 pounds by all five major outlets. (The Open Mat, TrackWrestling, WrestleStat, Flo Wrestling, InterMat)

Codi Russell, a senior on App State’s wrestling team, said he’s been involved with the sport since he was about three and half years old – far earlier than most dream of joining a college team.

Russell’s dad, George, wrestled at Gardner-Webb University, so naturally, he passed the sport down to his sons; first Sean, and then Codi.

“When I came along, as soon as I could walk, my dad just went ahead and started making me and Sean wrestle each other,” Russell said.

Both brothers played baseball, football and wrestled, and Codi said they were super competitive in everything from an early age. He said they ended up focusing on wrestling because it was the sport they enjoyed the most success in.

“I think for me and Sean, we liked the one-on-one aspect,” Russell said.

“In wrestling, it’s just you out there,” Russell said. “If you didn’t put the work in or do the right things off the mat, then it’s going to show. We really liked that early on.”

From there, the brothers never looked back. Throughout his decorated career at Collins Hill High School in Suwanee, Georgia, Codi compiled a career record of 220-15. His senior year, he won the Georgia state championship and the National High School Coaches Association senior championship at 120 pounds.

Sean went on to become an NCAA all-American at Edinboro University in Pennsylvania before transferring to wrestling powerhouse Minnesota, where he went 28-6 as a redshirt senior with his only losses coming to top-5 ranked opponents.

Out of high school, Codi originally committed to wrestle at NC State, and spent a season there, before opting to enter the NCAA transfer portal and continue his career elsewhere.

“When he came to App, he had actually been off the mat for about a year, so physically, he was not where we needed him or where he wanted to be,” App State head wrestling coach JohnMark Bentley said. “There was a lot of rust when he got here.”

Bentley said Russell arrived in Boone during the summer, and those first few months of getting him back in shape and prepared to wrestle were a challenge. During Russell’s first semester competing for App State in 2017, he was far from the dominant wrestler Mountaineer fans have come to know over the past few seasons.

But, Russell turned it around in the second semester of his first season, going 6-1 in Southern Conference duals and eventually finishing as the SoCon tournament’s runner-up at 133 pounds. At the tournament, he notched an impressive 11-5 decision over the reigning conference champion, Chris Debien of Chattanooga, before dropping a tight 5-4 decision to SIU-Edwardsville’s John Muldoon in the championship match.

“Since then, he’s kind of been on an upward trajectory,” Bentley said.

As a sophomore, Russell compiled a 22-12 record, and claimed the SoCon title at 133, automatically qualifying for the NCAA Championships. At the NCAAs, he went 1-2, recording a pin in his victory over Ohio’s Mario Guillen, who beat Russell during the regular season.

Last year, as a junior, Russell went 26-10 and qualified for the NCAA’s again, this time from an at-large bid. He finished as the SoCon’s runner up at 133 for the second time after falling in the championship to a top-10 opponent. Due to the pandemic, the NCAA’s were canceled.

This year, Russell made the switch from the 133-pound weight class down to 125.

“I think he’s more confident at that weight, just mentally,” Bentley said. “In our sport, there’s no substitute for confidence. If you believe you’re going to have success, typically, that’s a pretty good indicator of how your match is going to go.”

“Right now, he’s wrestling some of the best wrestling he’s ever wrestled, and I think his confidence is growing,” Bentley said.

This is a good time for him to be reaching the top of his game, as Russell, his teammates and his coaches are locked in on the SoCon tournament, and after that, the NCAAs in St. Louis.

“I’m super pumped for postseason, hopefully everything happens and we get to have the tournament,” Russell said. “I want to get back on top of the podium for SoCon’s, and then I need the all-American this year.”

Will Formato, Russell’s current teammate and childhood friend, said that one of the biggest things that jumps out to him about Russell is the way he pushes himself through challenges.

“A lot of people don’t see the adversity that he’s had to go through. He’s had a lot of injuries and he’s still battling with stuff now,” Formato said. “The way that he’s able to come in every day and really push himself, and get the most out of himself with the way his body probably feels most of the time, is really inspiring. I can always appreciate that.”

With Russell’s older brother Sean receiving all-American recognition during his collegiate career, Codi joked that his family won’t even let him come home until he receives all-American honors of his own.

“Codi’s awesome. We give each other crap all the time, but he’s funny,” Formato said. “He jokes around and he tries to stay loose, but when the match time is coming up and he’s typically the first one to go out, he does a good job of really getting serious and getting in the zone. And then, the results show themselves.”

Russell is set to get his chance to reclaim the top spot of the SoCon podium at the conference tournament Feb. 28 at the Holmes Convocation Center in Boone. The NCAAs are set for mid-March in St. Louis.