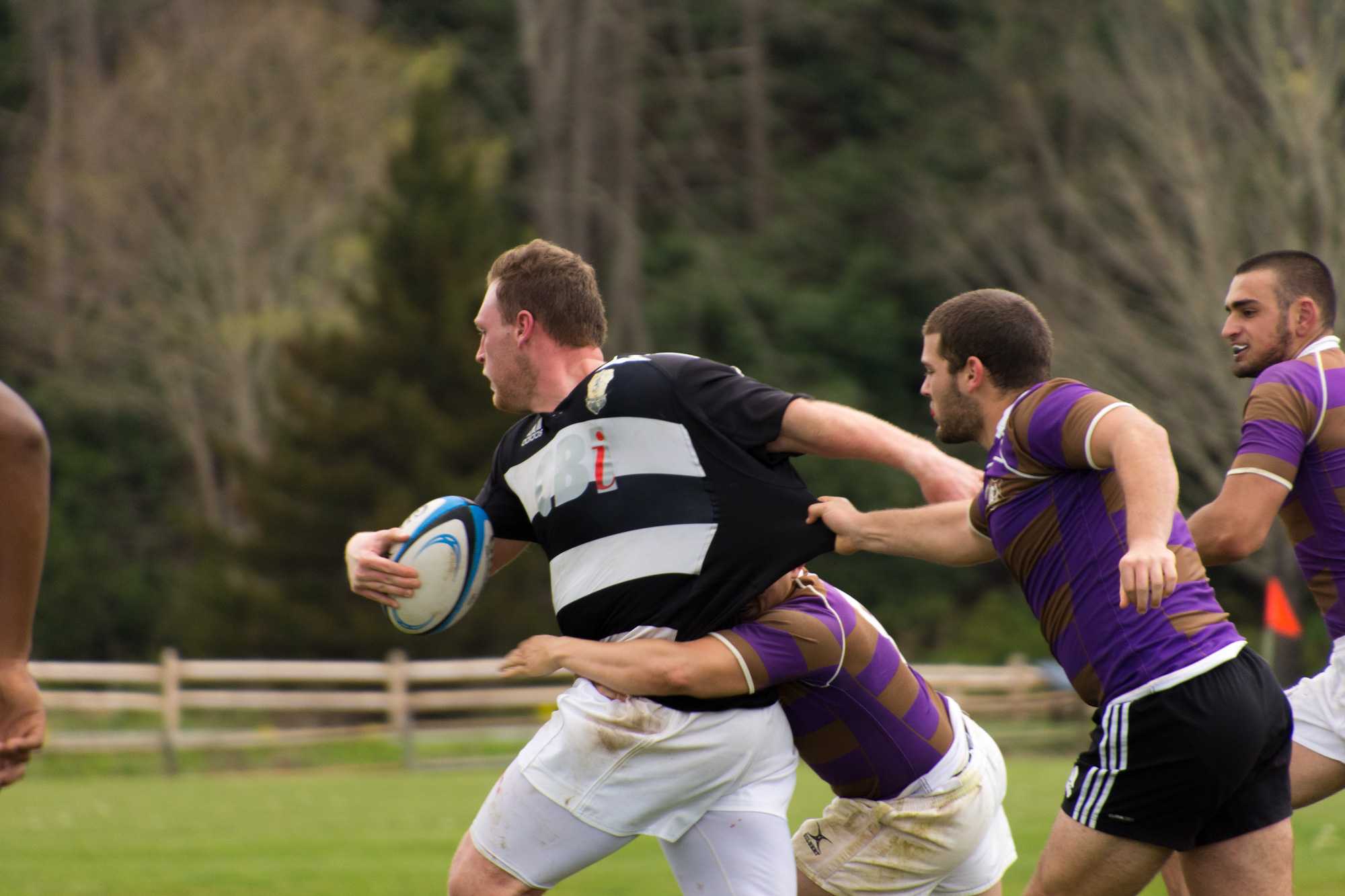 Senior prop Murphy Swancy attempts to run for a try against Western Carolina University on Saturday at State Farm. A try is the primary way of scoring and is worth five points. Photo by Dallas Linger.

Dominance was the name of the game for the AHO men’s rugby club on April 23. In front of over 100 spectators, the A-side team took home the Ruck”April”fest championship trophy after steamrolling through all three of their games.

Usually held in October, the annual competition was held in April this year, resulting in the name changing from Rucktoberfest to Ruck“April”fest.

Scheduling difficulties have prevented the event from being held during it’s usual month in the fall playing season for the past two years.

Cam Hunt, a senior and AHO’s current president and prop, believes firmly in the tradition of the tournament.

“This tournament has been going on for twenty years,” Hunt said. “We don’t want to let all of those guys before us down. This is our Super Bowl, you know, we take it very seriously.”

The B-side team showed significant improvement from the beginning of the season to the tournament, according to Gabe Cash, a sophomore flank and future AHO president.

“The improvement of our B-side team from the first game this semester is light years ahead,” Cash said.

“The biggest takeaway of the tournament was watching the B-side guys,” Hunt said. “That’s the future of the team. Fifteen out of fifteen players, pretty much, are graduating in about two weeks. So for our B-side team to come in here and take third place overall is huge for us.”

The B-side team tied UNC Charlotte in the opening game of the tournament but lost shortly after in a tight match to NC State.

Due to their tie, they were able to compete in the third and fourth place match against the College of Charleston.

They successfully topped Charleston’s team, winning their first and only match of the tournament but cementing their third place position.

The first game of the day for AHO’s A-side was against Western Carolina, a team they beat 69-12 in the regular season during the fall schedule.

The tournament rematch was no problem for AHO as they beat Western 76-0, keeping the game on Western’s side of the field for nearly the entirety of the match.

Wind and tries scored near the sidelines were little to no problem for AHO when converting for an extra point. The ball went through the uprights more often than not, allowing extra buffer room if Western had scored themselves.

Superior speed and strength on the part of AHO players were key to the team’s success. Coupled with Western’s inability to push through AHO’s defense onto the other side of the field or pass successfully down the line without turning over the ball resulted in the easy win for AHO.

The only room for improvement necessary for AHO would have been to increase their success in winning line-outs, getting the ball to their side after being thrown in by another player.

AHO continued the sweep into their next game against the College of Charleston.

They had no issue keeping running through their opponent and keeping them scoreless, ending the match 45-0 and clinching their position to compete for the championship title.

AHO was able to score nearly right away with a try off of a line-out, the ball swatted into AHO hands after being thrown in resulting in a quick break away.

Speed was once again key for AHO as they were not only able to break through Charleston’s line, but also form for scrums and get the ball into position.

AHO had a little more difficulty keeping the ball on the opposing side of the field this game, yet was still able to prevent Charleston from getting past the try line.

The last game of the day was the tournament championship between AHO and NC State.

Both teams went into the championship game undefeated having won their two respective qualifying matches. State won against AHO’s B-side team 19-10 and against Charlotte 17-7.

With strong momentum on AHO’s side, the team came out on top to win 28-7.

After four tries by AHO and only one by State, the team wrapped up the season with a much desired win.

The team owes its success to the hard work and practice in the weeks coming up to the tournament, according to Daniel Van Driesen, AHO’s coach and graduating senior.

Cash believes the skill and success of the seniors is what gave them the win.

“I just think the chemistry of the seniors, you know, they have been playing for four years and know how to do it,” Cash said. “They just showed up. They showed what they could do.”

When discussing the future of the team and advice for the players competing next year, Driesen and Hunt emphasized commitment to the team.

“Live it up. These are the best four years of your life,” Hunt said.