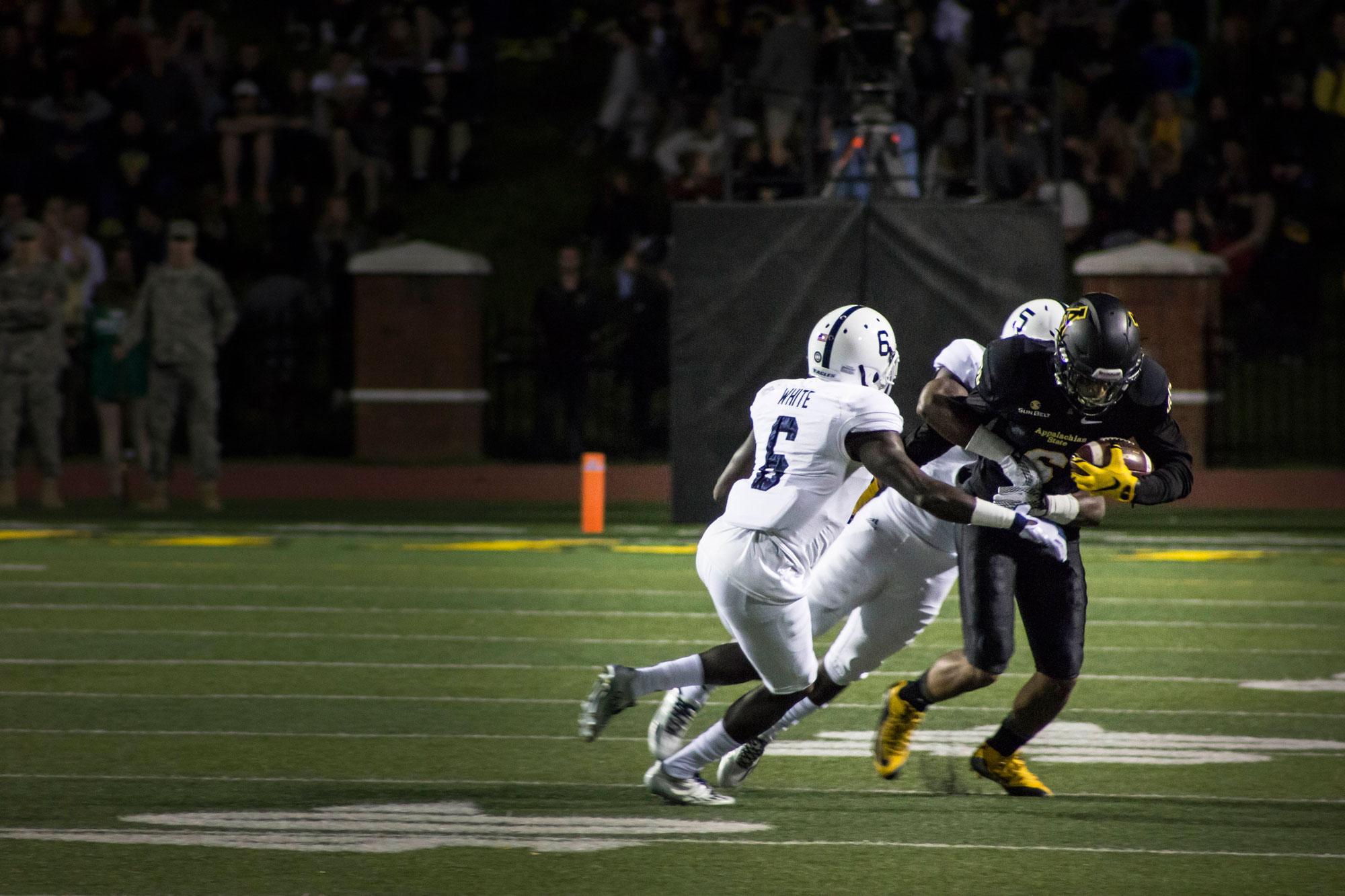 Since the game was played mid-week, the Mountaineers had less time than usual to prepare for the Eagles.

“If you had to pick a team to play on a short week, it probably wouldn’t be Georgia Southern,” head coach Scott Satterfield said. “It’s a hard task to stop those guys. Everybody knows they’re running it, and it’s still hard to stop them.”

The Mountaineers were up to that task, holding the nation’s No. 1 rushing offense to a season low 188 yards rushing.

“We outrushed them,” Satterfield said. “That was a goal of ours coming into this game, and for us to be able to do that speaks volumes of our offensive line, our running backs and Taylor [Lamb] operating the offense.”

Junior running back Marcus Cox was a big part of the Mountaineers rushing attack. Cox ran for 90 yards, was second on the team in receiving yards with 36 and scored two touchdowns in the victory.

The defense had a strong outing as well. Junior defensive backs Alex Gray and Mondo Williams each got an interception and the unit held the Eagles 211 yards below their rushing average.

Senior defensive lineman Ronald Blair was a playmaker all over the field. Blair led the team in tackles with eight, and three of those were for a loss. But even when he was not adding to the stat sheet, Blair was breaking up runs in the backfield.

“Ronald’s effective versus anybody he plays,” Satterfield said. “He’s got extremely long arms and he is so powerful. I can’t say enough good things about Ronald. He’s a mismatch for anybody we’re gonna play against. He’ll be that way all season.”

Blair felt this game was personal for him and the team after the 34-14 loss the Mountaineers suffered to the Eagles last season.
“It’s always a big thing when you play Georgia Southern,” Blair said. “It was pretty much a slap in the face. It was a whole lot of trash talking last year and we just felt like we owed them one.”
The primetime element only added to the rivalry, and the Mountaineer fans were a factor in the win.

“We had a great crowd, and we really fed off of that crowd,” Satterfield said.

With this win, the Mountaineers are bowl eligible for the first time in the program’s history. Senior wide receiver Simms McElfresh, who had 66 receiving yards and a touchdown in the win, has been at Appalachian State throughout the recent transition period.

“I’ve been to the playoffs at the FCS level and now being able to be bowl eligible in the FBS level is huge,” McElfresh said.

While the team is still taking it one game at a time, Satterfield said it was awesome to get to that six-win milestone.

“That’s where everybody looks at,” Satterfield said. “That six-win mark. And for us, in our first season that we can go to a bowl, we’re there in seven games. That’s pretty sweet.”