Another tough loss for Mountaineers 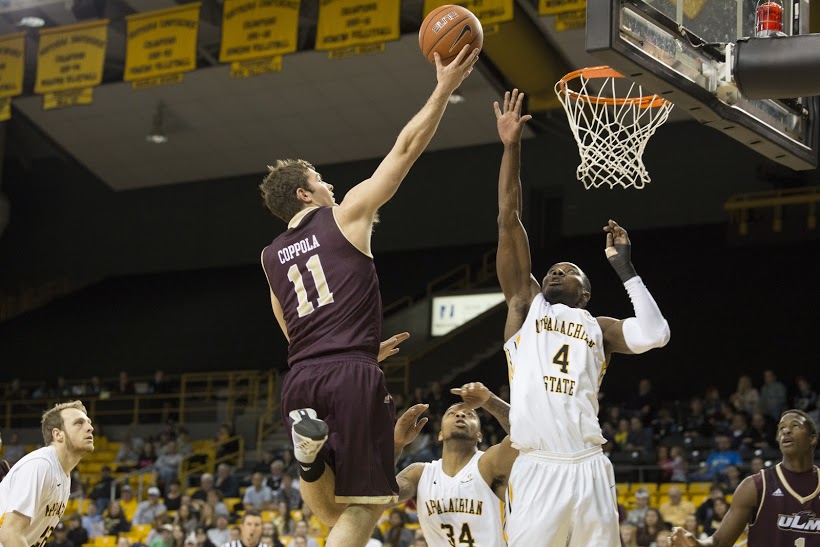 Warhawks guard Nick Coppola lays in the go-ahead basket with 9.7 seconds remaining to put ULM up 91-90 over App State. Coppola scored 25 points in the victory.

Another heart breaking 1-point loss at home on Saturday evening showed the Mountaineers (6-17, 4-8 Sun Belt) they still have some growing to do in tight games. App State gave Louisiana Monroe (11-12, 7-5 Sun Belt) only their second road win of the season falling 91-90.

Scoring was not an issue for the Mountaineers, shooting 57.4 percent from the field and 60 percent from the 3-point line. Freshman forward Bennett Holley tied his career high with 13 points on 4-5 shooting and 3-3 from the three.

“I just found myself open and I had a lot of confidence, and my teammates gave me the ball,” Holley said.

The Warhawks jumped out to a quick 9-0 run in the first three minutes of the game before App’s offense awoke to make it a tight game the rest of the way.

“We were getting good looks and we are a team that can shoot the ball depending on who is in there,” head coach Jim Fox said.

App State trailed ULM 44-41 at the end of the first half.

The second half had Holmes Convocation Center witness, once again, another nail-biter. There were 10 lead changes and five tied scores during the second half.

App State’s starting big men Griffin Kinney and Tyrell Johnson found themselves in foul trouble to combine for only 15 minutes, forcing the Mountaineers to show the depth they have. Senior guard Frank Eaves, who finished the night 21 points, didn’t feel the lack of Kinney and Johnson caused much concern.

“Next man up is our philosophy,” Eaves said. “I think we have a great deep team this year and it will help us down the road. We have players that come in and give us good minutes. We have guys that are capable of making plays.”

The Mountaineers took an 87-80 lead with 3:11 to play, causing the crowd to feel the game was all but over. Fox has seen many collapses and knew they had to stay focus.

“We’ve been through this before,” Fox said. “I don’t feel we have them until the end of the game.”

With 1:45 to play, senior guard Chris Burgess hit the presumable game winner to put App State up 90-85. However, costly fouls throughout the next two minutes brought the Warhawks within one, 90-89.

ULM guard Nick Coppola, drove to the hoop for a finger-roll layup to put them up 91-90 with only 9.7 seconds remaining on the clock. Coppola finished with 25 points for the Warhawks.

Drawing up the final play, the plan was for Eaves to take the shot and for freshman guard Ronshad Shabazz to get the rebound.

“Frank got a shot and nobody ever boxes on the last second shot so we sent our guys to the glass,” Fox said.

Eaves missed the shot and Shabazz grabbed the rebound in the air, going for a two handed dunk but ultimately missed to give ULM the win.

“The play happened so fast and I did what I could, I felt I was hit, but it just didn’t fall in,” Shabazz, who finished with 27 points, two short of his career high, said.

The Mountaineers, who were 6-2 in games decided by five points or less, fell to 2-5 in the same category this season. Eaves had much confidence still in the team with eight games remaining.

“We just have to learn how to close out games better,” Eaves said. “My dad always told me things happen for a reason. We have eight games left and I think we have an opportunity to win each and everyone of them. I think the lesson we are learning will help us down the road and are valuable lessons.”

The Mountaineers head back on the road to Texas this week taking on Texas State Thursday at 8:30 p.m.