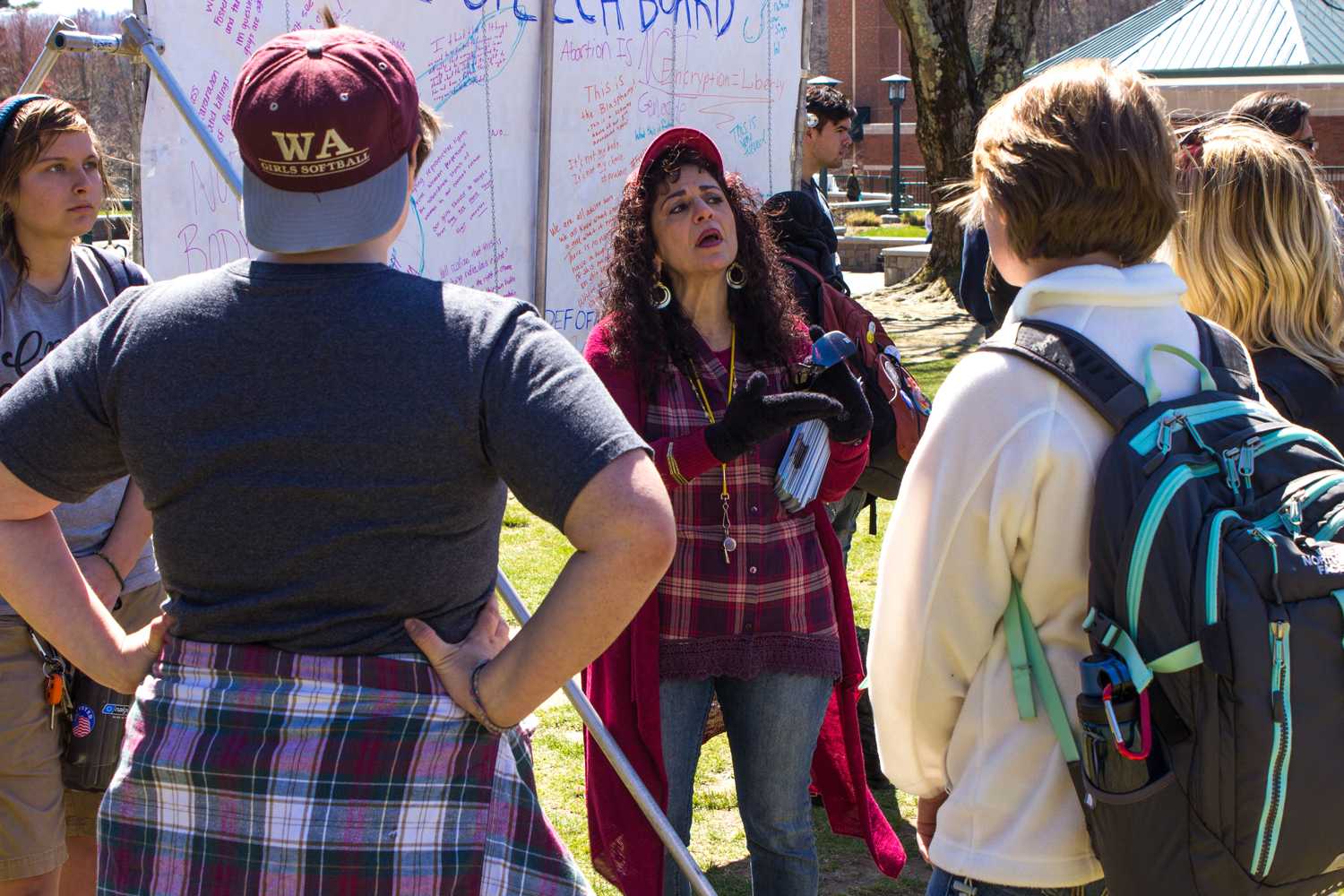 On Wednesday, March 30, Sanford Mall was the site for an anti-abortion protest held by the organization AbortionNO, which displayed large images depicting abortion procedures, comparing abortion to genocide.

The exhibit is featured on many college campuses across the country and consists of large pictures from the Rwandan Genocide next to fetuses which had been aborted. Placed beside this display was “The Free Speech Board,” encouraging students to state and write out their opinions about the display and abortion in general, and a poll table, which posed the question, “Should abortion remain legal?”

This demonstration is part of AbortionNO’s education project entitled “Genocide Awareness Week.” This particular movement was started in 1998 and is the Center for Bio-Ethical Reform’s largest outreach project.

Students who walked by the exhibit were given a pamphlet that summated the message of the exhibit. Inside the pamphlet, a chart titled “comparing abortion to other forms of historical genocide” appears and among these subject matters are the Holocaust and slavery.

The same images which were displayed on Sanford Mall were also placed in the pamphlet. These images consist of dismembered and still, bloodied fetuses next to quarters and dimes. Also included in the pamphlet are pictures of dead victims of the Holocaust and U.S. slaves who had been hung.

Moreover, the pamphlet defines “genocide” and “preborn” in the hopes that the readers will see how they are similar to one another. The pamphlet read, “If the preborn are living human beings – science tells us they are both alive and human – then abortion kills 1.2 million humans every year in the U.S. If not genocide, what else would we call it?”

On the very back panel of the pamphlet is the quote, “We do not equate aborting mothers to Nazis; many such mothers are themselves victims. Our purpose is never to condemn anyone for past abortion, but to protect children and mothers from future abortions.”

Also on the last panel of the pamphlet comes this statement from the Center for Bio-Ethical Reform: “CBR condemns all abortion-related violence and will not associate with groups or individuals who fail to condemn such violence.”

Jo Littin, a woman associated with the proceedings of the display, said the point of this exhibit was “to love people” as opposed to making them angry.

“College is to get a 360 degree view of all the issues, not to be protected from things that might be difficult,” Littin said. She adds that it is important to equate abortion with genocide because “most people agree that genocide is wrong.”

However, many students voiced their opinions that this was an ineffective way to approach the subject.

“This is just not the way to come at people with anything. This is a really violent way to come at something,” Chelcie Williams, a junior theatre arts major, said.

Clayton Robinson, a sophomore English major, said that, contrary to what AbortionNO’s claim the display is, this is not educating, but demeaning.

“It’s shaming,” Robinson said. “They are taking women, women who may have had abortions or are considering abortions, and making them feel like monsters.”

Freshman theatre arts major Mia Steffen said that Sanford Mall is an unavoidable area for most people, and this is a major upset to the normal discourse of the college community.

“So women who may have had an abortion are going to have to pass this on their way to class and aren’t going to feel safe or welcome on this campus because they’re being compared to Nazis,” Steffen said.

The protest features many graphic depictions of abortions and compares them to historically graphic events to strengthen their argument that “abortion is, in fact, genocide,” Littin said.

“This is a very historically insensitive stance to take because I don’t feel like you can compare legal abortion to illegal murder and genocide,” Steffen said in response to Littin’s claim.

“The Free Speech Board” beside the graphic photos was covered in writing by students expressing their distaste for the display.

Gallery (warning: some photos may be explicit and/or offensive to some): [showhide more_text=”Click to show photos” less_text=”Click to hide photos”]

Alex Cobb, senior interdisciplinary studies major, said that despite many people being upset at the protest, for people to “run off anyone who says something you disagree with, and have the school censor them because people are feeling uncomfortable, is both wrong and disadvantageous to our school.”

“Free speech is a basic human right guaranteed to everyone, regardless of whether or not the person speaking is in the right or wrong,” Cobb said.

AbortionNO claims that the use of these graphic images holds more relevance than just the shock factor, Littin said, reiterating the statement made on their official website. But many students who viewed the exhibit feel differently.

James Filloramo, junior biology major, felt that it was outright vulgar and distasteful. He said he is open to any point of view, pro-life or pro-choice, but stating that view or trying to convince people of your view in that way is totally inappropriate.

“It was pretty upsetting to see something so gruesome and vulgar where people are usually relaxing,” Filloramo said.

When Filloramo was walking by Sanford Mall this morning talking to his roommate, he said they saw a middle school group of children walking by the signs.

“It was very rash, and a lot of the language used was very aggressive; in specific, the word ‘genocide,’” Filloramo said.

Ainsley Trickett is an Australian exchange student who understands the respect for the notion of free speech in the U.S., and she said she is glad that this country and her own celebrate it. However, Trickett said that a display such as the protest on Sanford Mall would never be tolerated back at her home.

“I felt, and many of my friends, American and international, male and female, agreed with me, that it was a vicious and aggressive attack on the rights of women,” Trickett said.

Trickett also said she felt extremely confronted and distressed, so much so that she had to leave her class after seeing the display because it shook her to tears.

“I was genuinely horrified that such an aggressive display was allowed in an educational environment,” Trickett said. “I respect that people have differing views on controversial issues. What I do not respect is the aggressive and demonizing way in which their opinion was displayed.”

Trickett wrote on her stomach during the protest, “My uterus, my choice,” which reflected her acknowledgement that women have the right to decide the progression of their lives and their bodies.

“I’m pro-choice, which means I can identify that there are options,” Trickett said. “Shaming and vilifying the female populace for their own body and their own choices goes against the way I was raised, with respect and equality for all.”

There was a Facebook post by a student about the event on the App State classifieds page, encouraging students to email the vice chancellor and chief of staff Rand Edwards if they were repulsed by the imagery presented on Sanford Mall today.

Laurel Littler, senior commercial photography major, responded to the Facebook post. She commented that she is the founding president of Students for Life at ASU. She wrote that the entire foundation of the club was to create a “peaceful, loving conversation on campus” about the rights of pregnant students and mothers on campus.

Littler communicated that she originally started the club to bring to light the disadvantages women who choose to keep their children have at this campus. Littler penned in the comments that there is no parking, baby changing tables or scholarships available for pregnant women on campus.

“The genocide awareness project contacted me about a month ago and I flat out told them that coming to ASU would do more damage than good,” Littler wrote.

Littler stated that the goal was never to shove an opinion down the throats of the community but to offer solutions to problems that exist for women who decide to have children while in school.

Littler added that, “We are all like cups, we pour out what is poured into us. If we pour out civility, they will slowly but surely do the same.”