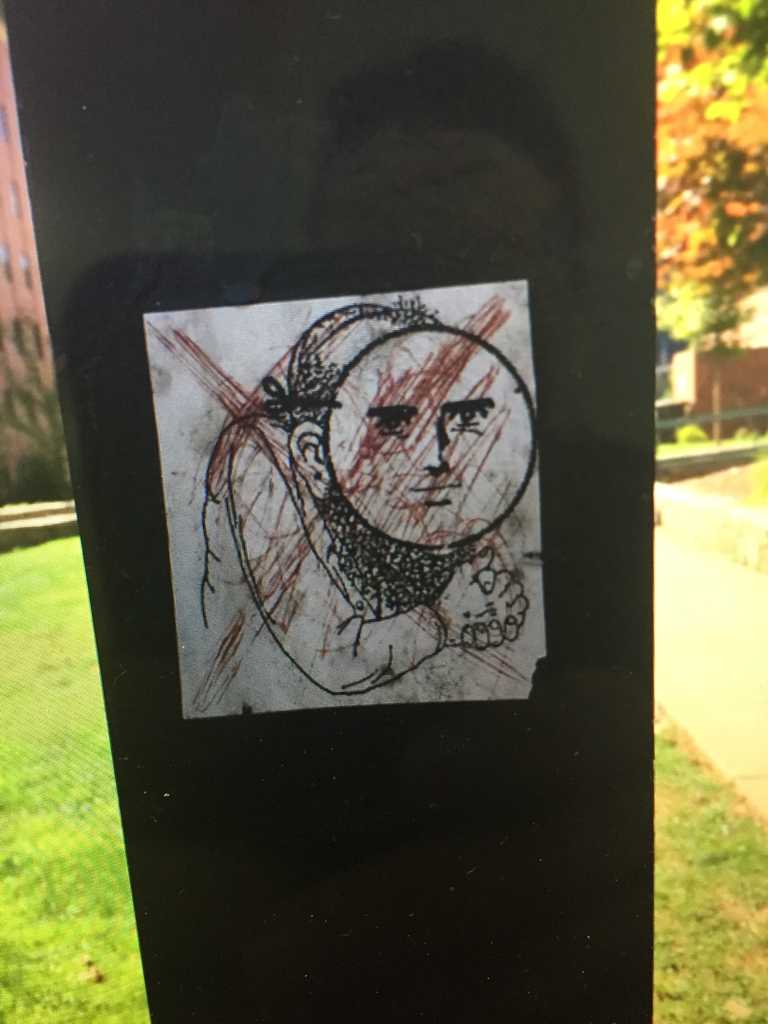 An anti-Semitic sticker found behind Hoey and Lovill halls on Sept. 27.

BOONE—On the morning of Sept. 27, a student discovered two antisemitic stickers on light poles behind Hoey and Lovill halls. The stickers were reported immediately to the Office of Equity, Diversity and Compliance, as well as campus police who responded to the incident.

“There was an individual attempting to hang up a flyer on a display case reserved for the women’s center,” Shea McCullough, a senior film studies major who was working the desk in the women’s center at the time of the incident, said. “One of our volunteers saw them and tried to get a picture of who it was but only got a photo of the back of them. I don’t know if they’re a student. They were tall and male. I think they had a mustache. They were wearing a black jacket with leather elbow patches.”

University police and the Office of Equity, Diversity, and Compliance have been notified of both incidents.

“Anytime a student or a group is threatened we take that very seriously,” Capt. Johnny Brown from university police said. “We treat it like any other event.”

According to university police investigators, there are currently no suspects in the sticker investigation due to the video footage not providing a clear view of the area. However, university police said that they would like students and staff to remain vigilant and involved by reporting any similar events.

“If a student expresses concern about something on campus, we want to address that so that they know we are a resource they can come and talk to,” Brown said. “We want students’ perspectives so that we know what we can do to make it better.”

Campus police said that it wants students to understand that it is the department’s goal to make sure that discriminatory language and artwork is not a part of campus life.

“I know people don’t want negative things displayed,” Jason Cornett, an investigator with university police said. “That’s why we need help from students and staff to make sure crime scenes are preserved. If you find something, call us.”

University police want to remind students that if they have an issue reporting a crime to use the Rave Guardian app, or to text 911 themselves. Without help from students, it would be hard for campus police to catch someone in the act.

“The investigation into the stickers is still active, but we have no closure as of right now,” Cornett said. “There’s no evidence that could connect these stickers to the Identity Evropa banner at this time, so we do not believe they are related in any way.”

Avery Walter, a member of the App State Student Organizing Coalition and a senior Sociology and Psychology Double Major says that she’s had enough of the hate on campus.

“The Chancellor has always been reluctant to address hate in her emails, and even in her email about the banner drop she never condemned the organization as being White Supremacists. Eventually, students are going to get tired of these supremacist groups and the lack of response from administration, so I can see this escalating into direct action. Easily.”

Marisa Fernandez, a junior philosophy major, and president of Hillel, a Jewish organization on campus, said that she wants to encourage campus and security and other students to help in these situations.

“The only thing campus security and others can do at this point is help protect minority groups and to be aware of what is going on in their community,” Fernandez said.

As for the No Hate App State campaign, Fernandez said that she feels that the campaign is not doing enough to protect the minority population here at Appalachian.

“I don’t think it is active enough,” Fernandez said. “I think having a slogan people can get behind is great, but it is meaningless without action. It’s on faculty, staff and students to know what hate looks like and to call people out on it if they feel comfortable doing so and reporting it if not. But if anyone does ever witness hate or bias, it should be reported to ASU Police Department as well as the folks at the Office of Equity, Diversity and Compliance.”