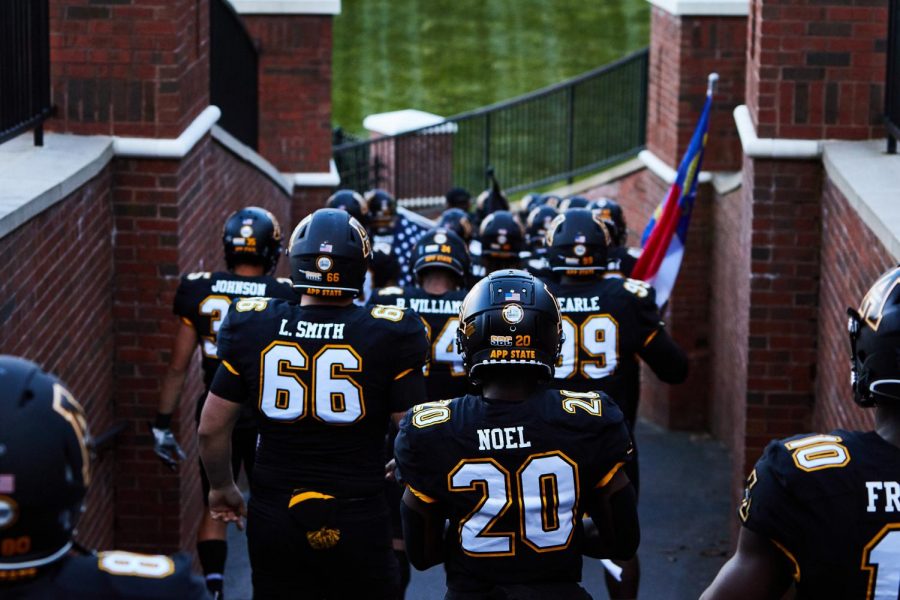 The Mountaineers march into The Rock ahead of their late 2020 matchup with Troy. Sophomore running back Nate Noel enters 2021 after posting 510 yards on 82 carries in 10 games as a freshman. He tacked on three touchdowns in those 10 games.

In Shawn Clark’s first full year at the helm of the App State football team, the former All-American led his alma mater to a 9-3 record. The nine wins included an 8-point victory at rival Georgia Southern and a 56-28 thumping of North Texas in the Myrtle Beach Bowl. The bowl victory upgraded the Mountaineers’ bowl record to 6-0 in its six consecutive bowl appearances since joining the Division I Football Bowl Subdivision in 2014.

Heading into 2021, App State returns ample depth and experience, including 21 super seniors and graduate students and 17 of its 22 starters from the 2020 season. Demetrius Taylor, Baer Hunter, Corey Sutton and Thomas Hennigan are some names that headline the class returning for its fifth year. Across the past four years, the group has accounted for 42 victories, including four bowl championships and just 10 losses.

A plethora of the Mountaineers have been named to national preseason award watch lists, highlighting some of the nation’s top players. The recently released Walter Camp Player of the Year watch list included Taylor as one of just three defensive ends on its list.

App State returns fully loaded at every skill position, likely running out a starting receiving trio of super seniors, including Sutton, Hennigan and Jalen Virgil. Camerun Peoples, Daetrich Harrington and Nate Noel all return to anchor the backfield, but Notre Dame transfer Jahmir Smith joins the crew to add even more depth at the running back position. On the defensive side of the ball, Taylor and Caleb Spurlin star on the defensive line. In 2020, Spurlin was the only FBS player with multiple sacks and receiving touchdowns. Brendan Harrington, D’Marco Jackson, Trey Cobb, Shaun Jolly and Kaiden Smith all enter the season with preseason All-Sun Belt recognition.

For the first time in years, the Mountaineers will start an unfamiliar face at the quarterback position. Following the departure of Zac Thomas, who went 32-6 as a three-year starter at App State, graduate transfer Chase Brice decided to join the team. Brice brings extensive high-level experience to Boone after spending three seasons with the Clemson Tigers and one season as Duke’s starting quarterback. Brice has appeared in 36 FBS games and has thrown for nearly 3,200 yards and 19 touchdown passes.

The Mountaineers kick off their season Sept. 2 in Bank of America Stadium, taking on the East Carolina Pirates. The Black and Gold then head to Miami, Florida, to take on the Miami Hurricanes just over one week later. App State plays its most crucial conference games back to back at Louisiana Oct. 12 and at home against Coastal Carolina Oct. 20.