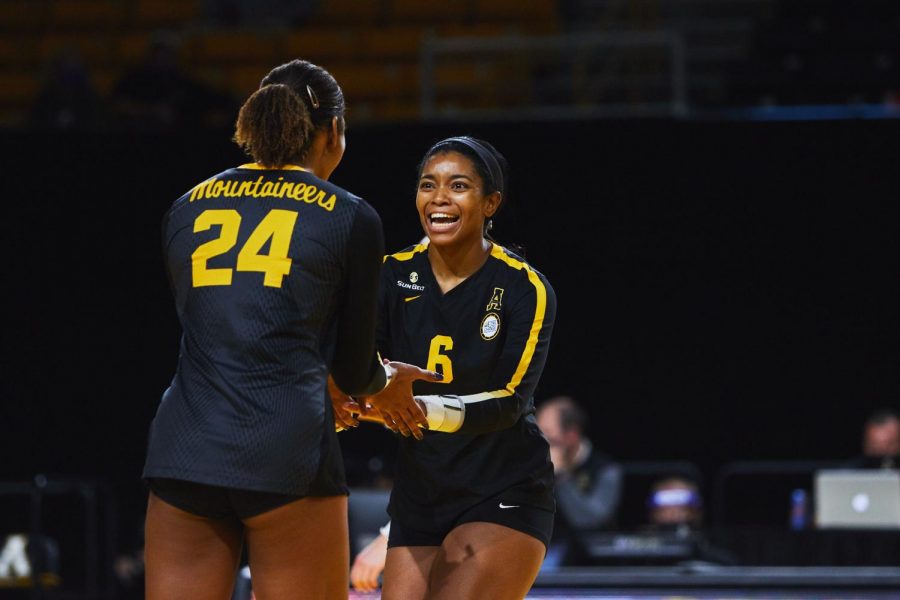 Senior Grace Morrison celebrates with her teammate, junior Daryn Armstrong, after scoring a point. Armstrong enters her senior season after totaling 55 kills and 52 blocks over her first three years in the Black and Gold.

The App State volleyball team enters 2021 coming off of a disappointing 1-15 season, including 1-10 in Sun Belt action. The Mountaineers finished dead last in the East Division and just one game from the bottom of the conference. However, the numbers don’t tell the full story.

The 2020 volleyball season was one riddled with uncertainty. It was an unprecedented year that saw numerous postponements, cancelations and quarantines. Despite the difficulties that came along with COVID-19 in college athletics, head coach Matt Ginipro would be the first to say the season was much more successful than the 1-15 record may suggest.

“Through all of the insanity … everybody was great,” Ginipro said. “That’s the biggest positive I take out of this whole thing. That it was the best one-win season that I’ve ever been a part of.”

The Mountaineers return several key players, most notably Sam Bickley and Emma Reilly. Bickley enters her junior year after totaling 1318 assists, 244 digs and 63 kills in her first two years in Boone. The setter earned one Sun Belt Freshman of the Week award and one Sun Belt Setter of the Week award as a freshman and has appeared in 42 matches across her career. Reilly returns for a fifth year in the black and gold, electing to take advantage of her extra year of eligibility given to all athletes due to COVID-19. Reilly has already amassed 1,677 digs (fifth in program history), 143 service aces (fourth in program history), and two All-Sun Belt honors as a Mountaineer. The libero even earned All-Sun Belt First Team honors in 2019. Given a more typical year in 2021, Ginipro believes Reilly is “a shoo-in for beating the career digs record.”

The Holmes Convocation Center will host the Mountaineer Classic on Sept. 10-11, featuring Charlotte, Bellarmine, Wake Forest and App State. The Mountaineers open up conference play shortly thereafter and conclude the season with a trip to Conway, South Carolina, to take on a Coastal Carolina squad that finished 2020 with a perfect 16-0 conference record and a national rank of #14.

The Mountaineers open the 2021 season with an exhibition match at Tennessee on August 20.