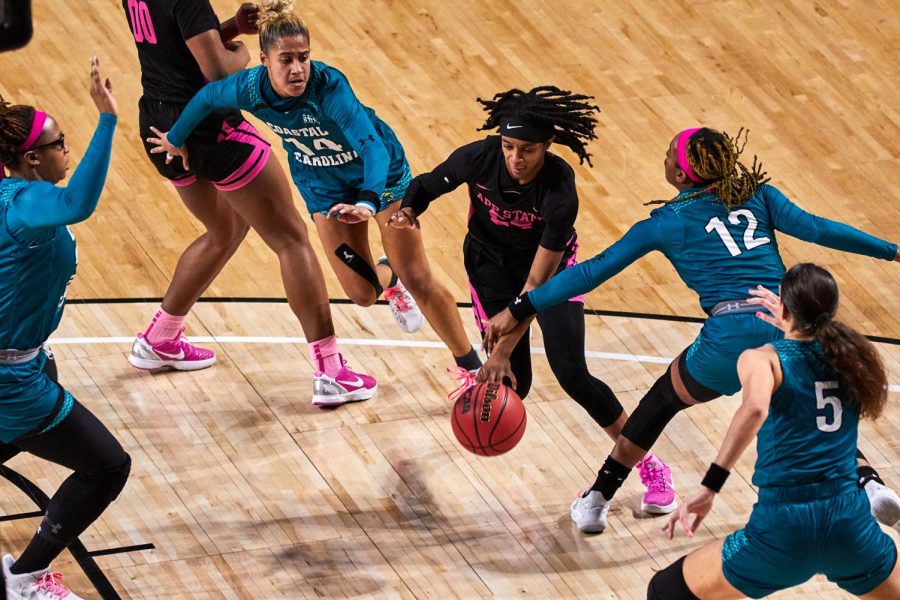 Redshirt junior Janay Sanders attacks the paint in the Mountaineers' annual Pink Game vs Coastal Carolina. Sanders averaged 10.9 points, 3.2 rebounds and 1.4 assists per game as a sophomore and started in 10 games.

Last season, App State women’s basketball finished with a winning record for the second time in the past three years, the fourth-most Sun Belt wins, and won seven of its last nine games down the stretch of the season.

Led by veteran seniors, forward Lainey Gosnell and guard Pre Stanley, the Mountaineers posted a 15-12 overall winning record, including a 10-8 record in Sun Belt play. For their efforts throughout the season, Stanley was named First Team All-Sun Belt, while Gosnell was given Second Team honors. Stanley, who led the Mountaineers in both points and assists, also led the Sun Belt in total points (256), was third in points per game (14.2), and fifth in steals (1.5). Gosnell finished the season as the only player in the conference ranked in the top 10 in scoring, rebounding, 3-pointers attempted, 3-pointers made and offensive rebounds.

In Sun Belt tournament play, the Mountaineers picked up wins over ULM and a quarterfinal victory against UTA before finally dropping a 66-63 battle against No. 1 seed Troy, despite a personal-best 29 points and 14 rebounds from Stanley. She earned All-Tournament honors after averaging 20 points per game, good for fourth overall in the tournament.

For her tremendous career at App State and her remarkable senior campaign, Stanley became the first player in program history to receive a WNBA Training Camp invite, eventually signing a contract with the Washington Mystics. She currently plays with the PAOK KYANA program in Greece.

Despite losing two superstar seniors, the Mountaineers look to fill the voids and continue building a winning culture with the additions of transfers Taylor Lewis, a forward from Middle Tennessee State, forward Summer Schloss from UAB, forward Alexia Allesch from Seton Hall and guard Nevaeh Brown from Wake Forest. App State also announced the addition of guard Breanna Locke, a graduate transfer from Emmanuel College, who averaged 22.3 points, 9.3 rebounds, 4.2 assists and 1.6 steals per game last season. The Mountaineers round out their 2021-22 roster with the addition of four incoming freshmen.