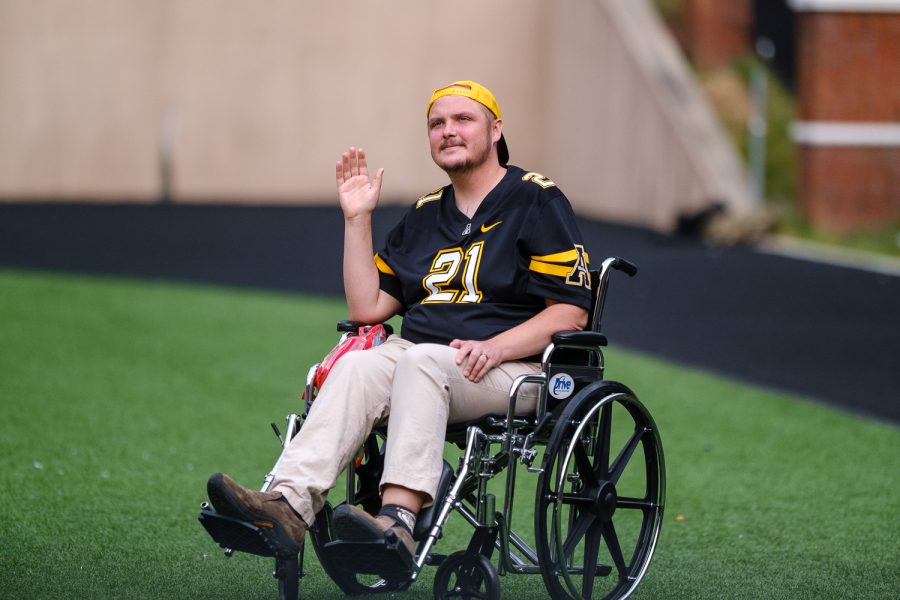 Michael Morgan, a 2019 App State graduate, waves to the crowd while being honored as Alumni of the Game at the home opener versus Elon.

The App State community rallied around 2019 graduate Michael Morgan in February when he was going through a third battle with acute myeloid leukemia. Morgan made a full recovery in the spring.

In August, Morgan went through what was believed to be the third relapse and has been wheelchair bound while battling through his fourth bout of chemotherapy. While in the middle of a challenging time, Morgan received a message from Jason Schick, the partners service coordinator for App State, informing Morgan with surprising news.

Morgan became the Alumni of the Game for the home opener against Elon and was honored during the third quarter fieldside with a special announcement, where he was welcomed with cheering and clapping from App Nation.

“It’s just crazy. I love my school, and I never would’ve imagined this honestly,” Morgan said. “The fact that they were willing to reach out to me and make me the Alumni of the Game is pretty cool. I knew I was going out there for the third quarter, but that was the extent of it.”

After being on the field, Morgan went immediately back to work on investigating his situation and if he could go back to a normal life.

During Morgan’s initial prognosis at Wake Forest in August, he was told he had no more than one to two years left in his life. He and his wife, Emily Morgan, were shocked by the news and decided to take a trip to MD Anderson, the University of Texas’ comprehensive cancer center, which specializes in the cancer Morgan has. The GoFundMe that was set up in 2019 for the family has now reached over $9,000 and counting, paying for the trip to Houston.

“We decided we were going to go down there, get a second opinion. Got a bunch of tests done… basically made a complete 180 from what we originally heard. They were saying that my cancer did come back the first time,” Morgan said. “They were saying I had a leukemia seed back in my spine that grew, and that’s where my second relapse came from.”

What was once seen as a life-or-death situation for Morgan turned out completely different during his visit to MD Anderson, with doctors saying he never truly had a third relapse. The doctors at MD Anderson said the bone marrow transplant he had in 2019 would make sure cancer never returned. In just a matter of days, Morgan went from preparing for the worst to overwhelming joy.

“It was something that presented itself as a relapse, but it wasn’t. At this point, they’re saying I’m good,” Morgan said. “They don’t think it’s going to come back, they think everything looks good from here. Of course, there’s always a chance that it does come back, but it’s not the inevitability that they were telling me before.”

Initially, there was a real thought for Morgan that the Elon game would be one of the last games he would attend at The Rock. In MD Anderson, the emotions flowed for the Morgans once doctors gave them the good news.

“Sitting there in the hospital, and they told me that, I grabbed my wife’s hand. We were beyond elated. Made that trip a lot better than you thought it was gonna be,” Morgan said. “Thinking that’s going to be one of the last big trips of your life and it ended up not being. It was crazy.”

Knowing this, the Morgans have their sights set on the future. After many years of coping with Morgan’s diagnosis, their biggest plan now is to become a foster home soon.

“We’re going to continue to live our lives, and we’re working on becoming a foster home at this point and just fulfilling my life goals,” Morgan said.

After Morgan got home from that trip, he made a last second decision to attend the App State-Coastal Carolina game Oct. 20. He was able to attend the Mountaineers’ thrilling victory in front of the fourth largest crowd in school history. There was still a bit left to be desired for Morgan, even after the incredible night.

“I did some last second finagling. A friend of ours on Twitter actually gave me the tickets, and I’ve been to a lot of App games, but that was probably one of the best,” Morgan said. “Definitely glad I was able to go to that one, but the one thing that I wish for was that my leg was well enough to go out on the field with everyone else, but that was something else.”

Once Morgan recovers from the bone marrow transplant and is able to walk easily on his own, he’ll be able to attend more App State games without worry.