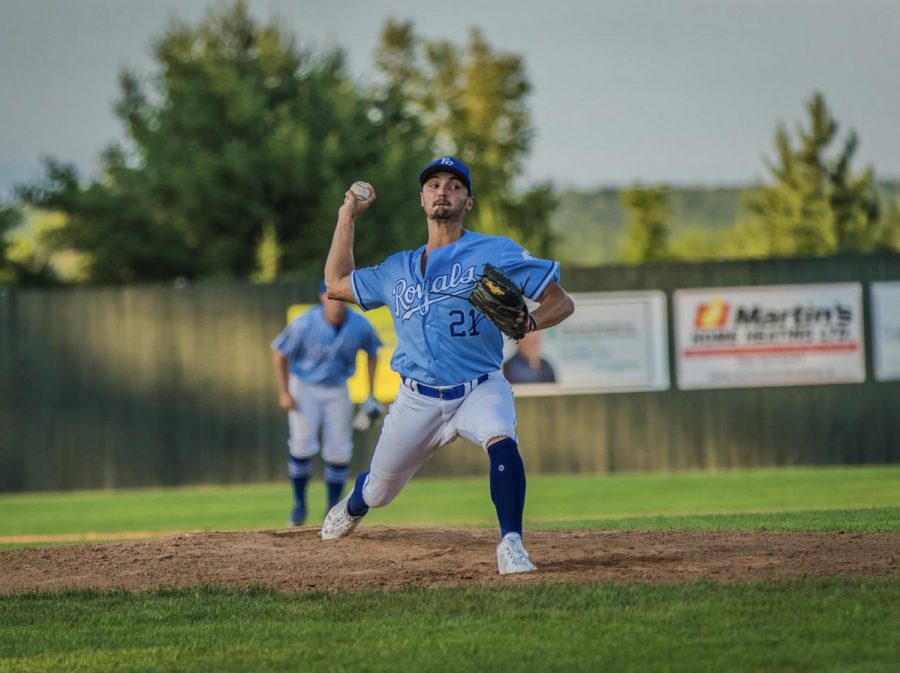 Former App State pitcher Kaleb Bowman pitches during a game with the Fredericton Royals, a member of the New Brunswick Senior Baseball League in Canada. In 2019 with the Mountaineers, Bowman set a program record for most innings in a season by a reliever.

At App State, Kaleb Bowman’s talents were clear as a pitcher for the baseball team. In the 2018-19 seasons Bowman made 52 appearances for the Mountaineers, finishing his career with a 3.76 ERA and 8-2 record. In 2019, Bowman set the program’s single-season record for innings by a reliever, as well as being the first full-time reliever to win the Sun Belt ERA title since 2014.

Since graduating, Bowman has continued to play the game he loves, and he gets to do it while putting his passport to use as well.

After graduation, Bowman knew he didn’t want to give up baseball, so he reached out to a friend who played baseball internationally. This friend directed him to join an online group called Baseball Jobs Overseas.

“Within an hour of my profile being up, I had over 10 teams reach out to me from mainly all over Europe and Canada,” Bowman said. “I put the profile up early June, and my sister was getting married in mid-June. I went to my sister’s wedding and then the next day, I flew up to New Brunswick, Canada.”

Bowman joined the Fredericton Royals in the middle of the Canadian season and as a starter, helped lead his team to the championship series, before losing in the final game.

Bowman returned to the United States for six days before continuing his post-college career with the Greater Brisbane League in Australia. There, he set a single-season record with 160 strikeouts. After the conclusion of his first season in Australia, Bowman signed with the Melbourne Aces before COVID hit in 2020.

“I was supposed to go back in October, but Australia shut down the border to Americans,” Bowman said.

While he waits for the opportunity to further his career in Australia, Bowman decided to sign with Guggenberger Legionäre in Regensburg, Germany. He plans to join the team this March as a starter.

Bowman has never been to Europe, but says that the opportunity to play in Germany was a blessing during a difficult time.

“I was just in a hard spot in my life with COVID and not traveling. I was at the point where it was like, ‘do I want to keep playing?’” Bowman said.

Bowman found job opportunities in the United States, but was still hoping to continue playing internationally.

“This kind of just fell into my lap,” he said. “This team reached out to me, and it’s probably one of the best teams in Germany and one of the professional leagues in Europe, and I wanted to play at the highest level, that was important for me.”

Bowman said that within 12 hours of talking to Guggenberger Legionäre, they had a contract laid out for him and he signed the next morning.

During the offseason, Bowman is just as busy. He’s learning German and helps teach younger generations the game he loves. He also manages a baseball facility in Northern Virginia, where he is originally from.

“We do stuff like lessons and camps, but we have been hosting distance learning since school has been out,” he said.

The children come into the facility around 7 in the morning and during the day, the coaches assist the kids with computer setup, and answer questions. Bowman said they also get to help with the “fun stuff,” which is lunch and recess.

He credits his former head coach at App, Kermit Smith, with helping him become the person he is today.

The success Bowman has achieved post-college does not come as a surprise to his former coaches at App, and it wasn’t just because of the talent he showed on the mound.

“He’s extremely passionate about life,” Smith said. “He’s an incredible student, an incredible worker. He, of course, possessed some talent on the mound, but his desire and work ethic is what took those skills and allowed him to be elite.”

His former pitching coach, Justin Aspegren, had nothing but the highest praises for Bowman.

“He was a clutch player and a go-to player. I think when he pitched, everyone was pretty confident that things were probably going to go our way,” Aspegren said.

He also said that Bowman usually played in crunch time, proving the trust the team had in him to get the job done.

“The fact that a guy would be an ERA qualifier as a bullpen arm lets you know his willingness to go put himself out for the team,” Aspegren said.

Bowman said that of course, he would love to play professionally in the United States at some point in his career, but he is happy playing overseas. He’s also in the process of getting permanent residency in Australia.

“After 30 (years old), you can’t get a visa in Australia, so with a permanent residency, I wouldn’t have to worry about that. The goal eventually is six months out there and six months here,” he said.