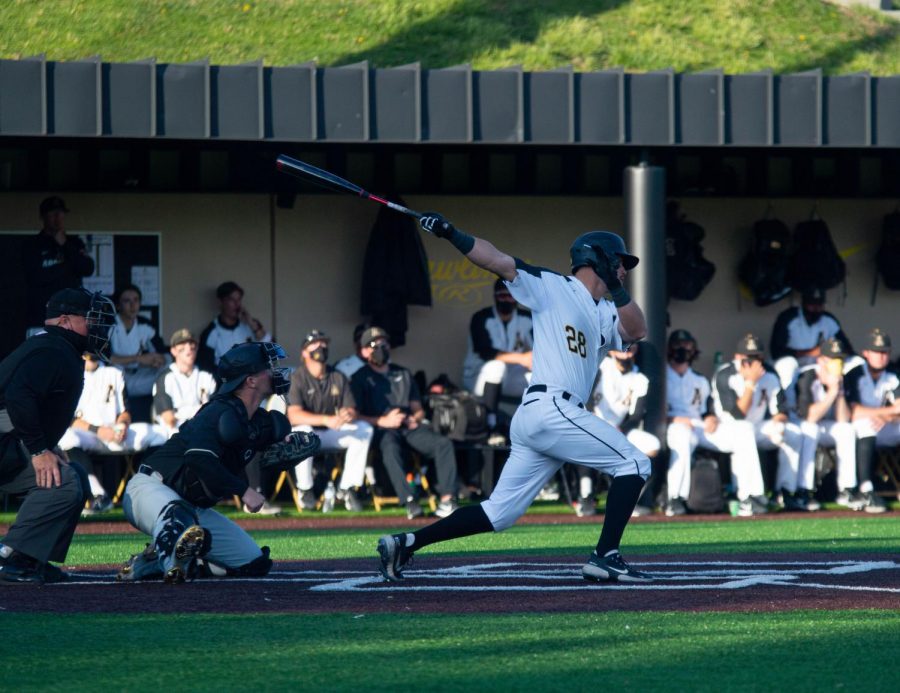 App State super senior infielder Robbie Young follows through on a swing against Wake Forest April 13 in Boone. Young has started all 28 games this year for the Mountaineers and ranks third on the team with a .289 batting average.

On March 30, App State baseball lost to Wake Forest on the road 15-7, and were poised for their second matchup of the season in Boone. Things didn’t go as planned as the Demon Deacons shut out the Mountaineers 12-0 April 13.

During the first 4.1 innings, App State’s defense was efficient, only giving up two runs on solo homers and keeping Wake’s offense at bay. Sophomore Trey Tujetsch started for the Mountaineers and threw six strikeouts during those first 4.1 innings before junior AJ Stinson took over.

“I thought (Tujetsch) did a fantastic job. I think resilience is a really good word to use. Especially when you give up a home run for the first run of the game, first hit of the game, and they pop another one,” head coach Kermit Smith said. “I thought his reaction and his attitude towards the next situation was phenomenal and that’s what it takes to be a good starter.”

With two runners on in the third inning, the App State defense executed a double play on a groundout to shortstop. Tujetsch rang up the next batter on strikes to get out of the inning.

Stinson came into the game with two runners on and one out in the fourth and ended up walking three straight batters, including walking in two runs for Wake Forest. Smith quickly decided to bring in junior Austin Primm to finish the inning.

After a grand slam, Primm rallied and got the Mountaineers out of the inning after giving up seven runs. App State notably only gave up two runs in seven innings, with ten coming in two innings.

“You’ve got eight innings of clean baseball, so you’ve got to be proud of your defense from that standpoint. A lot of guys got out there and got some opportunities tonight,” Smith said. “They played a lot better than we did, credit goes to Wake Forest.”

After the tough loss, the Mountaineers travel to play Lipscomb in a three-game series April 16-18.

“I think we’ve been pretty good on the weekends to be honest with you, and I don’t think that switches, these guys have that stuff figured out,” Smith said. “We’ll get back to our normal routine, get back to it, and go get ready to beat Lipscomb.”