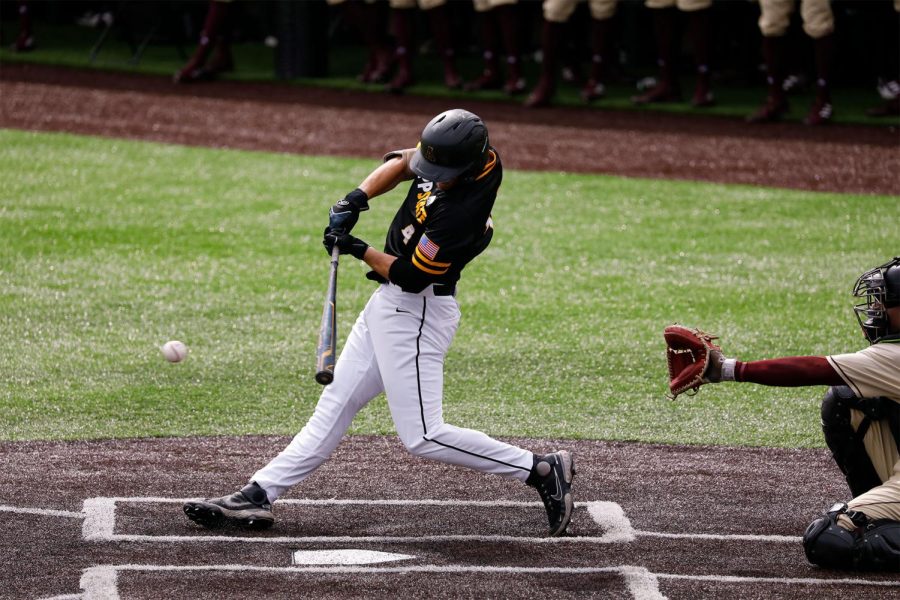 Junior infielder Luke Drumheller swings on a pitch against No. 20 Texas State April 2, 2022.

In the first matchup Friday night, the Mountaineers struggled to get going. They allowed five runs from the Jaguars in the first two innings, including a two-run home run in the bottom of the second.

The Mountaineers only managed to get four hits throughout the contest and failed to get on the scoreboard, getting shutout 9-0.

Saturday’s game was a closer match during the early innings with the teams going back and forth. The Jaguars struck first in the bottom of the second thanks to a one-shot home run. The Black and Gold responded in the top of the third when junior infielder Alex Aguila hit a triple, allowing junior Andrew Terrell to cross home plate.

The Mountaineers had an opportunity to get back into the game in the top of the ninth but came up short, losing 6-2.

The final game in the series was similar to the first matchup. The team wrapped with only three total hits and three errors. After not scoring in the first inning, South Alabama responded with a three-run second inning. The Jaguars kept their foot on the gas and shut out the Mountaineers for the second time in three days, 9-0.

App State drops to 10-19 on the season and 3-9 in conference play. It currently finds itself second to last in conference standings, leading only a winless Arkansas State. The team lost six games in a row in a season where expectations were high for this group of Mountaineers.

Over the losing streak, App State has been outscored 44-10, with two shutouts. As a team, the Mountaineers only hit above .200 once. Pitching has been a sore spot the whole season and over the last six games, an ERA of over six has been allowed. However, the cause for concern is the little time left to turn the season around with games against Wake Forest, Davidson and Sun Belt conference-leading Georgia State still on the schedule.

App State will play against High Point University Tuesday at 6 p.m. in Boone. ESPN+ will stream the game.