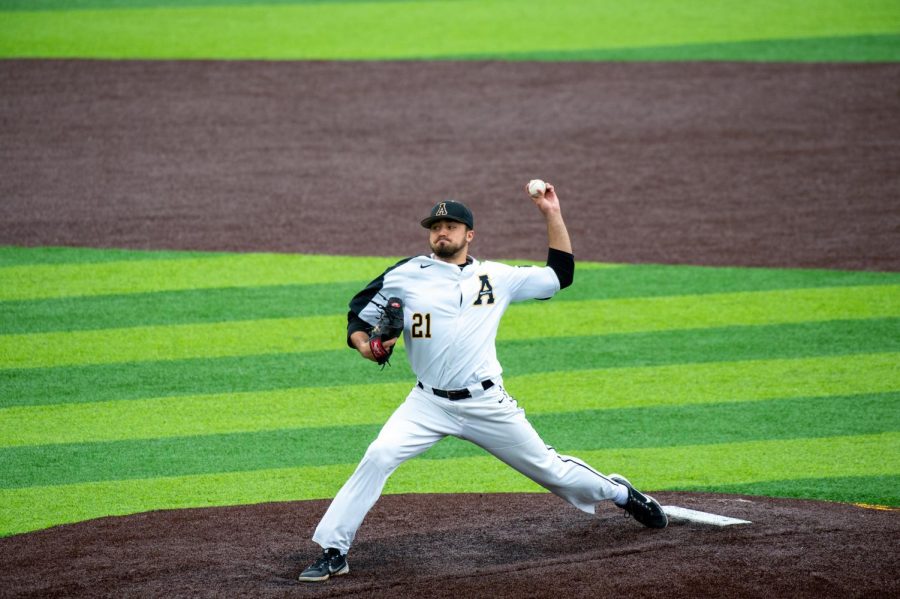 App State junior lefty Tyler Tuthill picked up his first win of the season in the Mountaineers' home opening 6-2 win over NC A&T Saturday in Boone. Tuthill allowed two runs off three hits over seven innings while striking out three in the victory.

The App State baseball team moved to 6-2 on the young season by taking three out of four games against North Carolina A&T from Feb. 27-March 2.

The Mountaineers began the series by hosting a doubleheader on Saturday. The series was originally scheduled to begin on Friday with another game Saturday, but due to inclement weather, the first game was pushed back.

App State began the series on a positive note, sweeping the visiting Aggies on Saturday’s doubleheader, winning the first game 6-2 and the second 7-6. After winning the first two games of the series in Boone, App State headed down the mountain to Greensboro to look to take a 3-0 series lead.

In the first game of the series, the Mountaineers collected 17 hits as junior left-handed pitcher Tyler Tuthill collected his first win of the season. The Apps were led at the plate by senior infielder Luke Drumheller, who went 3-for-5 in game one with an RBI. App State had six batters drive-in runs on a very productive day at the plate.

Game two resulted in a lot of the same, as NC A&T jumped on App State senior lefty Quinton Martinez early in the first inning for 3 runs. The Aggies then plated two more runs in the top of the fourth, before the Mountaineers answered with five runs in the bottom half of the inning to tie the game at 5 on a three-run-double from Drumheller. Then, App State added two more runs in the 4th inning and held on to win 7-6. Martinez picked up his second win of the season.

App State head coach Kermit Smith had nothing but praise for his team after sweeping the doubleheader Saturday.

“We’ve been forced to already play two doubleheaders this early in our season, and to go out and win all four of those games is very difficult to do, especially when you are playing a quality opponent like A&T,” Smith said.

The Apps welcomed family members of players into Jim and Bettie Smith Stadium. Although the game did not allow fans that were not family, the Mountaineers still took advantage of the 150 people in attendance.

“It was nice to have the App family here to support us, they did a good job at helping us keep the momentum going throughout the day,” said Smith.

Game three took a turn for the worse for App State as they fell on the road for their second loss of the year by a score of 11-3.

The Aggies opened the game hot for the second time in a row, jumping on App State redshirt junior starting pitcher Cole Hooper for six runs in the top of the first. After grabbing the lead in the first, A&T never looked back.

Senior first baseman Robbie Young led the Mountaineers in game three, going 3-for-4 on the day with a 2-run-homerun, his first since 2019. A&T scored 11 runs on 13 hits while the Mountaineers were only able to score 3 runs on seven hits.

App State finished the series off on Tuesday with a win, taking the series 3-1. Andrew Terrell pitched two innings  and scored four runs scored at the plate.

Tuesday’s game was a “rotation” day for both teams, meaning they’d both utilize their bullpens very heavily for game four. App State had more success with their bullpen than A&T did.

In-game four, junior utility man and pitcher Andrew Terrell proved as vital as he was dominant both on the bump pitching and at the plate hitting for App. He pitched two scoreless innings and also crossed the plate four times on offense. He struck out five of the seven batters he faced. The Apps were led offensively again by Drumheller, who went 2-for-5 on the day with another RBI.

Next up, the Mountaineers prepare to hit the road to Greenville to take on the No. 17-ranked East Carolina Pirates in a three-game series at Clark-LeClair Stadium March 5-7.