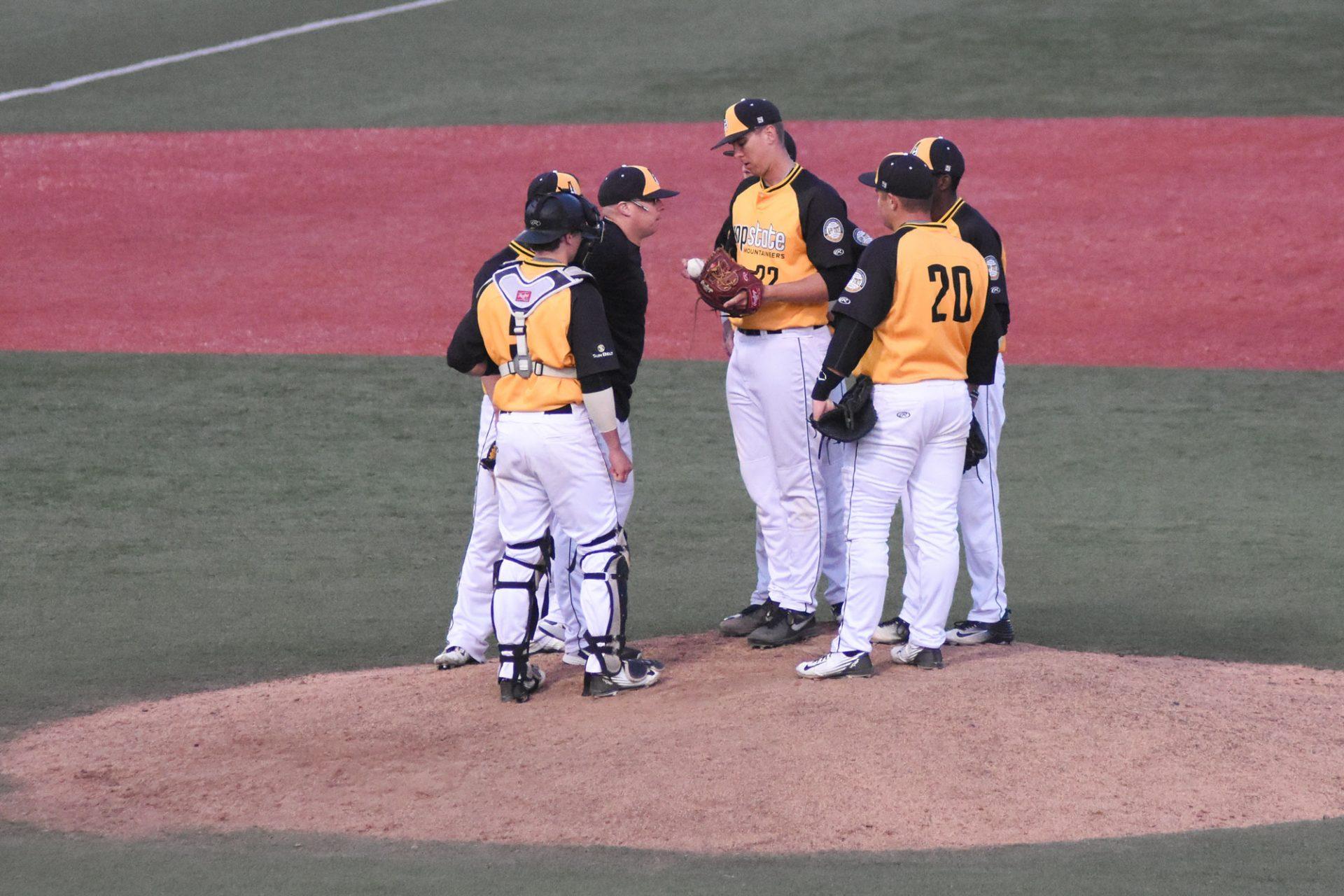 The 2016 App State baseball team discussing the next play during a time out.

Spring is right around the corner and that means Appalachian State University’s baseball team is gearing up for their sophomore season under head coach Kermit Smith.

Smith will lead a team consisting of 18 new players, nine freshmen and nine transfer players, eight of which are from the junior college level. There will also be 13 returning players, six of which are seniors.

In his debut season as the head coach for the Mountaineers, Smith and his team finished with an overall record of 19-36, including a 8-22 record in Sun Belt play. With new additions and returning players alike, the team will look to improve this record and start a culture change in Boone.

App State currently sits at 5-12 overall, losing three straight conference games against Texas State in an away series. Despite an inconsistent offense and problems finishing games, the Mountaineers have managed to avoid being swept in every series, except for their three-game series at Elon University.

Some of the biggest issues facing the team this season will be similar to those of last season. Issues generating consistent offense and a lack of depth in the bullpen forces the arguably underrated defense to consistently try and save the day.

Freshman outfielder Kendall McGowan leads the team in batting average with a .297, while juniors, catcher Riley Smith and third baseman Drew Beck lead the team in RBIs with ten apiece.

If the Mountaineers want to reach their goals and post an improved record from the previous season, hitting will need to become a more prominent part of their game.  They have been shut out three times so far this season, twice against Elon and once against Wilmington.

Aside from offensive struggles, depth in the bullpen is another issue that Coach Smith will need to improve upon for his team to compete at the level he strives for.

Freshman pitcher Will Sprinkle leads the pitching staff with a 2.25 ERA(earned run average) and six strikeouts in three appearances. He is followed closely by junior pitcher Colin Schmid with a 2.30 ERA, and redshirt senior Luke Watts, 3.27 ERA.

App State is very heavily staffed with right-handed pitchers, with only four of the 14 active pitchers being left-handed. Underclassmen like Sprinkle and freshman Cameron Kepley are showing great promise as up-and-coming regulars for the pitching rotation but have only played a few games, leaving their consistency still to be determined.

Senior leaders and transfer players alike will need to step up and improve on their current pitching if the Mountaineers hope to get out of this three-game losing streak.

If there is a saving grace to this rebuilding phase, it would have to be the defense. App State’s defense has been there to save multiple big plays in the few games they have played.

Multiple fielders for the Mountaineers currently have a perfect 1.000 fielding percentage, which is the number of putouts and assists divided by errors committed. Redshirt sophomore outfielder Beau Myers currently has 21 putouts with a single assist. Senior first baseman Conner Leonard also has some impressive stats, posting 123 putouts and 12 assists with a .993 fielding percentage.

Despite the problems the team is experiencing, it is important to remember that they are currently in a rebuilding phase. With a new head coach and a roster half full with brand new players, App State has some holes to fill before they will be considered contenders in one of the most competitive conferences in college baseball.

The pieces are set in motion, and there is a lot of promise on the horizon. Baseball requires planning and player development, something that cannot be achieved in only one season. With patience and support from the Mountaineer faithful, this team could easily surprise everyone and make some serious noise in the upcoming seasons.