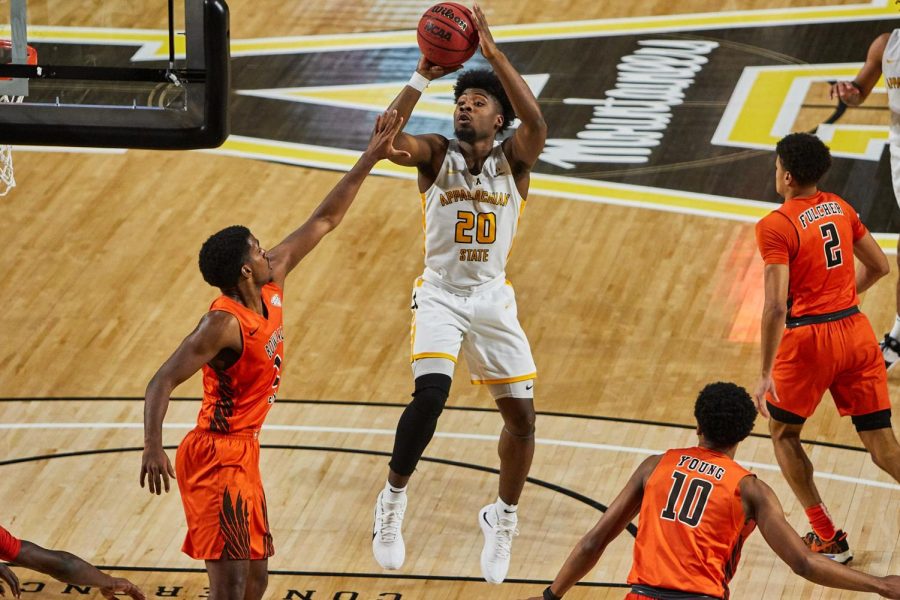 App State junior guard Adrain Delph pulls up against Bowling Green Nov. 30. Delph tied his career-high with 21 points against Charlotte on Friday, including the game winning step back three-pointer.

App State went on the road and beat Charlotte by four on Friday, after being down 33-24 at halftime. The game was nationally televised on ESPNU.

Junior guard Adrian Delph led the Mountaineers with a career-high tying 21 points while shooting over 50% from the field, but the App State defense was the story of the night.

The Mountaineers totaled ten blocks in the game, all coming before the 15-minute mark in the second half. This was a season high for the defense, with freshman forward CJ Huntley and redshirt junior James Lewis Jr. both finishing with three apiece.

The 49ers got off to a hot start, shooting 6-of-11 from behind the arc in the first half. Jahmir Young led the 49ers in scoring with 24, including 11 of Charlotte’s 24 points in the second half.

The Mountaineers shot 0-of-9 from three in the first half while the 49ers’ stellar shooting gave them a nine-point lead.

Senior guard and preseason first team all-Sun Belt selection Justin Forrest went up for a layup with 5:37 left in the first half and was met by two defenders, taking a hard fall headfirst into the floor. Trainers had to check Forrest out, and he returned to the sideline with head coach Dustin Kerns’ help. Forrest did not come back to the floor in the second half and his status for Tuesday’s matchup at No. 12 Tennessee is unknown.

After being down 33-24 at half, the Mountaineers made adjustments on offense that helped them take the lead.

Sophomore guard Kendall Lewis led the team in free throws, getting to the line four times and shooting 6-of-8. Lewis put together a strong game with 15 points and seven rebounds.

Following a costly turnover by Charlotte with 44 seconds left, the Mountaineers had the ball with a one-point lead and a chance to put the game away.

With the shot clock running down, Delph knocked down a fadeaway three from the top of the key as the shot-clock buzzer went off, taking a four-point lead with 15 seconds left and sealing the game.

The Mountaineers’ bench celebration as the final seconds ticked down filled the arena as App State moved to 4-1 on the season and looked towards their toughest opponent of the season.

App State’s next game is Dec. 15 against the 12th-ranked Volunteers of the University of Tennessee. The game starts at 7:00 pm and will air on SEC Network.