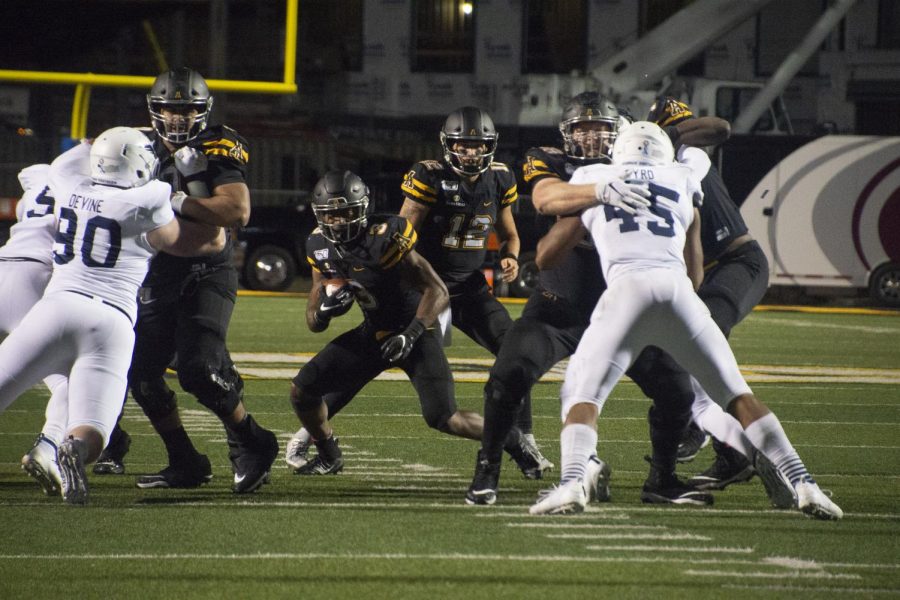 Junior running back Darrynton Evans attempts to hit a gap in App State’s 24-21 loss against Georgia Southern on Oct. 31.

The Mountaineers undefeated season came to an end on Thursday when they lost to rival Georgia Southern 24-21 at home.

App State started out slowly, scoring only 7 points before the start of the 4th quarter. A couple of big touchdown runs from Southern quarterback Shai Werts and running back Wesley Kennedy broke the game open for the Eagles and gave them a 24-7 lead that they never gave up.


“That’s just not winning football, we’ve got to be better than that,” head coach Eli Drinkwitz said.

The Mountaineers outgained the Eagles by over 75 yards but it was the Eagles ability to convert and create big plays that made the difference. Southern averaged almost a yard more gained per play than App State.

“It’s tough right now, losing the way we lost and feeling like we could have played a whole lot better,” senior safety Josh Thomas said. “We’re going to bounce back, we’re going to be fine. We just have to move on.”

With the loss, the Mountaineers fall to 7-1 overall and 4-1 in Sun Belt play. They still sit alone at the top of the Sun Belt East division with three conference games left to play, including matchups with division foes Troy and Georgia State.

“You just got to stay positive,” junior quarterback Zac Thomas said. “Obviously you hate the outcome of that game but I think there’s a lot of stuff to learn from.”