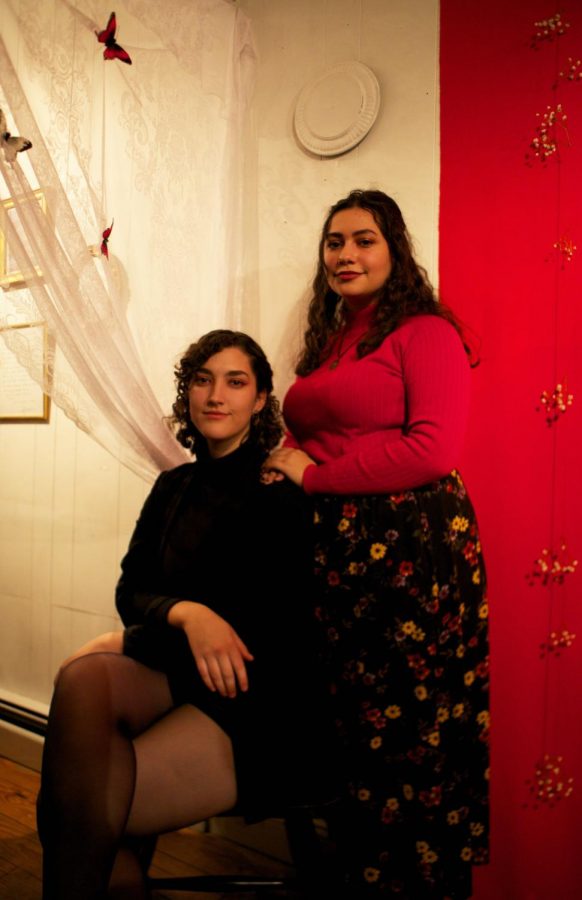 Grace Puffer (left) and Sarah Devoti (right) are both sophomore commercial phorography students. The pair created their own art show, "For Your Love" focusing on feminity, vulnerability and self-worth.

While most students have settled in for another semester at App State, Sarah Devoti and Grace Puffer embarked on unfamiliar territory as they returned to Boone last month: creating and organizing an independent art show.

Devoti and Puffer, both sophomore commercial photography majors, have worked for three months on an exhibit they call “For Your Love,” an exploration into femininity, vulnerability and self-worth.

The small viewing space of 3rd Place was brimming with attendees as Boone’s First Friday Art Crawl was in full swing.

The pair transformed 3rd Place into an intimate showroom of their visceral artwork. Their photographs were delicately displayed in vintage frames and vases of roses and baby’s breath decorated almost every surface.

“Sarah and I have known each other since first semester of freshman year, and we work together really well,” Puffer said. “I always thought our art complemented each other.”

When they decided to collaborate on the show, they said their visions for what it would look like quickly came together.

“It started with an idea that I had of artistically photographing the way women feel they have to modify themselves for men, like shaving, painting your nails, doing your hair,” Devoti said. “I got inspiration from that and I immediately thought of the title, ‘For Your Love.’”

The two photographers had unique interpretations of this concept, reflected in their different compositional elements, use of color and choice of subjects in their images.

Devoti centered her work around the celebration of organic beauty, the characteristics her female subjects possessed without manipulation.

Puffer’s work took another approach to “For Your Love.” Many of her photographs were self-portraits featuring graphic elements that expressed an introspective battle with vulnerability.

Apart from the show’s message, Devoti and Puffer said they were also motivated to branch out from the conventions of commercial photography into fine art photography.

“There’s a huge dichotomy in the commercial photography department that a lot of what our professors want us to make is purely commercial, which makes sense, but a lot of what we want to do is fine art stuff,” Puffer said.

“We’re both interested in other kinds of art forms, and a show is a great way to kind of bundle everything together and just make it us,” Devoti said. “It can be whatever we want it to be because we’re in control.”

Devoti and Puffer said they felt “For Your Love” was a way to escape the critique that takes place in their photography classes and the feedback they receive from posting their work on social media.

“It’s going to be this fun environment that’s carefree, where you don’t have to worry about likes or comments or critiques,” Devoti said. “We did this, and we’re finally sharing it and that’s it, that’s the beauty of it.”