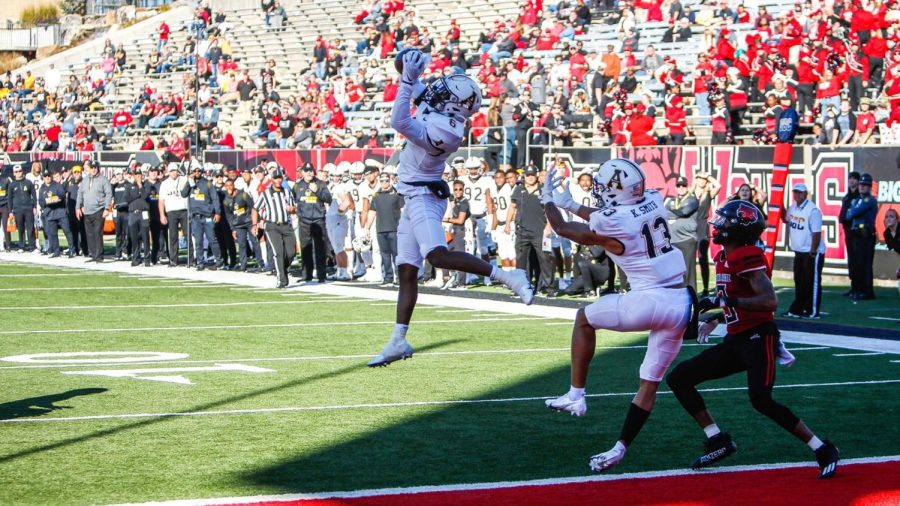 App State traveled to Jonesboro, Arkansas Saturday and defeated the Arkansas State Red Wolves 48-14, improving its record to 7-2 on the season and 4-1 in conference play.

This is the Mountaineers’ fourth time this season scoring over 40 points and seventh time producing over 400 total yards offensively, with five of those games exceeding 500 yards.

“I’m very proud of our football team to come on the road and get a big win against Arkansas State,” head coach Shawn Clark said. “We started fast, had a little lull there in the middle, but we finished strong.”

The Mountaineers got off to an early lead, with a trick play that involved super senior wide receiver Malik Williams throwing to a wide-open super senior wide receiver Thomas Hennigan in the end zone to open the scoring at 7-0. Moments later, Arkansas State quarterback Layne Hatcher threw an interception to senior defensive back Steven Jones Jr., who returned it to the end zone to extend the lead to 14-0.

“I was just focused on doing my job,” Jones Jr. said. “Staying on top, looking at the formation. From watching film, I knew a couple plays.”

The Red Wolves wouldn’t shy away from the challenge early on, though, scoring just 42 seconds into the second quarter. After an interception from graduate transfer quarterback Chase Brice, the Red Wolves tied the game 14-14 with 10:18 remaining in the half.

App State dominated the remainder of the game. The Mountaineers cruised 69 yards down the field, topped off with a Nate Noel touchdown down the sideline with 7:02 remaining in the second quarter.

To end the half, super senior kicker Chandler Staton knocked in a 33-yard field goal.

“Anytime I can go out there and put some points up on the board, I’m happy,” Staton said. “We had a couple opportunities earlier, and we decided to go for it. So, actually going out there and kicking a field goal in the game was really nice, and I always enjoy that.”

Staton was named a semi-finalist for the Lou Gouza Collegiate Place-Kicker Award Nov. 4, which recognizes the best kicker in the country, according to Palm Beach County Sports Commission. Staton also remains perfect on the season, knocking in 14 field goals and 32 extra points, the best field goal and extra point percentage in the Sun Belt. Staton also set the school record for most consecutive field goals with 16, dating back to last year.

“Staton had a rough season last year, and he really wanted to prove to himself and to his team that he’s the kicker we thought he was,” Clark said. “We have a lot of confidence in Chandler., Hhe’s kicking at a high level, and very proud of him and the effort he’s put into this season.”

The Mountaineers opened the second half with a touchdown catch by junior tight end Miller Gibbs, his second of the season. Later in the quarter, junior running back Cam Peoples took it 27 yards to the house for his 12th touchdown of the season, extending the lead to 38-14 heading into the fourth quarter and putting Peoples at ninth in the country for most rushing touchdowns on the season.

In the fourth quarter, Staton added another field goal, and Jones Jr. caught another interception resulting in a touchdown. The Mountaineers finished with 48 points and defeated Arkansas State 48-14.

Peoples and Noel both tallied over 100 rushing yards, both scoring a touchdown as well. Brice finished the day with 163 yards on a 58% completion and a touchdown.

“A lot of credit goes to the offensive line, but today, I think a lot of the credit needs to go to the tight ends and wide receivers,” Clark said. “The offensive line blocks for first downs, receivers and tight ends block for touchdowns. Those running backs were really hitting the ball hard and getting that two or three extra yards that we needed.”

The Mountaineers have three more regular season games, two home and one away. South Alabama travels to Boone Nov. 13 taking on the Mountaineers at 2:30 p.m. EST.