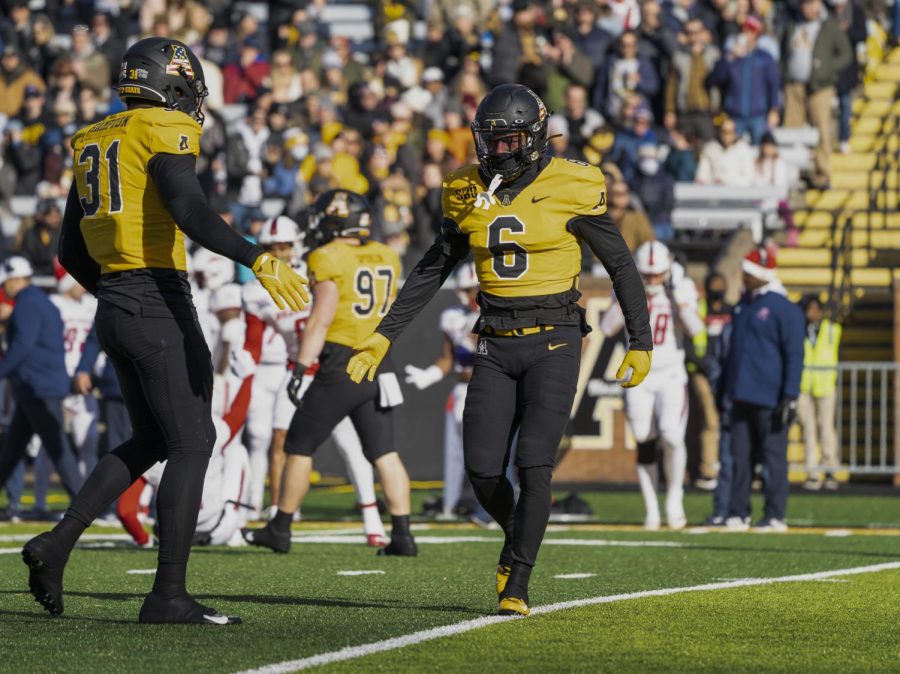 One cornerback wrote his name into the record books this season.

On Nov. 6 against Arkansas State, senior cornerback Steven Jones Jr. came away with three interceptions and two pick-sixes, which tied the App State record for both categories.

His performance earned Jones Jr. a Sun Belt Defensive Player of the Week award in addition to the Walter Camp and Bronco Nagurski awards, which are given to the national defensive player of the week.

“I just went out there, executed and did what I had to do,” Jones Jr. said.

Jones Jr.’s Arkansas State game gave him four career pick-sixes, which tie him with the all-time Sun Belt record. At five interceptions for the season, Jones Jr. is tied for the second-most interceptions in the nation.

Despite currently being a successful cornerback, Jones Jr. started his App State career primarily playing special teams. During his sophomore season in 2018, Jones Jr. produced a sensational special team’s performance against Garner-Webb that rivaled his game against Arkansas State. Jones Jr. blocked two punts and recovered one in the endzone for a touchdown. Tying the App State record for punt blocks in one game led to Jones Jr. earning that week’s Sun Belt Special Teams Player of the Week.

Jones Jr. would go on to play in every game in 2019 and 2020, following his special teams’ success. In 2020, Jones Jr. had two interceptions and made the most out of both of them. One was a pick-six against Troy, and the other was a 63-yard interception return against North Texas at the Myrtle Beach Bowl. Jones Jr. credits his work ethic for helping him blossom into a quality starter.

“I just had to come to work every day. I had to play my role and do what I had to do on special teams, and now I’m the guy,” Jones Jr. said.

“Oh, it’s great to have the fans back out there whenever we make plays. We need them a lot on third down, especially when we are at home to get the crowd loud and mess up the offense,” Jones Jr. said.

Jones Jr. was one of nine Mountaineers this season to be named first team All-Sun Belt. The national spotlight shined down on him, and he earned All-American awards from Walter Camp, the Cotton Bowl, Phil Steele and Pro Football Network. He will return next season to try to build on his breakout year. Head coach Shawn Clark feels like Jones Jr., along with the other returning players, could lead the Mountaineers to a lot of team success next season.

“Those are guys that have the experience to be great leaders for us,” Clark said. “They want to be here, and we want them here.”