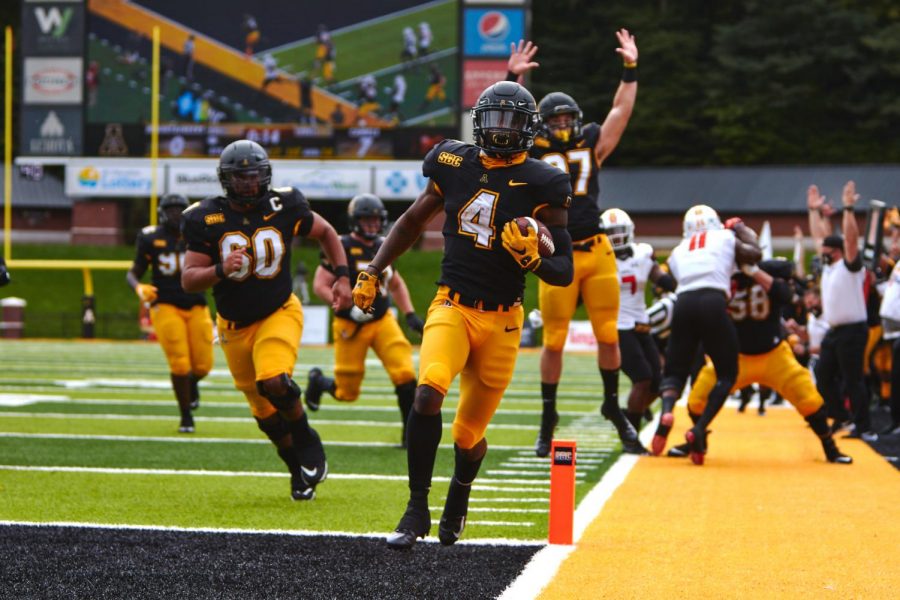 App State senior running back Daetrich Harrington rushed for 211 yards and 4 touchdowns during the Mountaineers 52-21 win over Campbell Sept. 26. He became the first Mountaineer to rush for 4 TD's in a game since Armanti Edwards in 2009.

Head Coach Shawn Clark said the Mountaineers were without “20-plus” players and four coaches after they learned on Wednesday that there were three active COVID-19 cases on the football team. Running backs Marcus Williams Jr. and Camerun Peoples and receivers Malik Williams and Jalen Virgil were among the key players out.

“It’s been a long week, guys. We found out on Wednesday at 1:38 (p.m.) that we had guys in quarantine,” head coach Shawn Clark said. “I’m very proud of our program and our players. They’re resilient. That’s why we’re such a great program.”

Depth issues at many positions forced the Mountaineers to move multiple defensive players to offense. Freshman Anderson Castle, listed as an outside linebacker, played running back, and redshirt freshman Milan Tucker, listed as a defensive back, played wide receiver.

“We had four receivers today. Four,” Clark said. “Wednesday in the team meeting … I made the executive decision to put Milan Tucker to receiver. Same thing with Anderson Castle. They really stepped up to help us get this win today.”

App State won the initial coin toss and deferred possession to the second half. Each team opened with a quick three-and-out, followed by a near eight-minute, 83-yard scoring drive by Campbell. Sophomore quarterback Hajj-Malik Williams capped off the drive with a one-yard rushing touchdown to put the Fighting Camels up 7-0.

Allowing its opponent to score first is nothing new to the Mountaineers. In 11 of its last 15 games, App State’s opponents scored first. However, the Mountaineers have only lost two of those 15 games.

App State came right back with an 82-yard touchdown drive. Senior running back Daetrich Harrington capped off the drive with his first touchdown of the day.

The two teams traded blows through the second quarter, featuring the Fighting Camels’ Williams rushing for his second touchdown of the day, and Harrington ending the half with his second rushing touchdown.

“We knew that if we were going to win this football game we had to put it in the hands of our offensive line and our running back,” Clark said. “They told me ‘Coach, run the ball and we’ll win.’”

The Mountaineers entered halftime with a 17-13 lead.

App State’s opening drive of the second half lasted just four minutes thanks to a 40-yard touchdown sprint from Harrington. The Douglasville, Georgia native finished the day with four rushing touchdowns, the first Mountaineer to do so since Armanti Edwards in 2009 at Furman.

“It feels good to be in the same sentence as (Edwards) because I know he was a legend here,” Harrington said. “This is something I always dreamed about. It’s a blessing to actually make it happen.”

“I tell them before the game that I don’t think anybody compares to us as far as a secondary goes,” senior safety Kaiden Smith said. “I feel like as long as we communicate on the backend, nobody can really see us in that department.”

The offense capitalized on every opportunity the defense provided in the second half, scoring touchdowns on every drive before running out the clock on the final possession, getting back in the win column after a 17-7 loss at Marshall Sept. 17.

“I think it’s what we needed as a team to bounce back from last week,” senior quarterback Zac Thomas said. “I think everything clicked today and we started playing like we should have been playing all year.”

Thomas rushed for a six-yard touchdown of his own, one of seven total rushing touchdowns on the day for App State.

With two top running backs down, true freshman Nate Noel made his collegiate debut as Harrington’s backup. The speedy back took 14 carries for 131 yards and one touchdown.

“He came out here and played his heart out. He did what he was told and he hit the holes like he was supposed to,” Thomas said. “I’m proud of him and proud of the way he was fighting adversity.”

Noel wasn’t the only young player to get significant playing time against the Fighting Camels. Freshman Jalen McLeod started at outside linebacker and contributed four total tackles, one sack and one forced fumble. Fellow freshman Dashaun Davis hauled in all six of his targets at receiver for 40 yards.

“We keep those guys up and we let them know they’re here for a reason.” Smith said. “We constantly tell them that we trust them and to … play the way that got them here.”

Senior quarterback Jacob Huesman finished the game off with an eight-yard touchdown rush, and the Mountaineers moved to 2-1.

Thomas attempted 18 passes and completed 12 of them for 131 yards. Thomas and his offense committed zero turnovers all game.

Kaiden Smith led the defense with seven total tackles, followed by four Mountaineers with five each.

The highly-touted Mountaineer offensive line allowed one sack on the first possession of the game, and none in the final 57 minutes. Their blocking allowed multiple Mountaineers to have career days on the ground, and App State finished with 404 total rush yards.

“I love them boys for what they allowed me to do today, and allowed Nate (Noel) to do today,” Harrington said. “I can’t thank them enough. They showed up and showed out today.”

App State’s (2-1) next opponent is No. 19 Louisiana-Lafayette (3-0), and will go head-t0-head on Oct. 7 in Boone. The game will be broadcast on ESPN at 7:30 p.m., and will be the first game in Kidd Brewer this season to allow limited fan capacity.