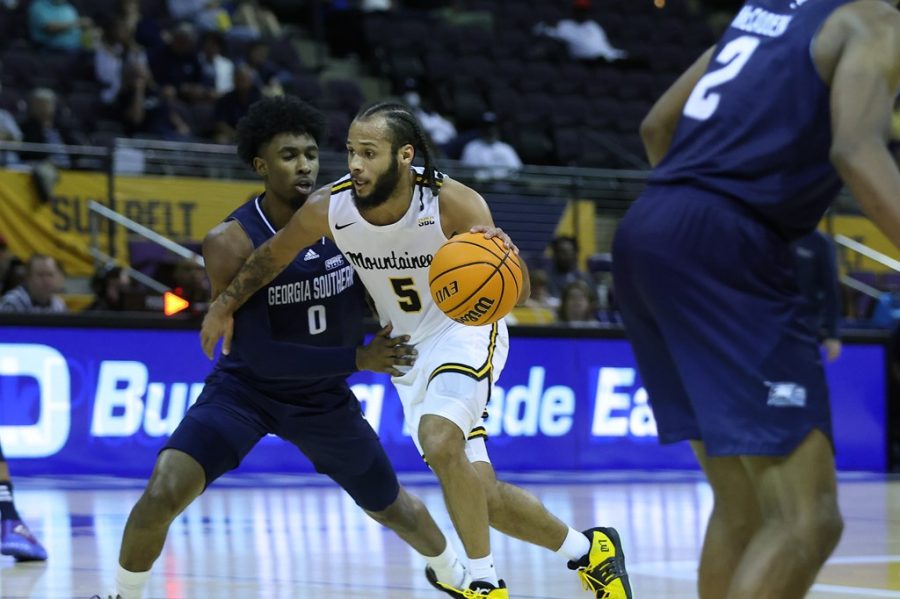 App State men’s basketball traveled to Pensacola, Florida, March 5 to compete in the Sun Belt Tournament, an event it won in 2021. The second-seeded Mountaineers opened the tournament with a 73-60 victory in the quarterfinals over the 10th-seeded Georgia Southern Eagles.

“It was a great team win against a good team,” said head coach Dustin Kerns. “As we’ve already seen in this tournament, every game is really tough.”

App State hadn’t played a game since Feb. 25 when it lost to Arkansas State in its final regular season game, eight days before its first conference tournament game. The Mountaineers were also the last team to play its first Sun Belt Tournament game.

“We were ready to go all week,” said senior guard Justin Forrest. “It’s been a long week, but it was good for us. We were able to get our rest.”

The Mountaineers got off to a hot start, leading 10-0 just under four minutes into the game. App State didn’t slow down in the first half and led the Eagles 37-25. Forrest scored 14 points, 12 of those coming on three-pointers. Graduate student guard Michael Almonacy piled on seven points, and the Mountaineers had six players with points heading into the half.

“Our guys came out and really wanted to show something,” Kerns said. “They’ve been here, and I thought our guys were really fired up to play.”

In the second half, Georgia Southern cut the lead to six points with just over 13 minutes left. A three-pointer by sophomore guard Michael Eads Jr. extended the lead to nine, starting a dominating second half from the Mountaineers. App State won the game 73-60 and advanced to the semifinals of the Sun Belt Tournament.

The Mountaineers had four players score in double digits: Forrest, Almonacy, senior guard Adrian Delph and junior forward Donovan Gregory. App State was without sophomore forward CJ Huntley for much of the game after he was injured seven minutes in. Huntley missed the remainder of the tournament.

“Any team is hard to beat once in this league,” Kerns said. “Look at how the tournament has gone. There have been upsets already. This is a deep league filled with great teams, great coaches and great players. It’s difficult beating a team once, let alone twice, let alone three times, but credit goes to our players.”

The Mountaineers advanced to the tournament semifinals with the 13-point victory over the Eagles.

App State faced Georgia State March 6 in a rematch of the 2020-21 Sun Belt Championship game, this time with a title game berth against the University of Louisiana on the line.

The matchup proved to be a shootout between Delph and Georgia State’s Corey Allen. The two combined for a total of 54 points, Delph scoring 25 and Allen scoring 29.

The game featured 13 lead changes, all coming in the first half. App State took its last lead at the 4:12 mark following a three-pointer by Delph, making the score 29-27. Georgia State answered with an 11-0 run to finish the half, punctuated by a buzzer-beating three by Allen to head into the break.

The second half went Georgia State’s way as they expanded their lead by 13 points. With just under nine minutes remaining, the Panther lead was 12 points. The Black and Gold responded with three-straight three-pointers and added another following a Georgia State layup. The sequence narrowed the deficit to just two points before both teams went on scoring droughts of over two minutes.

Following the drought, Georgia State closed out the game by scoring 12 more, eight of which were free throws.

As a team, App State shot 40.4% from the field and an impressive 50% from behind the arc. Delph and Almonacy led the Mountaineers with 25 and 14 points, respectively. Junior forward RJ Duhart led the team with nine rebounds. Delph and Gregory both got into foul trouble, receiving four each.

Despite the loss, App State announced it would be competing in the Basketball Classic, a 32-team invitational tournament holding games on campuses of competing schools. The March 9 announcement marks the sixth time in school history the team will compete in the postseason and the first time it will do so in consecutive years.

App State will host at least one game, and the location of future rounds is partly determined by attendance. The Black and Gold will face USC Upstate at 6:30 p.m. Tuesday in the Holmes Convocation Center for the first round of the tournament. ESPN+ will broadcast the game live.