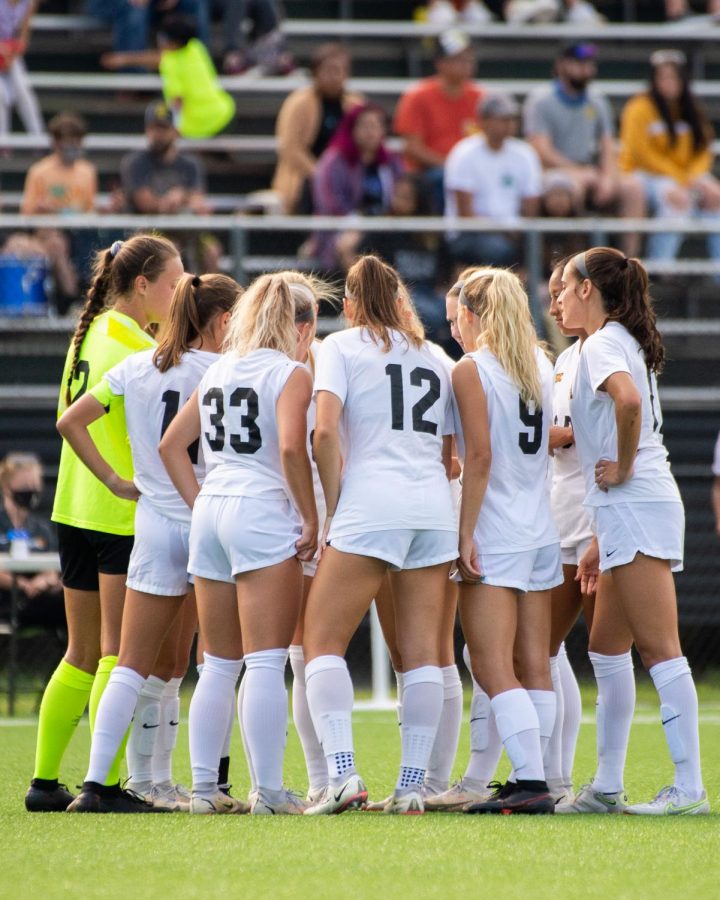 App State huddles up ahead of its matchup with Wake Forest. The 0-2 defeat mirrored the Mountaineers' last showdown with the Deacs, which was a two-score loss in Winston-Salem in 2019.

App State women’s soccer lost 2-0 against Wake Forest Sunday at the Ted Mackorell Soccer Complex, facing one of their strongest opponents of the season.

“You play these teams because your goal is to win the Sun Belt tournament, and once you do that, these are the teams you play, you can be prepared for that experience during the season,” head coach Sarah Strickland said. “They are a great team. They’re very athletic. They have a lot of things going for them, and as far as us being able to match up and compete is great for us.”

Wake Forest started the first half strong, nearly scoring four times within the first eight minutes. The Deacs had a shot inside the penalty area that was cleared off the goal line by junior center back and captain, Olivia Cohen.

App State nearly had a goal of its own in the 10th minute as freshman right winger Stephanie Barbosa drove down the right flank and crossed the ball into the box to freshman midfielder Addie Cooper who headed the ball out wide.

Wake Forest immediately responded by nicking the first goal of the game. Midfielder Sofia Rossi got through the Mountaineer defense and passed it down to Malaika Meena, who tapped the ball in the net.

The Deacs gained momentum after App State’s goal and dominated in possession. They doubled their lead off a play in the 33rd minute. Rossi used a heel flick from outside the box to pass the ball to forward Shayla Smart. Smart received the ball alone on goal and passed the ball down the right hand side to unmarked forward Jenna Menta who put the ball into the net.

App State had an explosive start to the second half, applying more pressure onto Wake Forest in their box. The Mountaineers were in possession of the ball in a 10-15 minute period but struggled to test the Wake Forest goalkeeper.

“After we settled down, I thought we competed well. I thought we were organized and pressed well as a unit,” Strickland said. “I thought when we did win the ball we were able to transition quickly and create some opportunities.”

The Mountaineers may have had more possession in this period, but Wake Forest also transitioned from defense to attack so smoothly they had a shot on goal nearly each counter.

The Mountaineers nearly scored at the end of the game off a freekick. Sophomore forward Breckyn Monteith dribbled past her marker on the right flank and was fouled right on the very edge of the penalty area. The Mountaineers’ freekick was deflected and a shot was taken on goal, but was saved off the line by the Wake Forest defense.

Junior goalkeeper Kerry Eagleston had one of her best performances ever in an App State jersey, securing 12 saves in the second half alone. Eagleston’s best save of the match came in the 68th minute off a counterattack. Wake Forest midfielder Malaika Meena outmuscled her defender and was one-on-one with Eagleston. The attacker thought she had her second goal of the night, but Eagleston effortlessly blocked the shot with her leg. The Ted Mackorell Soccer Complex was buzzing from Eagleston’s heroics of the night.

“We’ve been challenging Kerry to talk more and to challenge herself on her range more a little bit. I thought she did that tonight,” Strickland said. “Kerry stepped up and made some big saves throughout the game to help the team, as well as to give them confidence that they could take risks and go forward because she was prepared.”

App State records fall to 2-2-1 on the season as Wake Forest improves to 6-0-0. The Deacs set a new program record that night, securing six consecutive shutouts.

Eagleston, on the other hand, was on the verge of breaking her own record, securing a personal high of 20 saves on the night, one save short of tying the program record of 21 saves in a single game that was set by Kelley Guinn in 1995 against Davidson.

“It makes me want it even more,” Eagleston said. “Tonight showed us that we can come out here and compete even with teams on top of our conference.”

The Mountaineers have their next four games on the road as they return to action Thursday against Wofford. They’ll start their Sun Belt Conference run Sept. 16 against rival Georgia Southern.