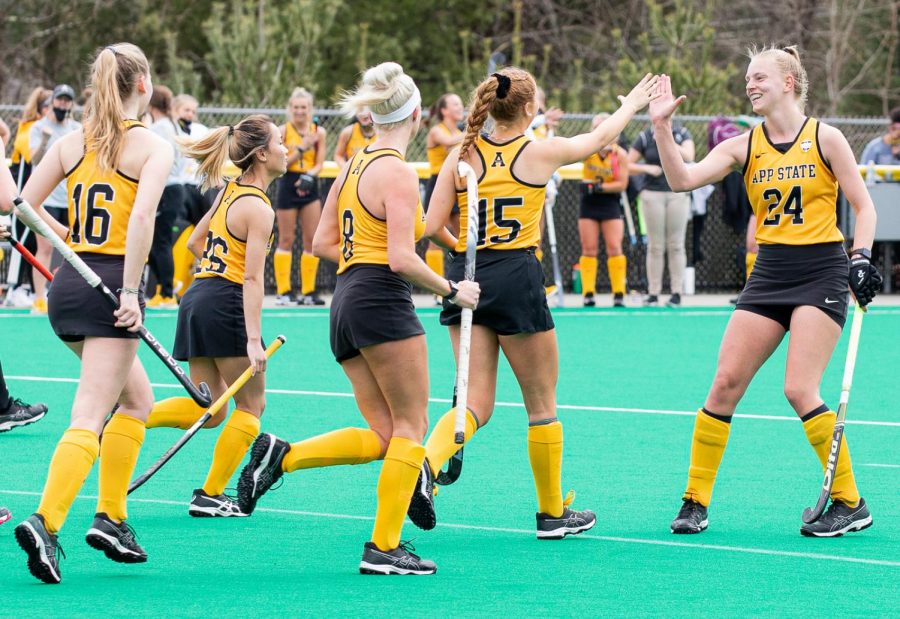 App State field hockey wrapped up its preseason with a 2-1 victory against Queens Aug. 22, finishing 1-1 in exhibition play.

Senior Anna Smarrelli recorded the opening goal in the first half, as the Mountaineers entered halftime with a 1-1 tie. Freshman Charlotte Bosma, who tallied the lone goal in the Mountaineers’ 3-1 defeat against Wake Forest, scored the go-ahead goal in the second half to secure the victory.

“Our mentality is to get better every day,” head coach Meghan Dawson said. “We want to give a hundred percent so that we can keep going and by the end of the season, be closer to our peak.”

Before last season’s tournament was canceled because of COVID-19 protocols, App State advanced to the semifinals in each of the last three Mid-Atlantic Conference tournaments. The Mountaineers finished an irregular spring 2021 season with a 7-9 record after having their fall 2020 season postponed.

This year, eight returning starters and 10 freshmen seek to continue the tradition of post-season runs.

Among the returning Mountaineers are midfielders Smarrelli, Sydney Lee, Brenna Schoenbachler and two-time all-conference selection Friederike Stegen. After playing through an abnormal season, the seniors look to positively impact the program’s culture.

“They want to leave a legacy behind, and I think our coaches can attest to the culture dropping during COVID because we were doing things we wouldn’t normally do,” Dawson said. “They’re taking a leadership role and wanting to leave a big impact on the program.”

For App State, a proper preseason means an opportunity to sharpen their skills and prepare for the regular season. Dawson remarked on the importance of testing the team’s depth and playing to their strengths and weaknesses.

“We gave all of our girls a chance to play, so it’s good to see how they do in a game setting and not just practice,” Dawson said. “It helps our coaching staff know what we need to focus on so that we can set our game plan and go into opening weekend without any nerves.”

This season, the MAC tournament returns with the top-four seeds in the conference earning a spot in the postseason. Dawson emphasized how her team prioritizes accumulating a strong regular season record.

“It’s the top four teams of the conference, and that’s what we want to do,” Dawson said. “That’s our first goal because that will help us achieve all of our other goals.”

App State opened its regular season Aug. 28 against Georgetown and lost 2-3, but won their next game against Towson 3-1. The Mountaineers begin MAC Conference play Sept. 17 against Miami.