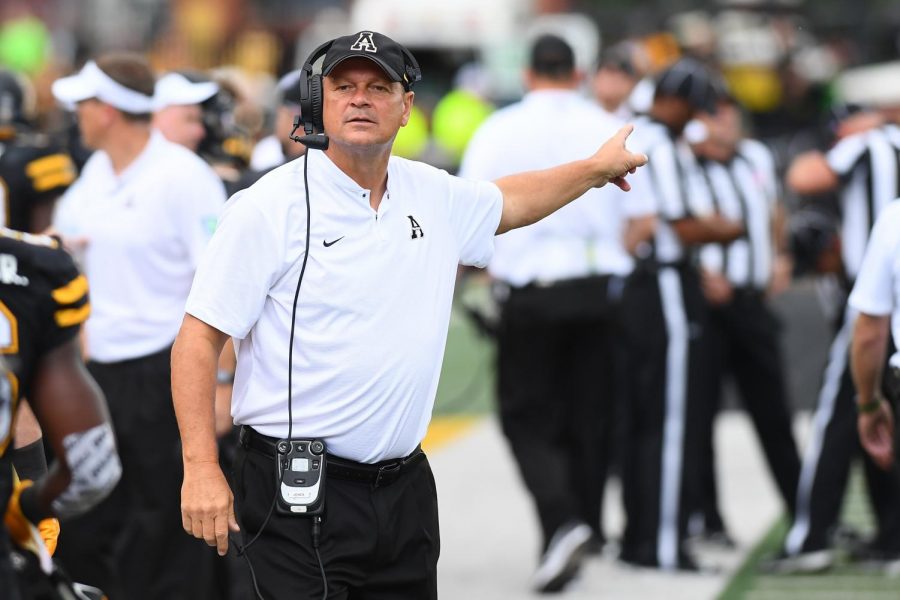 App State defensive coordinator Dale Jones is back for his 24th year on the Mountaineer staff. Jones is part of the third new coaching staff the football program has seen in the last three years.

After App State’s historic 2019 season, the football team is looking to a new coaching staff to be even more dominant this year. It’s the third new staff the Mountaineers have had in three years after Scott Satterfield left for Louisville after 2018 and Eliah Drinkwitz left for Mizzou after last year.

Shawn Clark was named head coach in December 2019 after working as a co-offensive coordinator from 2016-18, and as an assistant head coach last season. Having played offensive guard for the Mountaineers from 1994-98, Clark returned to Boone after coaching stints at Louisville, Eastern Kentucky, Purdue and Kent State.

Under Clark, the new tandem of coordinators Tony Petersen and Dale Jones are working to sharpen skills on each side of the field.

Petersen was named offensive coordinator and quarterbacks coach for the Mountaineers in January. While most recently working as an offensive analyst at Missouri last season, Petersen also had stints coaching offenses at Marshall, Louisiana Tech and East Carolina.

With the Sun Belt’s Preseason Offensive Player of the Year Zac Thomas and other offensive artillery, Peterson expressed his team’s desire to maintain improvement.

“In an offense, you want to run the ball better. You want to throw the ball better. Our receivers want to have more receptions, and bigger, more explosive plays,” said Peterson. “We’re going to go into the game with ball security being a priority, we’re going into games being able to run the football, and win the one-on-one battles on the outside.”

On the other side of the ball, defensive coordinator and inside linebackers coach Dale Jones returned to App State in January after one year working with linebackers at Louisville. Jones previously worked on the Mountaineers coaching staff from 1996 until 2018.

In his first 23 seasons at App State, Jones made player development a staple in his defense, coaching 11 All-American defensive linemen and linebackers, including five players earning the recognition twice. He also mentored 22 all-conference performers, and 12 players have gone on to play in the NFL.

“There’s no question, in this defense, we want those crazy kinds of guys,” said Jones. “When you look at a defensive anchor, they’ve got to be an intimidating presence to quarterbacks.”