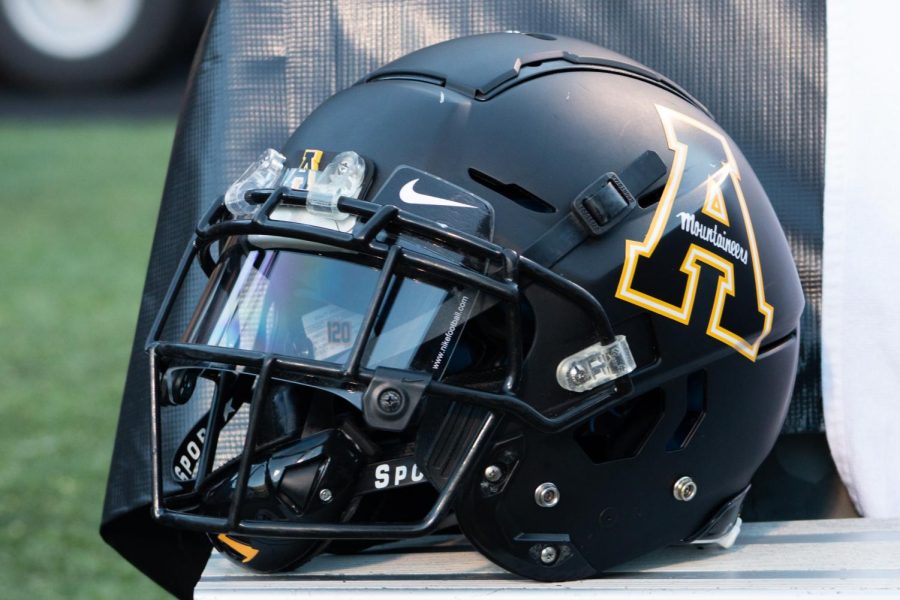 An App State helmet sits on a bench before the Mountaineers' one-point victory over Marshall Sept. 23, 2021.

With 13 starters leaving, App State football went on the recruiting trail in the transfer portal April 10-11, bringing in veteran talent on both sides of the ball.

A total of over 3,000 players in the transfer portal during this cycle led the Mountaineers to bolster the roster. The first came Sunday, bringing in a quarterback from the Sun Belt.

Former Texas State Bobcat Brady McBride is transferring to the Mountaineers for his final two years of eligibility. Similar to the arrival of Brice, Clark opted to find experienced quarterbacks instead of preparing freshmen like Zac Thomas and Taylor Lamb during the Scott Satterfield era.

McBride enters the fold after starting two years at Texas State. The Texas native totaled 3,432 passing yards and 29 passing touchdowns to 17 interceptions during 2020-21 as a Bobcat. Coming out of high school, McBride was a three-star recruit and played in three games as a freshman at Memphis before transferring to Texas State. With transfer rules, McBride didn’t play in 2019.

Coming into a young quarterback room, McBride is a veteran player who struggled at times on a Texas State team that won just six games over his two years. McBride will likely sit under Brice as the backup quarterback in 2022, learning the offense and waiting his turn to take over for the Mountaineers in 2023.

With McBride transferring, Tabscott and Burger could be waiting till their junior seasons to take the field as a starter if they opt to stick it out in Boone. The transfer portal is a new era for college sports, and the Mountaineers are welcoming the change with Brice and McBride.

Similar to the thinning of the quarterback room, App State lost senior cornerbacks Shaun Jolly and Madison Cone, and needed a starter across from super senior Steven Jones. Wake Forest cornerback Zion Keith committed to the Mountaineers on Monday after spending four years with the Demon Deacons.

During his first three seasons, Keith played in nine games but stepped into a starting role in 2021. In 12 games, Keith finished with 37 total tackles and made his second career interception in Wake Forest’s blowout Gator Bowl win.

His role at App State will likely place him outside across from Jones while senior cornerback Nick Ross should start at nickel corner, but he’s started two games at safety and his versatile talent keeps the secondary flexible for defensive coordinator Dale Jones. If Jones starts in the slot, the Mountaineers’ corners will have 12 years of experience at their disposal.

Keith’s 6-foot-1 frame is the opposite of Jolly’s 5-foot-9 stature. His size will be an advantage for App State to defend against the lanky Sun Belt receivers in 2022.

The Mountaineers’ pair of commitments secured the cornerback position this year and gives new offensive coordinator Kevin Barbay time with McBride to prepare for 2023.