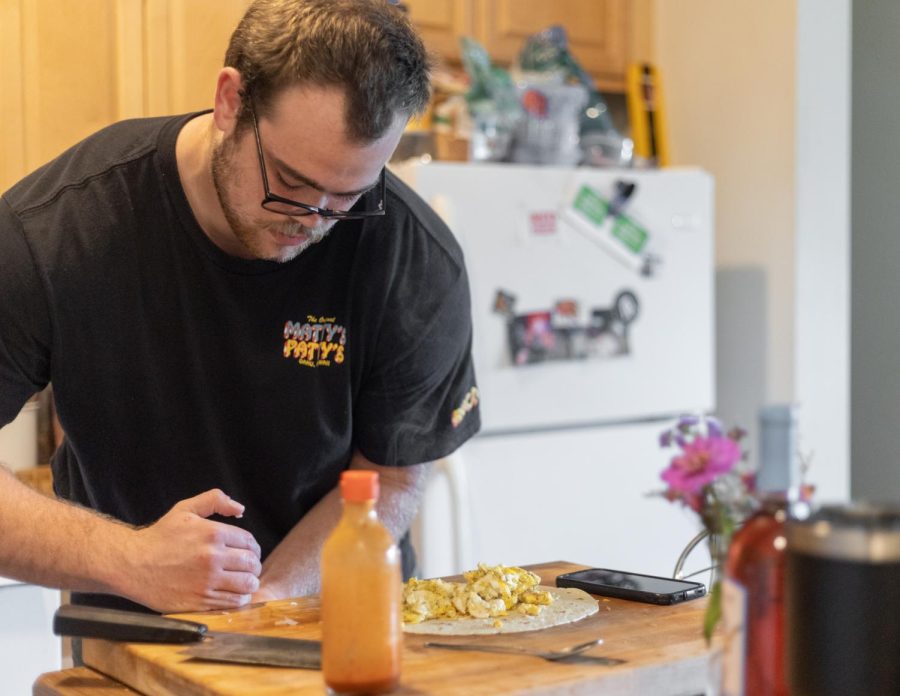 Gage Blackston, senior food systems management major, enrolled at App State to pursue football as a physical therapy major. He decided to undergo a major change once he rediscovered his love of cooking around the same time.

One App State football player is bringing his Lowcountry cuisine to the Big Apple next year to cook up a culinary career.

Gage Blackston started playing football when he was 8 years old. In 2017, he was redshirted as an offensive lineman for App State, but he suffered a knee injury early in the season. While recovering from his injury, he picked up cooking as a way to relieve stress and pass time, he said.

That was when Blackston realized his passion for cooking.

“I think it’s surprising to a lot of people just because I’m really passionate about it,” Blackston said.

His mother, Angela Blackston, said she remembers a conversation she had with Gage’s father when he was little. They were talking about what they could see Gage doing as a career, and she remembers making the comment that she could see him as either an English teacher or a chef. However, she didn’t tell him about this conversation until after he decided to pursue a culinary career.

“His favorite toy was his Little Tikes Kitchen,” Angela Blackston said. “He would always cook in his kitchen. At dinner, he was always able to pick out flavors and ingredients in the food that we would eat.”

Now, Gage Blackston is a senior majoring in food systems management at App State. He said his cooking style is heavily influenced by the Lowcountry cuisine of his hometown in Savannah, Georgia. Food from the Lowcountry typically combines seafood, rice, vegetables and corn, with some of the more common dishes being she-crab soup and shrimp and grits. He blends that with his knowledge of French cuisine, but Gage Blackston said he tries to learn new techniques and cook different dishes every time he’s in the kitchen.

Reilly Williams and her mother Meredith Williams said they wanted to get Gage Blackston a cookbook for Christmas, but they had trouble finding one that he didn’t already own.

“We ended up getting him a cookbook on how to make pasta from scratch,” Reilly Williams said. “I got him a bunch of other things for Christmas, but then when he opened that he got really excited because he’d been wanting that for a while, and it was sold out.”

The first time Gage Blackston cooked for Williams was on their second date, she said. He made chicken salad because he knew she liked it, and she said it was probably the best chicken salad she’s ever had.

When Gage Blackston met Reilly Williams’ family, he cooked them chicken carbonara from scratch. Meredith Williams still remembers that first meal as her favorite Gage Blackston has cooked for them.

“I feel like I like to give and do for people,” Gage Blackston said. “I feel like one of the most special or intimate, at times, things you can do for someone is cook them a meal.”

As a member of the Mountaineer offensive line, Gage Blackston frequently gathers with his fellow teammates for potluck get-togethers. The Savannah native always prepares and brings one of his signature dishes.

“They all think I’m a pretty good cook, not to float my own boat,” Gage Blackston said. “I think it’s evident that I cook probably better than the average college kid.”

Gage Blackston rooms with three other players on the football team, including super seniors Thomas Hennigan and Xavier Subotsch. In their time sharing an apartment, it’s not uncommon for Blackston to treat his roommates to a well-cooked, homemade meal.

“Out of five stars, compared to like the top Michelin star, I’ll give him a three and a half. I’m a decent critic,” Subotsch said. “For where he’s at compared to everyone else his age, he’s pretty good.”

After he graduates from App State in May, Gage Blackston intends to move to New York, where he will attend the Institute of Culinary Education. ICE is an award-winning culinary institution that has produced famous alumni such as celebrity chef and restaurateur Bobby Flay.

Gage Blackston plans to remain in New York after attending ICE and work his way up the culinary ladder. He hopes to become an executive chef or chef de cuisine as he makes a name for himself.

Long-term, Gage Blackston dreams of opening his own restaurant one day.

“I’m super excited,” Gage Blackston said. “It’ll be nice to just go and do something I love to do every day.”