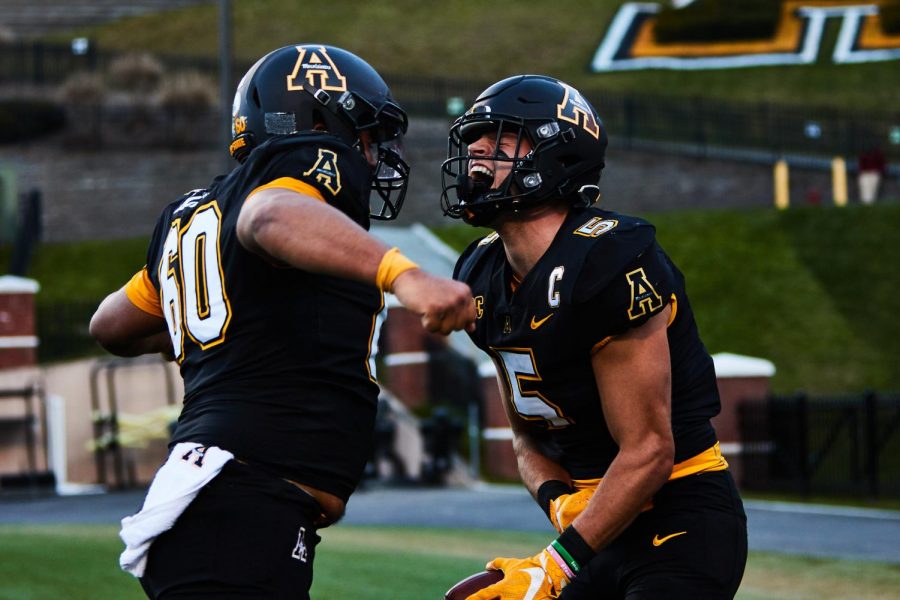 After the 2020 season, App State senior wide receiver Thomas Hennigan (right) opted to utilize his extra year of eligibility granted by the NCAA due to complications from the pandemic. Former teammate Noah Hannon (left) elected to move on from App State.

Four bowl championships. Three Sun Belt titles. Wins at North Carolina and South Carolina, both in 2019. Ranked in the Top 25 for the first time. A combined 40-10 record.

It’s no secret that over the last four years, App State football has accomplished a great deal. The 2020 class of seniors would go down as one of the most influential and successful groups in program history. But thanks to an unprecedented rule change by the NCAA because of the pandemic, most of that group’s seniors aren’t part of App State’s history yet — because they’re still part of the present.

In August, the NCAA granted all fall-sport athletes an extra year of eligibility due to the complications and interruptions of playing a roller-coaster season during a global pandemic. This meant every senior from the Mountaineers’ 2020 roster would have the chance to return for a fifth, and in some cases sixth, year of playing college football.

“I know all of us had very different decision-making processes, and a lot of different things went into it,” super senior wide receiver Thomas Hennigan said. “It was a very unique circumstance.”

After App State ended the season with a dominant win over North Texas in the Myrtle Beach Bowl, 13 of these seniors ultimately decided to take advantage of the extra year and return to Boone for one last ride as “super” seniors. Nine of these 13 were starters for the Mountaineers. So if there’s one thing the roster is guaranteed to have in 2021, it’s experience.

“Those guys have been here — I’m the third head football coach they’ve been through,” Clark said. “So they know what the expectation is, and they know how to lead by example.”

Super senior offensive lineman Baer Hunter has had one of the more unique App State careers. He was recruited as a defensive end and redshirted in 2016. With three games left in the 2017 season, Hunter made the switch from D-line to tight end. The next year, Hunter switched positions again, finding success in his new role at the right guard spot on the O-line, starting 12 games. Over the last two seasons, Hunter started all 26 games at right guard, earning second-team All-Sun Belt recognition in 2019 and first-team honors as a redshirt senior in 2020.

When it came time for Hunter to decide between returning to the Mountaineers for a sixth year or moving on, he said the biggest motivation for him to come back was his need for more film for NFL scouts to see. Four-year starting center Noah Hannon decided to move on from App State after the 2020 season, giving Hunter the chance to shift positions again, this time to the center spot on the O-line.

“I had the opportunity to move to a position that would put me in a better position to try to play at the next level,” Hunter said. “It definitely made me want to stay here more.”

As the most experienced returner to the O-line, Hunter’s positive impact as an individual player is evident. But offensive line coach Nic Cardwell said he noticed something important in spring practice this year he’d never seen from Hunter before: pulling a younger player aside and motivating him.

“In terms of maturity, he brings a wealth of knowledge,” Cardwell said.

Along with gaining more film and developing more as a player in his sixth year, Hunter will be leaving App State with his master’s degree, thanks to being around to take classes when he was redshirting with the team.

The two most obvious impacts the super seniors have on the program are from an actual football standpoint, affecting the game out on the field and from an off-the-field standpoint, mentoring and hleping the younger guys. But Joey Jones, App State’s director of communications for the football team and general sports, talked about another way this group coming back for another year affects the program.

“I think something that’s probably an underrated aspect is the fanbase, and the alums know who these guys are. They’re not having to learn any new guys,” Jones said. “For the fanbase to immediately recognize them just honestly makes our job easier marketing the program.”

Having superstars like wide receiver Corey Sutton, known for highlight-reel touchdowns and spectacular acrobatic catches, and defensive lineman Demetrius Taylor, immortalized for the havoc he wrecked against North Carolina, back for one more year positively impacts the program at nearly every level.

App State die-hards were already looking forward to returning to a packed Kidd Brewer Stadium for a more normal 2021 season. Add in 13 of the most accomplished and memorable players back for an unprecedented extra year? App Nation is counting down the days till kickoff.

“From a fan’s perspective, there’s just so much buzz,” said Landon Judy, App State grad student and Student Yosef Club Vice President. “I’m a part of App Twitter. I’m really involved with a lot of the fans, and to be able to talk to our alums and our season ticket holders and the students in general, they’re excited to get these players back.”

Editor’s Note: Attached below is an audio interview by Silas Albright with App State super senior wide receiver Thomas Hennigan. Press play to hear Hennigan’s perspective on what went into making the decision to return for another year