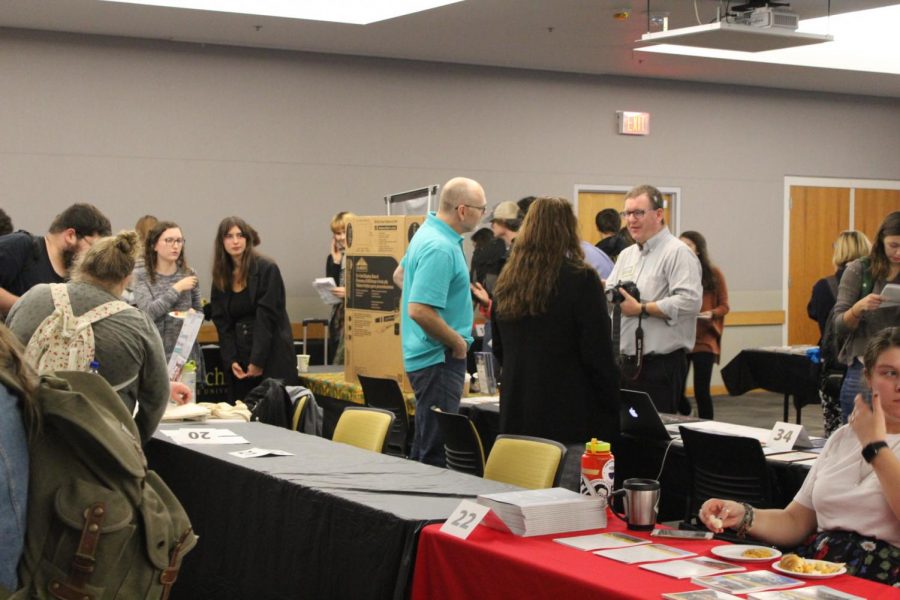 Students gather around many different tables and stations at the Study Abroad Fair to learn about international education opportunities at App State.

With over 5.3 million international students around the world, universities, including App State, are working to globalize their campuses. App State encourages students to make local to global connections, this time with the Education Abroad Fair.

The fair, which took place Oct. 30, featured over 20 faculty-led programs, several international students currently studying at App State and students who participated in different summer or semester exchange programs. The fair was hosted by the Office of International Education and Development.

“It’s eye-opening. Learning how to survive in another society, learning that people are different and that our way is not the only way,” said Nina-Jo Moore, assistant chair and professor in the communication department. “I hope everybody gets the opportunity to (study abroad).”

Moore has led a program to Poland for 20 years, where students travel to several cities in the country and study communication. Moore said she covers many topics, including intercultural communication, the Holocaust and ethnocentrism.

In the 2016-17 academic year, the Institute of International Education’s ranked App State sixth for Master’s Colleges and Universities for total number of study abroad students.

Ethnocentrism is “the attitude that one’s own group, ethnicity, or nationality is superior to others,” according to Merriam Webster.

Janine Barten, a graduate student studying political science, international relations and comparative politics, studied abroad at App State from the Netherlands and came back to the university for graduate school.

Barten said studying abroad changes your view on the world.

“It’s interesting because in the U.S., there’s different perspectives on issues, so I find that really interesting to compare that to my European experience,” Barten said.

Lola Cottele, who is studying abroad from Belgium, said App State is very accommodating for international students and has a large international community.

Cottele, a junior social work major, said App State and International Appalachian have organized many events and outings for international students, such as hikes and attending a rodeo.

“You start to learn and appreciate your own culture and what you have,” Cottele said.

Christopher Lytle, director of the Education Abroad Office, said the number of students interested in going on international experiences has “grown considerably.”

Lytle said the university has put a focus on “global experiences,” which include studying abroad, taking a global learning outcome course or being a part of an international student organization.

“Global experiences have encouraged development of personal qualities, like independence, patience, ability to deal with ambiguity,” Lytle said. “In today’s world, no matter what your job or career is, you’re going to have to be able to communicate across language barriers, across cultural barriers, so that’s what this global learning gets at.”

Lytle said developing international relationships is important on all levels, from countries down to universities.

Study abroad experiences should not be one-sided in nature; both, universities and students, should benefit, Lytle said.

“We recognize that we probably won’t get to a place where 100% of our students have an international experience,” Lytle said. “We do hope that 100% of Appalachian students explore what sort of international and global experiences are available.”