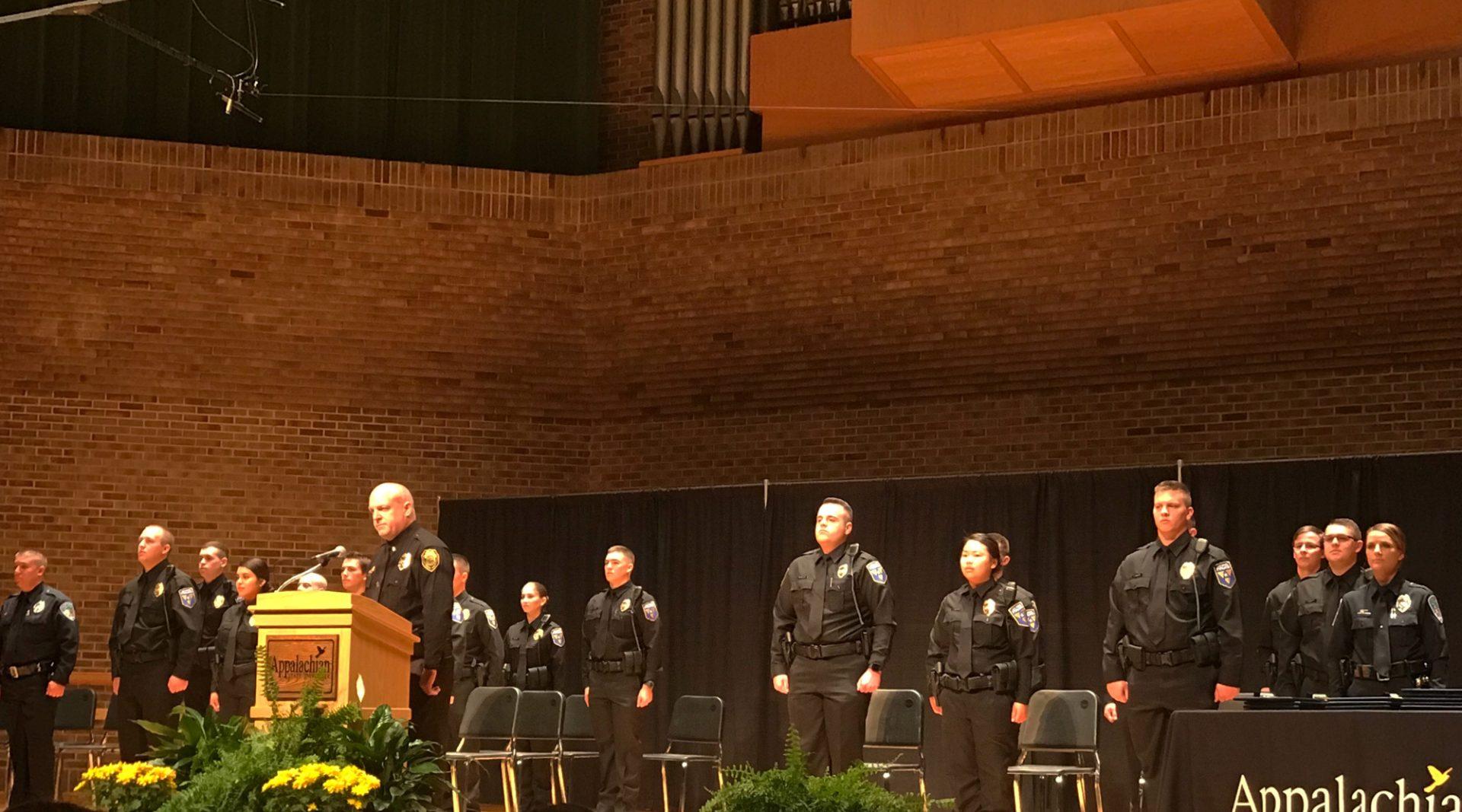 Police cadets find their places on stage at graduation after completing 660 hours of training. The majority of graduates will continue their career by working part-time with University Police.

Graduates lined up and awaited their turn to state the code of ethics and officially be sworn in, while parents and families chatted amongst themselves. Emotions were high and each family member expressed how proud they were of their graduate.

“I’m sad, I’m excited and I’m looking forward to his experience because a lot of these experiences are not going to be positive. It’s learning to become an adult,” Elizabeth Cooper, parent of a police cadet, said.

While some family members took time to express their excitement for their graduates, others offered advice.

“Be prepared. Make sure it’s something you’re enjoying doing. Always make sure you have a passion for it,” Denise Helms, parent of a police cadet, said.

Andy Stephenson, chief of police, stated in his remarks that the biggest piece of advice he had received in his career was “don’t train until you get it right, train until you can’t get it wrong.”

Graduates also gathered in the lobby before the program and reflected on who or what inspired them to join the police force.

“It was just helping people. That’s what I wanted to do for a living. I just wanted to go out and help people and even make a difference in one person’s life,” Ferrin Page, police cadet and graduate of App State, said.

Joseph Scott, graduate from the police cadet program and sophomore at App State, said that the law enforcement influence throughout his life and his middle and high school resource officers inspired him.

Once all graduates were officially sworn in, the program continued and families found their seats. Police cadets made their way to the stage. After the Pledge of Allegiance, Lieutenant K.C. Mitchell, training director, began his welcome speech.

The police cadets underwent 660 hours of training with the minimum being 632. Police cadets were also required to take 36 tests and the overall average was 94 percent, according to Mitchell.

After graduates walked across stage and received their certificates, some graduates also received awards. Hopkins was honored with an award for his work and efforts.

Featured photo caption: Police cadets find their places on stage at graduation after completing 660 hours of training. The majority of graduates will continue their career by working part-time with University Police.