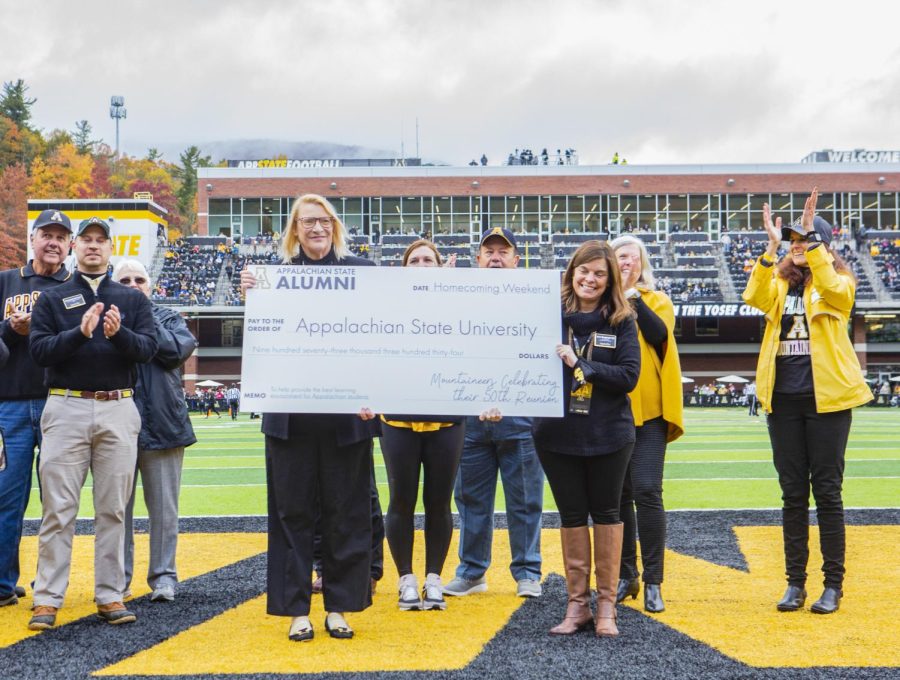 App State Alumni Affairs honored the classes of 1970 and 1971 with an on-field recognition at the homecoming football game Saturday.

Every year, Alumni Affairs recognizes the graduating class celebrating their 50th reunion. This year, App State honored two classes because the class of 1970 did not get a recognition last year due to the pandemic.

“We have members of that class that are gonna come and be on field so we can recognize them and just thank them for their continued support of Appalachian for over 50 years,” said Stephanie Billings, executive director of Alumni Affairs.

Alumni were spotlighted on the field in between the first quarter and second quarter of App State’s game against University of Louisiana Monroe. Despite the overcast weather, the alumni were glad to be back at The Rock.

Bennie Anderson, class of 1970, said his strongest memory of App State was when he attended a snowy football game with his late classmate.

“I remember the snow. They had to scrape it, and it was like 18 inches before a game,” Anderson said. “That was about ’68 I think. That was a big memory.”

Pat Peacock, class of 1971, said it felt good to be back at The Rock and recalls all four years at App State as a “great experience.”

During the recognition, the Alumni Association presented a check for $973,334 to App State accepted by Chancellor Sheri Everts for the class’ “reunion giving.”

Alumni Affairs also holds Black and Gold Reunion Weekend in the summer for the class celebrating their 50th anniversary.

“It’s such a special weekend because sometimes people haven’t seen each other in 50 years, and they just pick right back up where they left off,” Billings said.

The alumni recognition fell at the end of homecoming week and was one of many activities held to highlight graduates. Alumni Affairs also held the Alumni and Friends Breakfast Saturday morning, which in the past has been held at McKinney Alumni Center but was moved to Leon Levine Hall of Health Sciences this year.

“The reason we decided to do that was because it’s so much easier for people to park there, and it gives people a good amount of space to spread out,” Billings said. “We’re also extremely proud of what they’re doing in that building, so for a lot of our alums that haven’t been on campus in a while we feel like that would be a good way for them to visit this new academic building.”

As a part of their annual engagement plan with alumni, Billings said Alumni Affairs has been planning homecoming activities for about a year and more seriously for the past six months.

“We’re just very excited. This is one of our favorite times of the year,” Billings said.