O’Keefe is the new face of men’s soccer 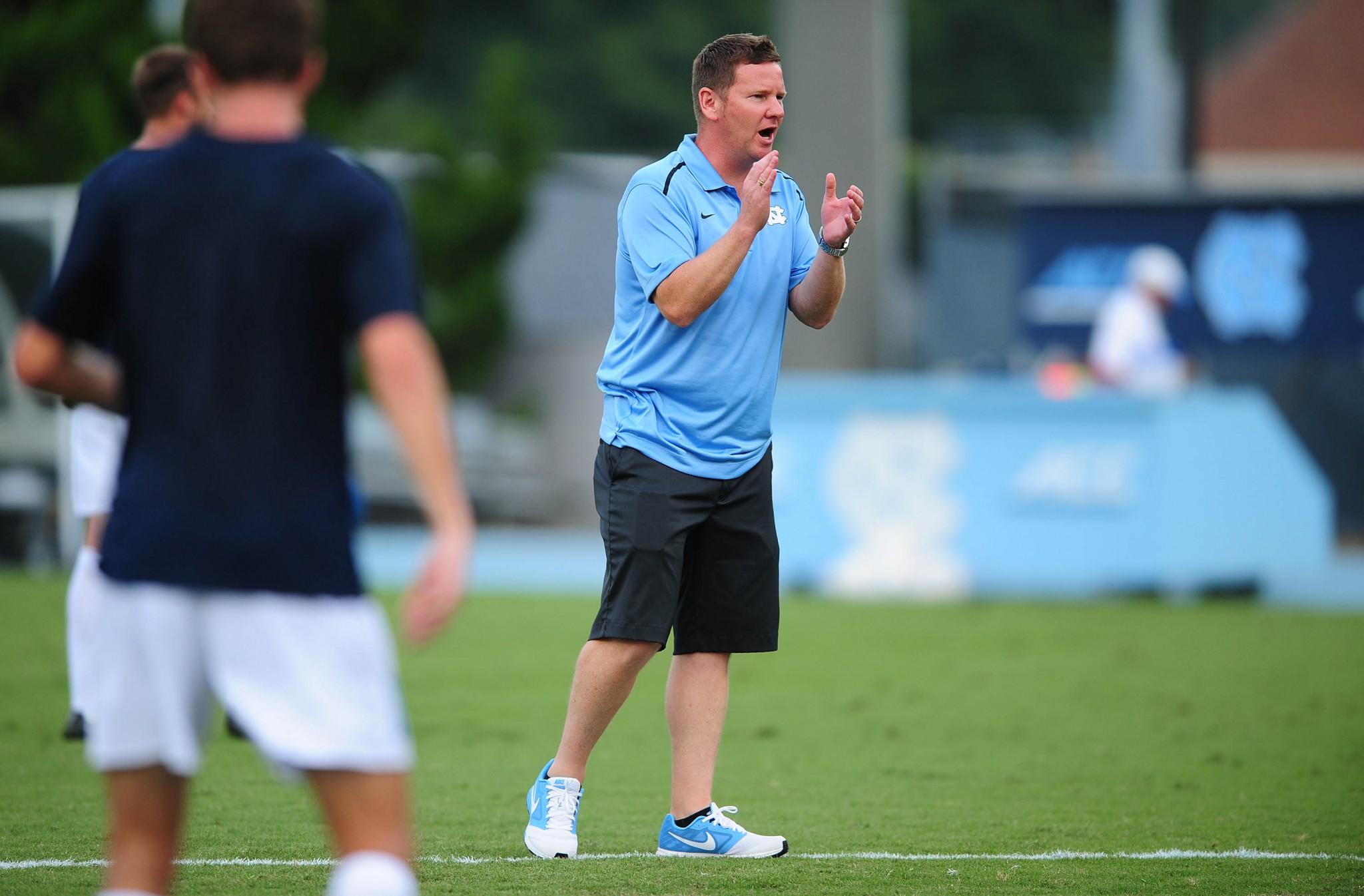 Appalachian State men’s soccer will have a new face leading the charge this fall with the hiring of the 12th head coach in school history, Jason O’Keefe, a 16-year coaching veteran who was most recently an assistant coach and recruiting coordinator at University of North Carolina at Chapel Hill.

App State director of athletics Doug Gillin announced the decision last Wednesday and the press conference for new coach O’Keefe was held that Thursday where he met the media and student athletes for the first time.

“This transition period has not been easy on anybody but the student athletes have handled it gracefully,” Gillin said.

O’Keefe has been in the collegiate coaching business for a little over 15 years now. He began his career as an assistant coach at Greensboro College, his alma mater, where he earned a bachelor’s in history and received a United States Soccer Federation “A” license and a National Soccer Coaches Association of America advanced national diploma.

“I’ve envisioned this moment for 15 years and you guys, [media and student athletes], set a tone for what I can expect from App State and our athletic program of men’s soccer,” O’Keefe said.

O’Keefe was a student athlete himself at Greensboro and helped lead the Pride to a 1996 South Region championship and the 1994 Dixie Conference title.

One of the main things Doug Gillin found in the hiring of O’Keefe was the well-polished resume he showed.

“We aspire to compete in the NCAA tournament. As we started looking for our next head coach, the four letters NCAA is something in coach O’Keefe’s bio quite a few times,” Gillin said. “That is somewhere we wanted to get back to and some of the history and success we have had here at App State.”

O’Keefe’s most crowning accomplishments have come over the last two years at UNC, where he helped the Tar Heels finish in the top 10 twice and helped recruit the current No. 1 class for 2016, according to TopDrawerSoccer.com.

“I was able to grow at UNC and develop and continue to build on my philosophy to prepare me for this day,” O’Keefe said.

But even without UNC on the resume, O’Keefe has flourished seemingly everywhere he’s gone. As an assistant coach at Saint Louis from 2010-13, O’Keefe helped lead the Billikens to two Atlantic 10 Conference Championships in 2012 and 2013. The team was also ranked No. 1 in the NSCAA Mid-Atlantic Region during those years. O’Keefe was named NSCAA’s Mid-Atlantic Assistant Coach of the Year for the 2012 season, and in 2013 was tabbed as one of the top-15 coaches in the nation by CollegeSoccerNews.com

O’Keefe was also an assistant coach, and then associate coach, at Elon University from 2007-09, where he helped lead the Phoenix to their first regular season SoCon Championship in 2008. He also recruited Chris Thomas, the 2009 SoCon Freshman of the Year, as well as the 2010 and 2012 SoCon Player of the Year.

In his lone season at Cincinnati in 2006, O’Keefe helped lead the Bearcats to a Big East Conference Championship, their first in school history.

Appalachian State, arguably known for its football, has O’Keefe ready to try and make Mountaineers men’s soccer a sport to be talked about on campus. He said that he has already seen the word being spread in a positive way.

“People are writing, tweeting, posting and messaging about Appalachian State men’s soccer. We want to keep that momentum and give people positive things to write about,” O’Keefe said.

Possibly one of the most intriguing parts of coaching the Mountaineers for O’Keefe was hearing they have the highest GPA for male student athletes at App State.

“This is a big stepping point. I’ve never worked with a men’s soccer program that has the highest GPA on campus for male student athletes, so I am hoping to raise the bar even more,” O’Keefe said.

Communication, commitment, gratefulness, energy, caring and consistency are the main goals that O’Keefe continually mentioned as his vision and pillar for Mountaineer soccer.

“We want to compete for championships. We want to win everyday, compete everyday, one day at time,” O’Keefe said. “It’s not going to be built tomorrow but it will take consecutive days of hard work.”

He is hoping he will be able to show some of the current players traits that they may have never known they had before.

“I’m hoping that some of these guys have things inside of them that they had no idea was there and I can help them bring it out,” O’Keefe said.

Recruiting may not be O’Keefe’s main focus at the moment, but he knows once the process begins, he will be able to positively speak about Appalachian.

“Its an unbelievable campus and community,” O’Keefe said. “The academics and relationships attract people.”

The brand of soccer for the Mountaineers is expected to change with O’Keefe at the helm, and with a foundation of hard work, O’Keefe said a winning brand is right around the corner.

“It’s going to be a hard working, blue-collar brand [of soccer],” O’Keefe said. “You have to work unbelievably hard and it will be an evolution over the next few months.”